Crude Bubbler: There Will Be Blood 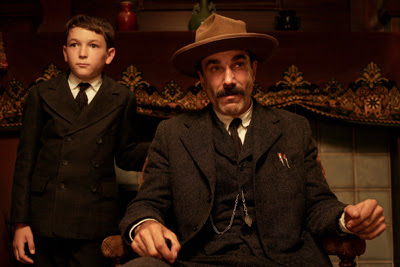 [With the Academy Awards approaching, this week The Cooler is posting reviews of the Best Picture nominees, written upon the films’ release in the author’s pre-blog era. Feel free to use the comments section to argue why your favorite nominee should win or why any of these films didn’t deserve to be nominated.]

Tension runs beneath the surface of There Will Be Blood like the oil that bubbles up from the ground and consumes its main character. The title of writer/director Paul Thomas Anderson’s fifth film is a promise, and so every moment of the 158-minute picture is saturated with a sense of ominous premonition. Very loosely based on about 100 pages of Upton Sinclair’s 1927 novel Oil!, Blood is a flawed but fascinating snapshot of the American West at the turn of the 20th Century, a time when an anonymous man could still literally climb up out of a pit in the earth and reinvent himself as a tycoon.

All that such a man required to succeed was the single-mindedness of purpose to do so. And in Blood, Daniel Plainview certainly has that. At the beginning of the film, which goes some 10 minutes without dialogue, we find Plainview digging in the ground for silver. As quickly as he finds a piece of glistening rock big enough to celebrate, he falls down his mineshaft and snaps his leg. For a few seconds afterward, we watch Plainview huffing and grunting as he strains to climb out of his mine without the use of his mangled limb. And when he reaches sunlight, we realize that his ordeal is just beginning: the camera pans to show nothing but open plains and craggy hills. No sign of a wagon or a horse to pull it. The one-legged Plainview is all alone and miles from civilization.

While those sweeping shots of vast nothingness provide the first example of the magnificent cinematography exhibited throughout the film by Robert Elswit (Anderson’s usual director of photography), the next image is a credit to editor Dylan Tichenor, and probably also to Anderson, who is a meticulous filmmaker. From the isolation of the California desert we cut to the interior of an assayer’s office, where Plainview lies on the floor, his leg now in a splint, waiting to be paid for the silver that he managed to haul out of the desert along with himself. There isn’t a word spoken about how Plainview made it out and over those fortress-like hills, as if an explanation isn’t required. And that explains everything: Plainview got out because he wanted to, and nothing was going to stop him. Simple as that.

And so the rest of the film unfolds, in grander scale, in greater length and with more nightmarish foreboding, but never more to the point. Plainview will become wealthier, cockier and, eventually, more maniacal. He will find an earthen treasure more valuable than silver – oil – and follow it until he runs out of land fit for drilling. He will develop rivals and, one way or another, defeat them all. He will take in an orphan boy who he first intends for a prop and then comes to love and then reduces to a prop again. He will trust in a man he’s never met before, and for the first time feel like he belongs to something. He will graduate from the makeshift manor of an entrepreneur most at home in his oil fields to a magnificent mansion befit for only the most prosperous of men. But Daniel Plainview will never evolve. He will remain throughout the same man who crawled out of the desert on a broken leg, consumed by a thirst for fortune.

If that makes it sound as if Blood is a one-note symphony, I’ve both nailed it and misled you. To be sure, Anderson’s film isn’t as epic in narrative as it is in appearance, length or performance: the man Plainview becomes is entirely foreseeable because the film’s dramatic arc is reserved for its American setting instead of its protagonist. Anderson’s film is in many ways a commentary on capitalism, opportunism and greed rather than a character examination. But at the same time, Plainview is an always arresting centerpiece, and it’s refreshing to encounter a protagonist who doesn’t evolve so much as snowball and who doesn’t devolve so much as deteriorate. It would be overstating things to call him an entirely original character, but it’s accurate to call him an individual.

Plainview is played by Daniel Day-Lewis in a much buzzed about performance that’s likely to be long remembered. Reportedly, Day-Lewis is the actor Anderson had in mind when he began to write Blood, and one can easily understand why: what better choice is there to play an intense, single-minded oil pioneer than the actor known for pouring himself so deeply into his parts that he often remains in character throughout a shoot? Day-Lewis’ portrayal falls somewhere between his work in My Left Foot (astounding for its physicality and metamorphosis) and Gangs Of New York (notable for its blend of sincerity and showiness). He wears a crooked nose, a thick mustache, a limp from the mineshaft mishap and an accent that many critics have pointed out is a spot-on impression of John Huston. But what overwhelms about Plainview is his squint of unwavering determination. Day-Lewis makes him an unstoppable force of nature.

Perhaps it’s well and good then that Blood ends as it does; the aftermath of a natural disaster is often harder to endure than the event itself. Still, the third act of Blood isn’t nearly as fulfilling as the first two. Anderson’s film thrives early as Plainview’s oil empire takes shape in Elswit’s panoramas: a barren landscape becoming a single oil derrick and then a field of them. The groaning strings of the noisy score by Johnny Greenwood bring to mind the shift of tectonic plates as Plainview divides and conquers this remote California land as if the blow from his pick had fractured Pangaea. All the while Paul Dano provides an interesting point of reference as Eli Sunday, a young preacher trying to build his Church of the Third Revelation who realizes that wealth and celebrity can be mined from more places than the center of the earth. Like the vibrations of a derrick before a gusher, these elements suggest a forthcoming explosion, but it never arrives.

When it runs out of things to chase, Blood, like its main character, loses its sense of self. The movie is at least a restaurant scene too long and a shrieking Dano too absurd. The ultimate destination of the story – though sure to be loathed by many – is defendable, but its implementation as a perfunctory epilogue is not. For two hours, this picture moves with purpose. Then it settles for ordinary. Anderson has here a near masterpiece that I’m afraid I’ll remember more for its eccentricities than its genius.
Posted by Jason Bellamy at 9:47 PM

In my opinion, this was the year's best film - incorporating a compelling story and a fascinating character, masterfully performed by Day-Lewis. Of the 88 films I saw in 2007, this one kept my attention the most with its sense of mounting dread and the gripping nature of Day-Lewis's presence on the screen. This film is still on my mind.

Hokahey: "There Will Be Blood" is impossible to forget. I was held by its grasp until the third act. And for me the letdown didn't have to do with milkshakes or bowling pins. It had to do with the huge leap forward in the story (in terms of years) and the fact that the relationship between Plainview and Eli Sunday was exactly where we'd left it before. As a result, "Blood" shifts from feeling like a character-driven piece to one that suddenly seems concerned with plot mechanics. Keep in mind, it's still an extraordinary film. Perfect in parts. But that's why I like "No Country," and a few other films this year, better. Thanks for the comment!