By the Book: Smart People 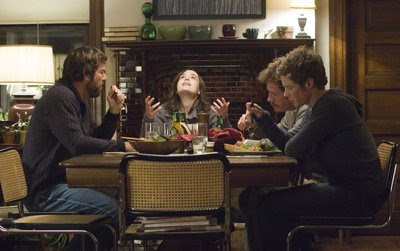 When you’re watching a movie and a grown-up character is constantly reminding the people around him that his visiting brother is adopted, you can be sure of at least one of two things: either the character is a major boner or the screenwriter is sadly unimaginative when it comes to conveying the scars of fractured brotherhood. In Smart People, it’s both. The boner is a college professor of Victorian literature played by a bearded and frumpy Dennis Quaid. The unimaginative screenwriter is Mark Poirier, a novelist making his screenwriting debut. The adopted brother is a jobless drifter played by an unkempt, mustachioed Thomas Haden Church. And in this movie everything is as it seems.

The film’s cookie-cutter approach to character construction began before its actors made it into the makeup trailer: One brother is named Lawrence, the other goes by Chuck. I’ll let you guess which is which, but here’s some help: Have you ever met an uptight, unjustifiably arrogant English professor named Chuck? How about a slacker named Lawrence? Yeah, me neither. But take Quaid, stuff a lumpy pillow down his shirt and give him a limp and, wham, you’ve got yourself a Professor Lawrence Wetherhold! Then take Church and give him Ty Pennington’s hairdo and chin whiskers a porn star’s mustache and, bam, you’ve got yourself a slacking Chuck – rolled joint not necessary until Act 2. With microwave-ready clichés like these, why cook, right?

Actually, that is right. Smart People’s overall design may be uninspired, but it works to the degree that it does because it sticks to its formula. A knee-jerk knock on the film would note the characters’ lack of evolution, but that’s kind of what I like about it. To expect a Devil Wears Prada makeover within a college English department would be foolish, so it’s refreshing that Smart People stops short of providing one. This is a movie that only hints at the possibility of change, as if fully aware of how arduous change can be. And perhaps Proirier simply doesn’t know how to write metamorphosis any more than he knows how to write years of pent-up family hostility, but I’ll give him the benefit of the doubt and assume that, on some level, Smart People is attempting to keep it real.

In that regard, the film is more successful than it deserves to be. (Mild spoiler warning) The plot includes an unexpected pregnancy, an inappropriate kiss and an overdone yet incomplete running gag about car sickness, yet the characters remain surprisingly believable. For that, you can credit the acting. Quaid will never be confused with Daniel Day-Lewis, but his gruff performance here reminds that the main thing keeping him on the B-list is his habit of showing up in B-movies. Church, meanwhile, approaches Chuck with the ease of an actor who realizes that 95 percent of the part is to take it easy. Then there’s Ellen Page, who as Lawrence’s daughter Vanessa looks just as comfortable playing a brainy girl who always sits up straight as she did playing the whip-smart, slouching Juno MacGuff. Sarah Jessica Parker manages to convince us that her beautiful Janet, one of Lawrence’s former students, sees her former professor’s inner Dennis Quaid. And Ashton Holmes occupies space as Lawrence’s son James, which, unfortunately, is all the character is asked to do.

The similarities between this Noam Murro-directed film and Noah Baumbach’s latest dysfunctional portraits are obvious, right down to the facial-haired English department pretension and professional bitterness, and Smart People nestles somewhere between the two. It isn’t as ugly as the laxative of hopelessness that is Margot At The Wedding, yet it isn’t as entertaining (or as powerful) as The Squid And The Whale. If Squid, like an editorial cartoon, exaggerates ever so slightly in all the right places in order to find a deeper truth, Smart People is more akin to a scientific drawing in a biology textbook: realistic almost to the point of boredom. Jeff Daniels’ Bernard Berkman is so terrifically pompous that we actually enjoy spending time with him, whereas Quaid’s Lawrence is genuinely disagreeable, thanks in large part to the influence of his daughter, whose sole emotional nourishment comes from watching her father detach from the world to seek her elitist company instead.

With a plot that at best seems obligatory, Smart People doesn’t have any grand designs, but then most people don’t either. The picture merely gets by, laughing whenever the opportunity presents itself, usually thanks to Church’s enjoyable scene-stealing. These days, lots of dramedies come overstuffed with misfits, outcasts and fuck-ups, so it’s nice to find a movie that doesn’t confuse idiosyncrasy with cleverness. Then again, this is a movie that drifts in and out of its characters’ lives so effortlessly that it sometimes feels adrift. Smart People never invests our emotions enough to win us over as a drama, nor does it tickle our funny bone regularly enough to satisfy as a comedy. It just is, which is enough to hold our interest for 95 minutes, but not enough to make this a film worth holding on to.
Posted by Jason Bellamy at 6:09 PM

Saw this last night. I felt no investment in any of the characters whatsoever. Maybe the step-brother was a little funny, but that was it.

Rob is mad because he thought when someone finally made a movie called "Smart People" it would be his life story.

The previews make it look decent, but your review makes me question whether or not it's worth it.

Sarah Jessica Parker is a tough one for me. I don't know if I can watch her in anything except Sex in the City. Although, I will admit that I thouroughly enjoyed The Family Stone.

Completely off-topic...Rented "Before the Devil Knows Your Dead."

I am not home this weekend and therefore do not have access to the Bellamy Awards. Just curious as to what your thoughts were.

A-Ross: As Rob's comment implies, I'd give "Smart People" a pass. It's not so horrible that it's painful to sit through (at least for me), but it's not worth seeking out.

As for SJP: It's funny, because this is the second time in a week that someone has mentioned liking her in "The Family Stone." I saw "Family Stone," and I've always kind of liked Parker, and I can't remember her from that movie. By process of elimination, I presume she was the one being put through the wringer while falling out of love with one member of the Stones and falling in love with another, right? (Because, you know, THAT always goes over well in families.) I have no memory of her in that movie, just the players around her. Strange.

Oh, and I panned "Before The Devil." Bits and pieces of the acting are impressive, but the movie is crap. I have no idea why so many critics fell in love with it. Your thoughts?