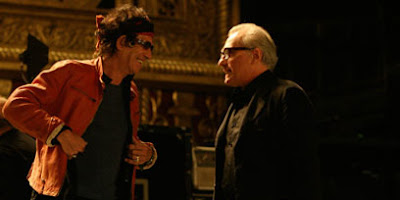 The Rolling Stones-Martin Scorsese rockumentary Shine A Light provides what for me were two jaw-dropping surprises. The first is that the Rolling Stones still bring it. These rockers who formed a legendary band in the 1960s and now are performing in their 60s are as good as ever, at least to my untrained ears and eyes. They are showcased here playing at Manhattan’s Beacon Theatre in the fall of 2006 as captured by what Scorsese called “the best cameramen in the world” and as edited by David Tedeschi, who worked with Scorsese on the Bob Dylan documentary No Way Home. Yet there seems to be little benefit to Scorsese’s expertise or the contributions of four Oscar-winning cinematographers (Robert The Aviator Richardson, John Braveheart Toll, Andrew Lord Of The Rings Lesnie and Robert There Will Be Blood Elswit) as well as three cinematographers waiting for their Oscar just due (Stuart The Piano Dryburgh, Emmanuel The New World Lubezki and Ellen Eternal Sunshine Of The Spotless Mind Kuras). And that’s the second surprise: Scorsese & Co. are freeloaders here.

At least that’s my view. The way I see it, you can conclude that the Rolling Stones’ musical act is as decrepit as Keith Richards’ face and thus is resurrected to Adonis-like perfection by movie magic, or you can decide, as I did, that the Stones just plain rock and that all Scorsese brought to the party were some really big cameras that made the concert’s footage fit for IMAX. I mean, really: other than injecting himself into the opening and closing of the film, what is Scorsese doing here? Bear in mind, I’m not questioning his pedigree. The guy edited Woodstock for crying out loud. But here Scorsese and his team of all-star cinematographers are a flamethrower being used to light a match. The Stones would have burned plenty fine on their own, thank you.

And they do. Though playing a slate dominated by know-‘em-by-heart hits from the 60s and 70s, the Rolling Stones aren’t remotely a shadow of glory past. They tear up the Beacon like a band ready to make it today. Sure, Richards looks like a dizzy gypsy, the skin of his face resembling wide-wale corduroy. Sure, drummer Charlie Watts looks a lot like Bob Simon, the silver-haired reporter on 60 Minutes. Sure, Ronnie Wood looks like he’s trying to cling to his youth by wearing a haircut from the 1980s. Sure, Mick Jagger looks a bit ridiculous shaking his ass at women young enough to be his granddaughters. So what? It takes all of one song to get over one’s skepticism that these guys are washed up. By two songs you’ll be fully convinced they legitimately rock. And by three songs you’ll realize that Mick Jagger is in much better shape than you are and that the Stones aren’t just one of the greatest music acts ever but one of the greatest acts on the planet right now.

But the Stones do that on their own. They don’t need Scorsese’s help. And sometimes the director is a hindrance. For starters, he’s Jagger-obsessed. Solo artists spend less time under the spotlight than Mick does here; there were moments watching Shine A Light when I thought my only hope of seeing Richards or Wood was to have Jagger walk by them. Meanwhile, Scorsese – generous in his screen time for a pair of unknown backup singers (one of them busty, no surprise) – often forgets to check in on Watts. I’d need to see the film again to be sure, but in my memory entire songs go by without a decent glimpse of the drummer, even though he’s an established figure of the band. Regardless of whatever else is going on, when Mick moves, Marty is there. And Mick moves a hell of a lot. His recognizable yet indescribable strut – something like that of an electrocuted rooster – is no less absurd than it was in the Stones’ heyday, but then it’s no more absurd either. It’s just Mick.

And, to be sure, Jagger’s passionate performing demands attention. His energy dominates the room – and that’s indeed what the Beacon feels like when hosting the Stones: a modest room. The following expressions are clichéd, but at times it’s as if the Stones really might raise the roof or blow the doors off the 2,600-seat theater. The lucky few to catch the show (Bill Clinton on his 60th birthday, pretty young blonds and, hey, is that Bruce Willis standing in front of the stage wearing a yellow cap?), witnessed the arena-packing Stones in about as intimate a venue as one could imagine. But while Scorsese and his team do well to capture the festive mood, the theater’s limited square footage might be to the film’s detriment. How else to explain why the vast majority of shots – varied by angle, though they are – capture the action from a mid-range depth that forgets the performers have legs, or even navels?

Only Jagger gets a regular full-body checkup. Richards, perplexingly, is often caught from behind, as if the chords for “Shattered” are still a tightly kept secret. If not for the guest appearances of Jack White, Buddy Guy and Christina Aguilera, plus Jagger’s occasional wardrobe changes, Shine A Light’s tableau would have grown stale in a hurry. In some ways it does anyway. And Scorsese’s use of archival interview footage – enjoyable though it is – is so fleeting that it’s inconsequential at best and a frustrating tease at worst. Shine A Light isn’t a documentary, it’s a concert caught on film, which is to say that it’s closer to a coffee table book than a biography. And that’s fine. But we didn’t need Scorsese, 16 cameras and about as many award-winning cameramen to be thrilled by the spectacle.

With strobe-lit cuts and a forced dramatic episode about the unpredictability of the show’s playlist (as if there hadn’t been rehearsals, as if there weren’t enough cameras on hand to cover just about anything), Scorsese is a director trying to justify his position at the helm of a ship that sails itself. That said, Shine A Light includes one filmmaking decision that’s absolutely brilliant: When the camera leaves Mick to find another performer, the sound level of the element in the foreground is often lifted ever so slightly so that we can appreciate its contribution to the aural mosaic. That means we get to experience Watts on the drums, or the guys in the horns section, or the busty backup singer’s pipes or even the electronic "click" of a digital camera held aloft by a fan. Impressively, the quality of the song being played is never compromised by these modest enhancements of the often overlooked. And so for that – and for a goose-bumps worthy close-up of Buddy Guy gazing into the distance – the filmmakers deserve kudos. What they don’t deserve is equal billing. Shine A Light is a Stones movie, period. Anyone who suggests otherwise needs to lay off the champagne and reefer.
Posted by Jason Bellamy at 9:07 PM

Another excellent review, Jason. I liked this movie, as you know, but I think you make a couple of excellent points -- the middle-focus shots, the superfluousness of Scorsese -- and I love your ending line.

Still, I think it's too easy to say this is all Stones, that they don't need Scorsese's help. True, I suppose, but I personally have never seen a Rolling Stones concert. To be in the middle of one, and in Imax no less, is a real treat. And why do I have this treat? Because Scorsese's a huge rock fan and chooses to use his time and name and rep to get the picture made. Nicely done, too. For that I thank him.

You're right, a lot of people could have done the same thing. But nobody did.

Mark: Good point. I agree: the best thing about Scorsese is that he wanted to do it and got it done.

In addition, I have no doubt that the Rolling Stones brought something special to the show, beyond the guest performances. I've never been to a Stones concert either, but something tells me that Mick doesn't sing "As Tears Go By" with such emotion (if at all) at their arena shows. And the controlled environment made Keith Richards' plugged-in 12-string sound especially sweet there.

Still, when you look at the lineup of cinematographers that Scorsese brought along, "Shine A Light" is surprisingly unimpressive from a visual presentation standpoint. With the same product and anyone other than Scorsese attached by name, "Shine A Light" goes straight to DVD, along with any other concert "film" from Shakira to Beyonce to Springsteen, whoever.

I wish now I'd seen the U2 Imax movie that was here for two weeks before this one.