Messaging Through the Medium: The Royal Tenenbaums

Wes Anderson’s films have the visual air of a Scooby Doo episode and a children’s activity book rolled into one, and yet to dismiss the films for their stylistic cuteness is to miss the point. At the center of that cartoonish ball, Anderson always provides some very dark, very adult themes to explore. You just have to take the time to find them. Then again, it’s either underlining Anderson’s unique genius or exposing the shallowness of his storytelling to note that his films’ sets and costumes often do more to reveal his characters than those staples we know and love called dialogue and acting. In none of Anderson’s films is that dynamic in better display than in The Royal Tenenbaums, and thus this narrow analysis of that movie makes for my submission to the Production Design Blog-a-thon wrapping up over at Too Many Projects Film Club.

What is the value of a production designer (responsible for a film’s visual aesthetic, from sets to props and sometimes costumes, too)? It depends on the film. But on an Anderson set, the production designer is arguably of greater significance than the actors, because for better or worse the director’s visual compositions are often more indelible than the stories underneath. To think of The Darjeeling Limited is to recall the titular blue train and Owen Wilson’s bandaged face. The Life Aquatic With Steve Zissou brings to mind Bill Murray in the Jacques Cousteau-esque orange knit cap and the bright blue wetsuit. And just before that in the Anderson collection is The Royal Tenenbaums, a film literally separated into chapters that fulfills its children’s book motif with costumes fit for paper dolls and sets that seem inspired by pop-up books.

The production designer for The Royal Tenenbaums was David Wasco – who also worked with Anderson on Bottle Rocket and who paired with Quentin Tarantino on Reservoir Dogs, Pulp Fiction and the Kill Bill flicks – but the source of inspiration was clearly Anderson. Clearly, because Anderson’s films have some consistent visual themes despite working with multiple production designers. Clearly, because the Criterion DVD release includes a fantastic color foldout of detailed diagrams that outlines how the Tenenbaums tableau came together.

The drawings (samples below) are by Anderson’s brother, Eric, and the filmmaker explains their genesis in the pamphlet: “When I’m writing, I keep notebooks of ideas for sets, props, and clothes. I incorporate some of these ideas into the script, but I set the majority of them aside to give privately to the different department heads during preproduction. In the past, I have occasionally forgotten some of my favorite ideas until it was too late … To prevent this from happening on The Royal Tenenbaums (which contains more perhaps unnecessary visual detail than both of my previous films combined), about three months before we started shooting, I asked my brother, Eric, a skilled illustrator, to help me create a set of drawings that would include much of the information I wanted to communicate to the crew – and that would also suggest the overall look and feeling of the movie.”

The experiment was a tremendous success. To view the color sketches – many of which Anderson says weren’t entirely finished until after the sets were built and furnished – is to appreciate the director’s imagination and auteur influence as well as Wasco’s ability to turn dream into reality – an accomplishment that shouldn’t be diminished by Anderson’s detailed demands. With the exception of the exterior of the brick building at Archer Avenue, the Tenenbaum house is pure fantasy, the temporary stuff of movie magic, and yet for all its intentional quirkiness it feels lived-in to a degree that many sets don’t.

Anderson is derided by his detractors for being a gimmicky filmmaker who is more style than substance, but those detractors often overlook the significance of style as a storytelling device. Tenenbaums places so much emphasis on the physical spaces inhabited by the characters that the film begins with a labeled tour of the Tenenbaum house in order that we might understand its occupants. Does this cheapen the narrative or expose a weakness in Anderson’s ability to write old-fashioned character exposition? Only if you think that the medium is never the message.

For me, Anderson’s bric-a-brac obsession in Tenenbaums brings to mind a moment in High Fidelity when John Cusack’s Rob opines, “Books, records, music – these things matter. Call me shallow, but it’s the damn truth.” That couldn’t be more correct. Sure, we tell one another that it’s what’s inside that counts, yet at the same time almost all of us go around using our exteriors as billboards to advertise our desired (not always genuine or accurate) inner selves. Sometimes our attire or home furnishings aren’t evidence of who we are so much as they are symbols of who we want to be, which is equally significant, because one folds into the other.

In the passage quoted above, Anderson freely admits that some of this is “unnecessary visual detail,” and that’s true, too. In that respect, Anderson is just having fun. But the attention to life’s accouterments in Tenenbaums (and other Anderson films) is far from a frivolous pursuit. Often these visual cues are the first steps to knowing someone – sometimes better than they know themselves.

The Diagrams
Click any of the following to enlarge: 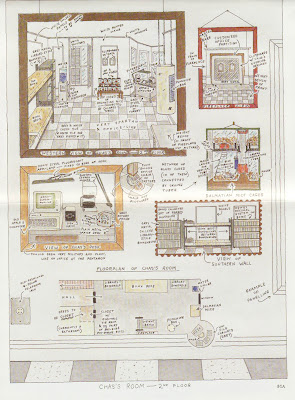 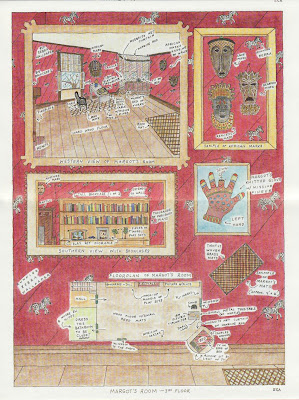 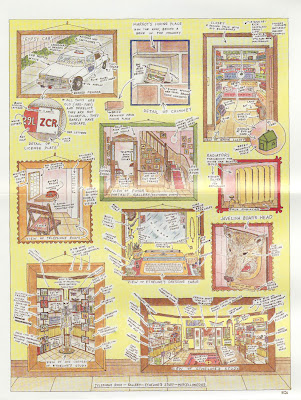 Dreams Made Into Reality
Click any of the following to enlarge:

(My favorite "set" in the film: the game closet!)
Posted by Jason Bellamy at 9:58 AM

This one took me down the rabbit hole.

The quote from High Fidelity reminded me of a passage I read last night in "The Blind Side," which mentioned the Marxist theory of "False consciousness" and sent me to Wikipedia for an explanation. I can't say I fully understand it, but I took from it that certain classes can learn (or be forced) to misstate the value of goods as a means of subconsciously justifying their own roles in society. Basically, learning to love the stuff you have because it's all you'll ever be able to afford.

As it applies to High Fidelity: owning a lot of records isn't cool, but Rob convinces himself it is since he'll never be a rich powerbroker, or whatever. (In the case of "The Blind Side," it applied to football coaches in the pre-free agency period who had convinced themselves -- wrongly -- that good left tackles weren't worth a ton of money, which was shot all to hell when the market was allowed to take over and assign proper value to them.)

In the case of Anderson, is his use of production design a similar way of convincing an audience to appreciate one thing to mask his limitations in other areas? Maybe. But then that got me thinking about The Matrix, and how sometimes even though you know the steak isn't real, your brain thinks it tastes good and so you eat it regardless.

I think that's how I enjoy Anderson movies. They're goofy, and something in the back of my head tells me they might not be worth a damn, but they're fun to look at, so I stick with them, and gain some affection for the characters in the process.

I love that game closet!

It has the same versions of Clue, Sorry, Scrabble and Operation we had as kids (though it strangely has duplicates of Operation, Scrabble and Payday).

I had thought about doing RT for one of my posts as well, but didn't think I could do that Brownstone justice. I'm glad you chose it Jason.

Rob, you make some interesting points regarding "false consciousness", but that sounds like a theory that should probably be applied sparingly. Anderson's films are indeed goofy, but I see that as adding to the story and characters already present - not masking any inadequacies.

But then again, I think owning a lot of records is actually cool, so...

Great post, this is exactly why I look forward to Anderson's films more than any other director.

I posted something related to this last year, listing all the "static" jokes in the small details of the movie:

West Anderson: It's in the details