A Filmmaker Drowning: Lady In The Water 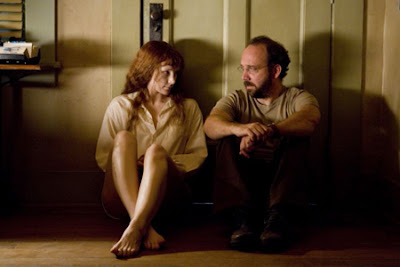 [Just a few days away from M Night Shyamalan’s The Happening, The Cooler offers a review of the filmmaker’s previous effort, written upon the film’s release in the author’s pre-blog era.]

A day after it had opened nationwide, and with more than an hour of the 110-minute movie remaining, the entire audience watching Lady In The Water at a well-attended Saturday afternoon showing in Washington, D.C., got up and walked out of the theater in unison, me among them. We were, I think it’s safe to say, disgusted. Some of us, I guess, because a pleasurable movie-going experience had been interrupted by a fire alarm that forced the evacuation of the entire multiplex. But most of us – at least me – because a second trip to the cinema would be required to finish a film that’s hardly worth watching in the first place.

The fifth original creation from writer/director M Night Shyamalan, Lady In The Water is an utter disaster, a truly awful film by any standards, but especially by his. It is a movie without grace, intrigue or common sense. It is poorly realized and shoddily written. Shocking me like he never has before, the imaginative Shyamalan, who since 1999’s watershed The Sixth Sense has dazzled audiences with intricate surprise endings, has managed to make a movie so muddled that it feels unplanned, as if the director made it up as he went along.

That might not be far from the truth. According to reports, Lady In The Water is inspired by a bedtime story that Shyamalan created for his daughters. It tells the tale of Cleveland Heep (Paul Giamatti), who as the manager of an apartment complex called The Cove discovers a sea nymph living in the swimming pool. Her name is Story (Bryce Dallas Howard), and her ashen skin and matted golden locks make her look like the missing link between Daryl Hannah’s mermaid in Splash and Samara from The Ring. She is naked, as sea nymphs tend to be, but dons one of Cleveland’s “beautiful” button-up shirts after dragging the stuttering building manager back to his poolside bungalow when a fall renders him unconscious.

Needless to say, we don’t actually see the dragging episode. This is a PG-13 film; besides, the sight of an unclothed Howard struggling to tow a portly Giamatti across a pool deck would certainly fit the Seinfeldian definition of “bad naked.” Still, in Lady In The Water we see too much. Chiefly, we witness a filmmaker running out of ideas. As Cleveland looks to solve the mystery that is Story, Shyamalan seems to be scrambling for answers. He decides to hide them in an old Asian woman who grew up hearing a bedtime story about sea nymphs, which in this case are called narfs. It’s key that the old woman is apparently the only non-English speaker at The Cove, because the language barrier forces Cleveland to spend the whole movie learning what I’m about to tell you in a few sentences.

Story, like all narfs, is from the Blue World. She has risen from the depths to make contact with a specific someone who will get a “pins and needles” feeling inspiring him to change the course of his life and, with it, that of humankind. But Story has a limited window to do this. She’s being hunted by a wolf-like creature with grassy fur and red eyes called a scrunt, and she’s not getting much help from the peacekeeping monkey-like creatures called tartutics. To get back to the Blue World, Story has to be safely away from the scrunt so that she can be picked up by a giant eagle-like creature called an, um, eagle. She also has to be mostly alone, but she can be assisted by human guardians empowered to help her.

Of course, the humans meant to assist Story don’t know that they’re so empowered, and Story doesn’t know who they are. Or, if she does, strict Blue World rules don’t allow her to say so, which is odd considering Story’s penchant for telling people their futures. Get someone alone, and Story is like a drunken palm-reader. Or maybe drugged is a better word. Sedated. Howard plays Story with the same empty stare she used as the blind Ivy Walker in Shyamalan’s previous movie, The Village, only without the enrapturing verve. Story is so lacking in personality that she’s virtually comatose. She speaks in monotone as if possessed. And if she’d had the misfortune of popping up in a Georgetown pool, folks wouldn’t be looking for a giant eagle, they’d be gathering for an exorcism.

Which might not be a bad idea for Shyamalan, because this film makes you wonder what’s happened to him. Like his surprise endings or not, Shyamalan has always been positively Spielbergian in his ability to blend reality and make-believe. Yet somehow the film in which he dives deepest into fantasy is the one most deficient of magic. Lady In The Water deals in Shyamalan’s usual themes of fate and the extraordinary abilities of ordinary people, but the thrill is gone. Nowhere is there a scene even approaching the wondrousness of the weight-lifting sequence from Unbreakable, for example, where Bruce Willis’ David Dunn so memorably tests his limits.

Beyond Giamatti’s brave and impassioned performance amidst a doomed voyage, there’s nothing memorable here. But there’s plenty to forget. Like the way Cleveland is forced to go about his investigation into Story entirely illogically to serve Shyamalan’s tenuous plot exposition. With the cranky Asian woman, Cleveland is initially all too pleased to let translation inconveniences keep him from interrogating The Cove’s only resident narf expert. Meanwhile, with Story, Cleveland makes inquiries that would be totally inane if they weren’t completely divine, like following up Story’s revelation that she’s there to meet a writer by asking, “Is he writing something important?” Or returning from Story’s underwater lair and wondering if the cracks in the walls are there by design, to allow the room to collapse.

In that last case, Shyamalan is on damage control, hoping to repair loopholes that naysayers will all too eagerly try to identify. No film deserves such scrutiny, but it’s sad to see that Shyamalan has lost his nerve. Fantasies needn’t bend to earthly laws. They must only remain faithful to their own rules. Lady In The Water spends its entirety trying to draft its constitution and establish its boundaries, but the world created here is constantly under construction. Built on a foundation of mud, it isn’t Story’s lair that collapses on itself, it’s Shyamalan’s film.
Posted by Jason Bellamy at 9:15 PM

Now that the disastrous "The Happening" has been released - this might be a moment in film history: "Lady in the Water" is no longer Shyamalan's worst film! I may have to give "Lady" another viewing. It may seem good in comparison.