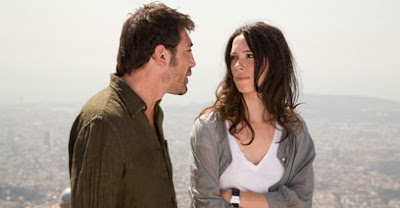 Vicky Cristina Barcelona, Woody Allen’s latest film, is a pig in lipstick. It’s still a pig, as the saying goes, which is to say it’s very much a Woody Allen movie, accented with the flourishes we have come to expect from the director through four decades of indefatigable output. The familiar font of the opening credits, the storybook narration, the use of dialogue that’s both meticulously drawn and awkwardly improvised, plus the storyline that’s full of love, self-absorption and self-doubt – it’s all here. But these aren’t the things that draw our attention, because it turns out that a pig in lipstick isn’t just a pig after all. It’s a spectacle. And so it is that Vicky Cristina Barcelona is notable for all the ways it isn’t your typical Allen fare.

The differences begin, most obviously, with the setting: Barcelona and its reds, yellows and stucco in lieu of Manhattan and its gray and more gray and steel. VCB is a travelogue disguised as a meditation on love. The cinematographer is Javier Aguirresarobe, who goes down as one of the few individuals to ever leave a deeper mark on an Allen film than Allen himself. In this movie, the subplots come and go, but what remains is our sense of place. VCB is about a pair of young American women who set out to share one of those unforgettable summers overseas, and so Aguirresarobe devours Spain as if he wants their journey to be ours. He captures art and architecture, musicians and museums. And yet the most stunning treasures to come before Aguirresarobe’s camera are Javier Bardem and Penelope Cruz, who flap into an Allen film like a pair of exotic parrots who don’t know that the director usually works with parakeets.

Cruz plays an erratic dabbling artist named Maria Elena, the hot-tempered ex of Javier Bardem’s Juan Antonio, a successful painter. Of all the key players, Maria Elena is the last to arrive, but she makes an instantly indelible impression. Rumored to have attempted killing Juan Antonio in a jealous rage, Maria Elena is a concept before she is a flesh-and-blood character, and Cruz makes sure she lives up to her reputation (the Harry Lime trick, on a considerably lesser scale). Maria Elena is fragile, angry, passionate, sexy and conniving, all at once, and she convincingly drifts from Spanish to English and back again, much to Juan Antonio’s frustration, as her temper infiltrates any hint of demureness like waves crawling up the shore. Allen’s screenplay never allows us to have a private moment with Maria Elena, but her sheer force demands (and receives) a share of the spotlight.

Comparatively, Bardem’s Juan Antonio is forgettable, though his introduction is anything but: At a Barcelona restaurant, Juan Antonio approaches the table of Vicky (Rebecca Hall) and Cristina (Scarlett Johansson) and – without even sitting down – offers an invitation to join him on a trip to Oviedo for sightseeing and lovemaking. The invitation isn’t meant for one of them specifically, or for either of them. It’s for both of them. Cristina, a lamb to the bad-boy wolf if there ever was one, is intrigued. Vicky, in love with her polished, polite and wealthy husband-to-be back home in New York, is insulted. Thus, while Cristina looks on in hormonal paralysis, Vicky and Juan Antonio debate the nature of his bold invitation. And as quickly as it becomes clear that Juan Antonio doesn’t see anything bold about it, we know all about his character that we need to.

From this, a love trapezoid will spawn, leaving Juan Antonio to be a straight man overshadowed by the theatrics of the spirited women around him. That said: Vicky doesn’t acquiesce to his request for a threesome, which is a shame. Because while the only thing Juan Antonio has in common with Anton Chigurh is unflinching confidence, I was aching for a moment in which Vicky and Cristina would argue over the rights to Juan Antonio, forcing him to settle the debate by throwing a coin in the air and having them call it. No such luck, although Allen makes up for the omission with an enjoyable mutual seduction between Juan Antonio and Cristina that turns hilarious just when the characters are ready to get down to serious business.

Surprisingly, that gag is a rarity in a film that’s determined to be taken seriously. You might have noticed that Allen’s name was absent from VCB’s trailers, as if trying to avoid audience preconceptions. Equally unusual then is Allen’s decision not to act as narrator, passing on the duties to Christopher Evan Welch, even though the commentary is so intrinsically Woodman that we hear his nasally voice just the same. Welch’s pale drone is so uninspired that, given the frequency with which he states the obvious, it’s tempting to think that the film could do without him. Yet the sad truth is that minus the narrator’s omniscience, several of these characters would be empty shells. (Not to mention that the narrator keeps the train moving forward through several moments when sudden time lapses or character mood swings might otherwise derail it.)

The least developed character, save Patricia Clarkson’s Judy, who is so inconsequential she should be cut entirely, is Johansson’s Cristina. This in spite of the fact that Cristina might be the easiest character to find in real life: a young woman hung up on the idea that love is so profound that it defies description, convention and perhaps even understanding. She’s an emotional drifter, forever determined to become the kind of elusive but deep soul that she romanticizes. In Johansson’s winsome gazes, this much is obvious, and yet not obvious. In a few instances it isn’t clear if Cristina is lying to herself, or if Allen merely has the character bending to his dramatic arc’s every whim. If not for the narration instructing us on Cristina’s emotions, she’d seem schizophrenic.

In fairness to Johansson, who does little more than look the part, a mediocre Allen screenplay gives her little to work with. On the other hand, Hall’s character is equally incomplete. And yet by the end of the film Vicky’s emotions are the only ones that resonate, even though she begins the picture as nothing more than a caricature of female rigidness. Hall’s performance is the next best thing to watch in this film, behind only the spicy chemistry of Cruz and Bardem. And, well, behind the Barcelona setting, too. Underneath it all, VCB provides us with the same erotic and neurotic la-la land that Allen films have inhabited time and time again over the years. All too often in recent decades it’s made for an uninteresting stop. This time, the façade that is Barcelona makes tired-old at least feel tired-new. A little lipstick, it turns out, can go a long way.
Posted by Jason Bellamy at 11:18 PM

Thanks for that review. I was on the fence about this movie and it was interesting to here your point of view.

Is it weird that whenever I think about seeing something or watch something, I always think: I wonder what Jason would say because I know I'm missing a lot."?

Speaking of, we just watched The Shining on DVR. I would love you to asses that movie sometime. A throwback, perhaps.

"The Shining" would be a good one to revisit sometime. It's been a while and I don't have strong feelings about it, which feels wrong.

I'll add it to the rainy day list. The good news is that after a busy summer of not much blogging, I have some fun things planned for the next month or so, I think. We'll see how it goes...

I'm looking forward to your review of Debbie Does Dallas!

Nice review. I really loved this film, and in fact I think it's one of Woody's best (and if you read my blog you know I'm quite a fan of him in general). I disagree about the narration -- it does not, to me, sound like Woody, and I can't imagine him reading it without drastically altering the effect of the voiceover within the film. Welch's dry, uninflected tone is what gives the narration its wry, overtly literary distance from the characters. If Woody read it, the comedic tone would be too obvious and the film would feel a lot more like a typical Woody picture, which it's really not in many ways. The narration comments obliquely on the flighty, superficial outlook of the two main girls, who tend to treat their every experience with a shallow tourist mentality.

Ed: Thanks for the comment. I’m with you on the narration to a point. Welch’s tone does give it literary distance. And I suppose I did get used to it.

But when the film’s opening titles unfold in Woody Font (whatever font that is), and when the opening tune is so Woodman, well, I did have Allen’s voice in my head as Welch opened the narration. It was as if Allen had a head cold. And, sure, most of Allen’s narrations have a humoristic undertone (or overtone, for that matter), but I think he could have read it straight.

For reasons I can’t quite explain, I’ve read many reviews that call “VCB” “hilarious.” Hilarious? Really? I can only go so far as cute, and I never thought “VCB” was striving for comedic effect. (I think many critics have a knee-jerk reaction to an Woodman film – it MUST be funny.) But if it does indeed strive for comedy, then why not have Allen give the reading?

Here's a question for Ed, or anyone: What's your favorite Allen film of the past ... let's say 12 years or so? So post-"Mighty Aphrodite."

I think parts of the film are hilarious -- many moments with Cruz, and a few clever one-liners like Scarlet's "you better undress me before this turns into a panel discussion" -- but you're right that calling the film as a whole hilarious is certainly overdoing it. It strives more for a quietly amusing tone, or even a light dramatic tone, most of the time.

I don't know if you've seen, but at my site I'm currently going chronologically through Woody's films, and the last one I watched was Everyone Says I Love You. So I still haven't seen the films lying between that and Match Point at this point. I'll be surprised if anything in that stretch tops Vicky Cristina for me, though.