Queue It Up: The Descent 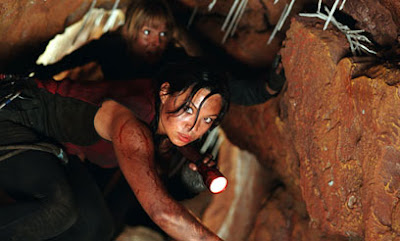 [Queue It Up is supposed to be for mostly overlooked films. I’m not sure this one classifies. And then again it does, because I nearly overlooked it myself. The blood-and-guts genre just ain’t my tub of popcorn. That said, horror fans are likely to tell me that this movie isn’t horror at all, and maybe that’s the point. Perhaps this is a bridge film. In any case, it went down as one of my top five films of 2006. In celebration of Halloween, The Cooler offers the following review, written upon the film’s release in the author’s pre-blog era.]

When you grow up on the West Coast like I did, you tend to view the 2,000-plus-mile Appalachian Range as a parade of cute, wee bluffs. Out toward the Pacific, we have the mighty Rocky Mountains, not to mention the slighter yet striking Cascade and Sierra Nevada ranges. By comparison, the Appalachians aren’t just underwhelming, they’re, well, a bit sissy – the one series of undulations in a landscape so otherwise flat that without them someone standing on the hood of their car in New York could see all the way to Kansas.

That’s why I couldn’t help but elicit a tiny, politically-incorrect chuckle as I realized that The Descent’s all-girl fright-fest would unfold within the belly of America’s weak little sister of a mountain range; all too appropriate, I thought, for a movie void of men. But the joke, it turns out, was on me. Stuffed with action and bathed in blood, The Descent may be full of sisters, but it’s neither weak nor little. Instead it’s gory and ghastly and second to none. It’s also so packed with girl power that it made me think I might need an intravenous drip of estrogen just to survive it.

Lest I be misunderstood, I mean that as a compliment. The Descent tells the story of six female friends who gather together on the one-year anniversary of a tragedy to bond on a spelunking expedition in a remote part of Appalachia (so remote that it has a nearby cabin and a clearly well-used road, but never mind). They are led by the gung-ho Juno (Natalie Mendoza), who believes in safety but not maps, and Rebecca (Saskia Mulder), an expert climber who does everything by the book. The rest of the girls aren’t quite so practiced, but they’re hardly novices. They strap into their harnesses and attach their descenders without effort, and none of them even thinks to complain about what a helmet will do to their hair.

Seasoned adventures, they take the plunge with gusto. Yet as soon as the girls rope down into the massive cave system, there’s a sense that their expedition won’t go as planned. Maybe because Sarah (Shauna Macdonald) is still haunted by the deaths of her husband and young daughter and hears voices. Maybe because a flashlight reveals red scratches on the cave walls that make it appear as if someone before them tried to claw their way out. Maybe because there’s an obligatory surge of bats that startles the girls (and us) before exiting the cave in an embarrassingly pathetic CGI shot that takes special effects backward about 15 years. Maybe.

But for sure we know something will go wrong because of the way the movie begins, with Sarah’s husband dying in a car crash when a metal rod perforates his skull, sending blood and brain matter oozing out the back of the headrest. A scene like that is a promise. It says, “Get ready, folks, this movie is gonna get messy!” And it will. But not right away. Writer/director Neil Marshall believes in foreplay, and so for I-won’t-tell-you-how-long he just sets the mood of impending doom. The girls go deeper and deeper into the cave, and the claustrophobia and suspense increase in time. Whenever one of the girls turns a corner or reaches out into the darkness we wonder, “Is this it? Is this when it arrives?”

Which of course brings us to the question that the not-so-legendary band Faith No More asked so epically (and repetitively) in 1990: “What is it?” Skip the rest of this paragraph if you don’t want to know, but after a few near encounters the girls eventually come face-to-revolting-face with predatory creatures that climb the subterranean walls like spiders. Hairless and pasty in complexion, these mostly-humanesque dwellers of the dark look like the byproduct of Lord Of The Rings’ Gollum mating with Harry Potter’s Voldemort. Only less sexy.

Yet grotesque as they are, my first reaction upon getting a good peek at one of the creatures is that they aren’t much to look at. Not when you compare them to those classic creepy-crawlies from the Alien movies, which are all spine and tail and skull and teeth. Now those creatures leave an impression! But the demons of The Descent are memorable in their own right, not so much for their appearance but their implementation. Breaking away from the usually-accurate convention that says horror film thrills come from the anticipation of an encounter rather than the realization of one, Marshall lays all his cards on the table and says, “Let’s get it on.”

Once the monsters are revealed, the final act is non-stop action, a babalicious butt-kicking brouhaha. And this time it’s the encounters that thrill. Marshall is so confident in his girl-ghoul showdowns that sometimes he even warns us when the creatures are approaching. And still the movie terrifies! The Descent’s format succeeds because there’s something undeniably exciting about watching athletically-sexy girls kick ass. In the past, the horror genre has always been fond of female characters because – as extraordinary screamers who tend to undo their bras just before evil descends upon them – they make good prey. But that’s another rule that’s reversed in The Descent.

These chicks are fighters. They use their bare hands, rocks, pieces of bone and a few moves they might have picked up in self-defense classes. Were I not so busy covering my eyes at the punishment they inflict, I would have applauded regularly. Their tenacity is so inspirationally thrilling that at one point – maybe when Juno plunges her ice axe into the skull of one of the creatures – I actually thought, ‘If I had a daughter, I’d hope she’d grow up to be like one of these girls.’ No kidding!

But The Descent will hardly warm everyone’s cockles. In fact, I’m surprised it warmed mine. Given the nausea it creates, I wouldn’t recommend seeing it before eating, or after eating, or really at all. On principle, I have a hard time advocating a film in which one of the characters emulates Martin Sheen in Apocalypse Now with a slow, steady rise out of a pool of blood. But that’s the nature of The Descent and there’s no way around it: one way in, one way out, lots of blood, sweat and cheers in between. Pretty much in that order. I couldn’t always watch, but I never closed my eyes. Well, almost never.

[“Queue It Up” is a series of sporadic recommendations of often overlooked movies for your Netflix queue.]
Posted by Jason Bellamy at 2:37 PM

Email ThisBlogThis!Share to TwitterShare to FacebookShare to Pinterest
Labels: Queue It Up

Great Halloween pick. I totally forgot that I watched this movie last year with my old roommate (a walking encyclopedia of all things horror related).

The creatures in "The Descent" are presented really well, like you said, and I the use of the sudden glimpses via helmet lamp were very, very effective. My only real complaint was that Marshall waited just a few minutes too long to dive into the horror scenes. I'm all for Hitchcockian build-up, but aesthetically, if he had shaved five minutes off the middle cabin scenes, this would be a perfect horror movie. Not the best, but perfect in the sense of just wanting some scares.

"It's just a poxy cave." Yeah, right. It may take five minutes too long to get to the creatures and gore (I could have spent less time female bonding in the cabin), but once the camcorder screen reveals the first "thing" the action and suspense never let go. This is a masterful film!