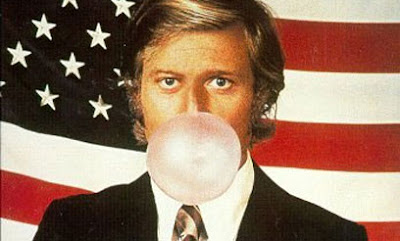 The Politics & Movies Blog-a-thon has concluded with 23 posts, one of which is the gateway to 25 more. I'm pleased.

If you haven't yet, I encourage you to settle in and do some reading. There's more here than you can get to in one sitting. I'd like to thank all those who contributed posts, as well as those who were active in leaving comments. Quite literally, the blog-a-thon would be nothing without you.

Enjoy the spoils after the jump ...

"Eat Your Vegetables" - Gee Bobg
I don’t know how my mom ever got me to watch the film 1776 in the first place ... Ever since she did, I have spent a large part of my life trying — and failing, mostly — to persuade others to see it too. But the movie is almost impossible to describe without making it sound like “eat your vegetables” or “floss your teeth” or “do your homework” — something boring but essential because it’s good for you (shudder), even though it’s actually as entertaining a two hours as you’re ever likely to spend.

"The Road To Guantanamo (2006)" - The Cooler
But the story of Ruhal Ahmed, Asif Iqbal and Shafiq Rasul, often called the Tipton Three in reference to the area of England from which they hailed, is eye-opening. And upon hearing their tale in this measured and unsettling film, the luxury of ignorance is lost.

"Five Films for Mr. President" - Octopus Cinema
Five recommended films for the current (but not for long) president, Mr. George W. Bush. And no, W. isn't one of them.

"A View to a Kill: Remembering JFK" - The Cooler
A rerun of one of this blog's initial posts that's too appropriate for this blog-a-thon to ignore: And on this Presidents’ Day weekend the film is worth remembering if for no other reason than its rare effect: in reflecting history, JFK writes it, too.

"Election Overlook" – The Dancing Image
Holy cow! It’s a one-man politics and movies blog-a-thon! Twenty-five posts covering movies past (Mr. Smith Goes to Washington) and present (W.), fictional (The Contender) and factual (Taxi to the Dark Side), plus stuff in between (Fahrenheit 9/11). Check it out!

"Meantime (1984)" - Only The Cinema
If Naked is a fully realized artistic statement on poverty, homelessness, and depression, then Meantime is the unmediated reality behind the art, its semi-documentary ugliness spewed up onto the screen like the aftermath of a particularly nasty bender.

"The Neocon Country" - Forward to Yesterday
It’s silly to look for one-to-one allegories to historical events in most movies. It’s even sillier to see direct parallels to recent events in a western made 47 years ago. But, to wax Rumsfeldian, my goodness gracious but it’s hard to ignore the anti-neoconservative stance of The Big Country.

"Political Poster Children" - The Cooler
And though one would suspect that the W. posters would join a long line of provocative or at least evocative political-movie artwork, a quick scan of the library suggests otherwise. Below is a hardly-complete collection of promotional posters for political films.

"W. (2008)" - Bohemian Cinema
Not the extremely-Liberal lashing you were expecting, W. is a film with noble motives and some thoughtful scenarios. Brolin's performance expertly walks the line between acting and impersonating as he and director Oliver Stone attempt to bring the last eight years to a close.

"The Best Recent Political Documentaries" - The Moviezzz Blog
When I first saw (The War Room), I have to admit I wasn’t its biggest fan. I thought maybe that was because, since I was a Paul Tsongas supporter in 1992, I kept hoping for a different outcome.

"The Day After: One Blogger's Opinion" - The Cooler
Warning: In the following, the author of this blog shares his political views. This post has nothing to do with cinema. Well, almost nothing ...

"The Great McGinty, Magnificent Sulzer" - Octopus Cinema
The Great McGinty has achieved a type of peculiar transcendence, especially in the current tempestuous political climate. With all the recent talk about vote blocking, mistakenly lost votes and intentionally mistaken tallies, there is a particular relevance in the film's first act in which McGinty earns his keep by voting a total of 37 times.

"Rockying the Free World" - Chicago Ex-Patriate
The training sequences then turn into a sort of political mindfuck. In order to clear his head and focus on the fight, Rocky insists on living and training in the barren countryside with no luxuries, while Drago has the best science and technology as his disposal. In other words, Rocky, the great American hero, becomes a representation of Communism.

"Society of the Spectacle (1973)" - Only The Cinema
His film was radical and surprising when it was made, in 1973, and it remains today an eye-opening examination of global power, control, and oppression.

"Here and Elsewhere (1976)" - Only The Cinema
As with so many of Jean-Luc Godard's films, Here and Elsewhere is an intensely mediated, indirect examination of reality (or, as Godard would probably prefer, realities). It is not so much a political film as it is about political films, about the ways in which images, sounds, and their combinations can contribute to or impede understanding.

"Idiocracy (2006)" - Tractor Facts
But at the center of Idiocracy, and what I like to think ties it to Election Day '08, is Luke Wilson's character of Joe. Like Joe "Blow", Joe "Sixpack", or Average "Joe", Wilson's Joe implies a middle-of-the-road, independent, working-class man. But what Mike Judge adds to his "Joe" is a sense of apathy. He's a decent man, but Joe just wants to glide through life without leaving many bruises behind. Unfortunately that entails not leaving any fingerprints either.

"It's an Easy Choice" - He Shot Cyrus
Equal rights for everyone.

"JFK (1991)" - Radiator Heaven
This blurring of reality and fiction by mixing real footage with staged footage makes it difficult to discern what really happened and what is merely speculation. Stone does this in order to create what he calls "a countermyth to the myth of the Warren Commission because a lot of the original facts were lost in a very shoddy investigation" and simulate the confusing quagmire of events as they are depicted in The Warren Commission Report.

"My Fellow Americans: Reaching Across the Aisle" - Strange Culture
If there's one lesson to pull away from this film is that the only time republicans and democrats seem to effectively work together it is when they are forced to.

"Nixon: A Ghost Story" – The Cooler
For historical truth, we have encyclopedias. For emotional truth, we have art. Upon examining its moments of haunting, Nixon turns out to be less a political film than a ghost story.

"Secret Ballot (2001)" - Ferdy on Films
Having your eyes on the stars and your feet on the ground is always the prudent thing to do, especially in a representative democracy, and especially in one as large and diverse as the United States. An object lesson in the wisdom of this advice can be found in Secret Ballot, a film that premiered just a year after the Election Dysfunction of 2000 that shows us the beauty and limitations of democracy in a gently satiric way.

The following links aren’t official submissions to the blog-a-thon, but they’re in the same thematic ballpark. To get everybody warmed up, I’d like to point readers toward the excellent video essays of Kevin B Lee and Matt Zoller Seitz, published a few weeks ago at Moving Image Source:

I've had a lot of fun reading and writing these. Some excellent stuff!

I've done my best to comment on everyone's posting, with a few exceptions that I hope to rectify by Monday night.

But following Joshua's lead, I also want to say that this has easily been one of the best blog-a-thons I've seen. That goes for the quality of the submissions and the excellent ideas/critiques floating around the comment pages.

** Shutting down comments on this post, due to annoying spam. **