Pungent: Perfume: The Story Of A Murderer 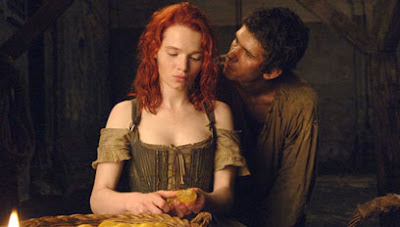 [Following up the review of The International, The Cooler offers the following review, written upon the film’s release in the author’s pre-blog era.]

Near the beginning of Tom Tykwer’s Perfume: The Story Of A Murderer, there’s a sequence of images so repulsive that you’ll have to beware your gag reflex. Fish heads, entrails, blood, maggots and filth – all delivered to us rapid-fire – make up the environment that sees the birth of Jean-Baptiste Grenouille. The location is Paris. The time is somewhere in the 18th Century. And the collective visual assault on the senses is so overwhelming that it might inspire you to cover your mouth and plug your nose. Which of course is precisely the point.

Based on a 1980 novel by Patrick Suskind, Perfume is a mesmerizing thriller about a man’s dark romance with his superhuman sense of smell. Jean-Baptiste, played in adulthood by Ben Whishaw, can detect the scent of a woman from around a corner. He can even pick up the aroma of glass. And were he to go wine tasting with Sideways’ Miles Raymond, Jean-Baptiste would be able to distinguish not just the scent of a nutty Edam cheese but the stench of the hand that had plucked the grapes.

Jean-Baptiste’s skill is a blessing and a curse, both to the man and to the movie about him. For Jean-Baptiste, his unparalleled talent takes him out of the slums and to the nape of the upper crust, but it also leads him on a murderous rampage. For Perfume, Jean-Baptiste’s immense olfactory ability provides the elements for one of the most unique characters in cinema history, while rendering him a challenge to portray cinematically. After all, how does a filmmaker let an audience identify with a character who identifies with the world around him solely through smell?

If the filmmaker is Tykwer, he does so by ramping up the visuals and targeting images we associate with odors: a fish market, a mound of flowers and a woman’s sweet scented hair. After enough of these are processed, we begin to smell the world through Jean-Baptiste’s nose as if the theater were equipped with AromaRama or Smell-O-Vision, the two disastrous late-1950s experiments in cinema “scent-tracking.” And what a world it is! Jean-Baptiste’s unquenchable urge to bottle beauty leads him to murder women so he can capture their scent: basting their naked bodies in animal fat, wrapping them up to marinate and then extracting their oils from the fat.

It’s a gruesome process, but Jean-Baptiste carries out his task without pause, and that’s part of what makes this 147-minute movie – at least 20 minutes too long – so intoxicating. Like Hannibal Lecter, Jean-Baptiste is an artist of evil. We are drawn to him and repulsed by his actions in equal measure. As the young beauties of Grasse begin to die almost one a night, we fear for those like the virginal Laura (Rachel Hurd-Wood) and yet we never quite reach the point where we want Jean-Baptiste stopped – not before he completes his masterpiece. With John Hurt providing a charming storybook narration to go with Frank Griebe’s succulent cinematography, Perfume inhales us. It’s a movie that goes to the depths of putrid evil and comes up smelling like roses.
Posted by Jason Bellamy at 10:00 PM