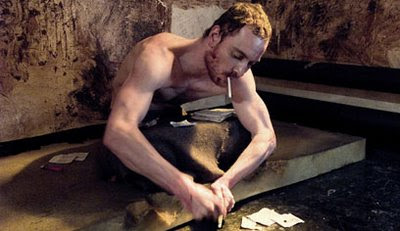 Robert De Niro went one way in Raging Bull. Matt Damon went the other way in Courage Under Fire. Tom Hanks went both ways in Cast Away. For decades now, actors have been fattening up or thinning down for movie roles. For every Renee Zellweger (Bridget Jones’s Diary), there’s a Christian Bale (The Machinist). For every George Clooney (Syriana), there’s Jeremy Davies (Rescue Dawn).

That’s why I wasn’t shocked by the conclusion of Steve McQueen’s Hunger, which includes ghastly images of a sickly looking Michael Fassbender as Bobby Sands, the IRA activist who died of starvation in 1981 after 66 days on hunger strike. Still, I was troubled by the almost sexual ogling of Fassbender’s emaciated frame over the film’s final act, and I remain troubled today.

According to the Los Angeles Times, Fassbender lost 40 pounds for the role by “living on nuts and berries for 10 weeks.” That’s 40 pounds off a guy who didn’t have an ounce to lose in the first place. The result is unsettling, to say the least, though not to McQueen. “That’s the job,” the director told the Times. “The film is called Hunger. It’s not a vanity trip. It’s an essential necessity for the film. The guy (Sands) didn’t eat in order to be heard. It’s work. He’s a professional actor.”

On that last point, we agree: Fassbender is a professional actor. But is starving one’s self to replicate starving “acting,” or is that “doing”? I’d say the latter. True enough, Fassbender’s weight loss was inspired by history; in that respect his starvation wasn’t a “vanity trip,” nor was it some kind of flippant artistic choice, as in Clooney’s rather unnecessary filling-out for Syriana. But was it “an essential necessity”? Mere months after Brad Pitt and Cate Blanchett were aged and de-aged digitally for The Curious Case Of Benjamin Button, I’d say no. Sure, Hunger lacked the budget of David Fincher’s Oscar-luring epic, but McQueen wasn’t without options; good old fashioned makeup effects would have worked, too.

Regardless of the method (or the Method, for that matter), McQueen’s best decision would have been to suggest starvation without actually replicating it. In other words, he should have asked Fassbender to, you know, act. Not only would this have been the more humane choice, I’m not alone in thinking that it would have been more dramatically effective, too. As Peter Rainer of The Christian Science Monitor puts it in his review: “In the end, it is not Bobby Sands but Michael Fassbender we are looking at, and this realization takes us out of the movie.” Indeed, that’s true. The horror I felt at the end of Hunger wasn’t for Sands, who believed he was fighting a life-or-death cause; it was for Fassbender, who was starring in an ultimately trivial movie.

Of course, Fassbender is an adult who can make his own decisions about how he treats his body. On an individual human rights level, I support that. But I’m saddened at the thought of any actor feeling compelled to take such measures in order to land a part. If McQueen views Fassbender’s weight loss as “an essential necessity,” it’s safe to assume that Fassbender wouldn’t have gotten the role without agreeing to fast. At that point, one could argue that Sands had considerably greater control over his decision to starve himslf than Fassbender did. That’s disturbing. What’s even more troubling is the sense that such weight games are becoming somewhat commonplace, despite the primitiveness of the stunt. And, effective or not, that’s what Fassbender’s weight loss is – a stunt.

Speaking of stunts, near the end of Tarsem’s The Fall, there’s a terrific montage of death-defying stunts from the silent film era. Death-defying when they worked, that is; simply deadly when they didn’t. No filmmaker today would ask a stuntman to take the unharnessed risks of those latter day acrobats, so why, with all that we know about human health, digital effects and makeup, are we unnecessarily turning our actors into silent era stuntmen? As Rainer suggests, “filmmakers don’t often give enough credit to the imaginations of their audiences.” Or maybe it’s the filmmakers and actors whose imaginations are limited.
Posted by Jason Bellamy at 9:29 AM

Email ThisBlogThis!Share to TwitterShare to FacebookShare to Pinterest
Labels: Acting, Debate and Controversy

" At that point, one could argue that Sands had considerably greater control over his decision to starve himslf than Fassbender did."

Well, it's not like anyone's forcing him to take this part; I'm sure there's no shortage of other, non-starvation roles available to Fassbender as an actor.

I do agree with your larger point, though, that these kinds of weight loss and gain stunts are silly and distracting. Whenever the realities of film production intrude this forcibly into the movies themselves, it risks putting the audience on a meta plane with respect to the movie, where they're too aware of the way the movie was made rather than the story being told. Of course, it's not always a bad thing to awaken an audience's meta instincts, but I think the films you're talking about here are generally unaware of that effect, and as you point out, it's an effect that actually runs counter to the films' intentions in most of these cases.

I think the same argument applies to real acts of violence involving animals, like the horse's throat being slit in Time of the Wolf or the chickens being killed at the end of Week End or even the various, non-lethal mistreatments of animals scattered throughout some of Werner Herzog's films. These kinds of things inevitably make the audience think about what the filmmakers are doing rather than what the characters are doing. That's why I've always been bothered even by the famous, widely acclaimed hunting sequence from Rules of the Game -- it's supremely ironic, and not in a good way, that Renoir aimed to satirize bourgeois violence by actually duplicating their violence in reality during production.

Well, it's not like anyone's forcing him to take this part; I'm sure there's no shortage of other, non-starvation roles available to Fassbender as an actor.That's a great point. (And I knew I was leaving myself open to it.) But it just seems so exploitive. In many ways it reminds me of the all too many cases when young actresses are pressured to bare all in an effort to establish a foothold. (Not that I mind the result.)

Now, this is a mutually beneficial relationship in many ways. To stick with the Hunger example: "Vanity trip" or not, Fassbender certainly knew he'd get some Hollywood street cred out of starving himself. But, as you said, that's part of the problem: the discussion stops being about the film and starts being about the filmmaking.

I just hate the thought of actors feeling compelled to do themselves bodily harm in order to get the part they want when the effect could be achieved just as well, if not better, another way.

I agree. I think acting and makeup that encourage audience members to use their imaginations go a long way to achieving the desired effect. Alec Guinness probably didn't lose an ounce to act being starved and dehydrated in the hotbox in The Bridge on the River Kwai - but he sure looked, talked, and walked like he was hot and starving. Filmmaking is basically trickery that resembles realism. Losing or gaining 40 pounds is unnecessary and, as you say, it makes the audience too conscious of what the actor suffered and not what the character is suffering.

In other words, he should have asked Fassbender to, you know, act.---

I haven't seen Hunger yet, but the way you describe Fassbender at the end of it sounds painful in the way it was to look at (as you mentioned) Christian Bale in The Machinist.

I always found that body changing of Bale in The Machinist to be sensationalist, and Fassbender's appearance in Hunger sounds kind of around the same lines. Further, could it perhaps be kind of insulting to the real Bobby Sands that McQueen and Fassbender think they are replicating his experience?

I also don't like the tone of McQueen when he says:

“The film is called Hunger. It’s not a vanity trip. It’s an essential necessity for the film. The guy (Sands) didn’t eat in order to be heard. It’s work. He’s a professional actor.”"Essential necessity"??? That's pretty ridiculous if you ask me. Is it essential that an actor fall into an anti-Semitic mindset before portraying Hitler??? And if McQueen just means essential as in physicality, I think you make excellent points about the advancement of makeup and camera tricks.

Fox: I didn’t want to imply that McQueen is some kind of monster by taking his "essential necessity" comment to the extreme, but it could be done:

As for camera tricks, here's what's funny: The first really disturbing shot of Fassbender in his starvation stage focuses on his skeletal elbows, a shot taken from such an angle that we can’t see his shoulders. Thus, my first reaction was one of horror: “Oh, how awful! That can’t be real!” But that was quickly followed by relief: “Oh, it isn’t real. That’s not his arm. It’s a prosthetic. It isn’t actually attached to his body. We can't see his shoulder.” But, it turns out, that was his elbow; there are enough shots later that leave no room for doubt. In fact, they seem designed to erase doubt.

Use makeup. Dress Fassbender in baggy patient garb that makes him look skinnier. Play a magician’s trick, with a fake body on the bed and Fassbender’s actual head poking through, just above the sheets. So many options.

But McQueen didn't want to go that way, and, I guess, neither did Fassbender. And at that point it starts to feel like an effort to wow people with the filmmaking instead of the film.