Spinning on That Dizzy Edge: Adventureland 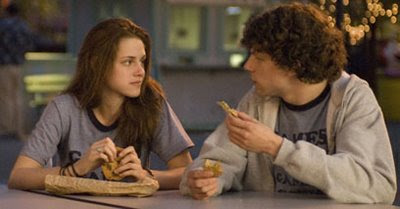 It’s difficult for me to imagine Kristen Stewart bound in a corset and hiding under a powdered wig for a period piece. Likewise, I don’t see her as the heir to Milla Jovovich’s Resident Evil throne. Nor can I picture her as the object of eroticism in a sexual thriller, or as the femme fatale of a noir, or as the girly girl who won’t be complete without her dream wedding. Stewart has decades to prove me wrong, and maybe she will. Or maybe she’ll continue along the path that has served her so well of late. Through last year’s Twilight and now this spring’s Adventureland, Stewart has established herself as the anti-Bond girl, the enchanting yet attainable quasi-beauty next door who unwittingly casts spells on sensitive, well-meaning misfits – guys who are all too easily shaken and stirred.

The misfit in this case is James, a smart, sweet but hardly suave all-around-good-guy played by Jesse Eisenberg who is so reminiscent of Michael Cera’s Evan from Superbad that 15 years from now we’ll struggle to keep them apart. Eisenberg’s character is four years older than Cera’s, but save for the fact that James can buy alcohol the characters are essentially interchangeable. Both are shy, stammering, clever, warm-hearted and completely without game when it comes to the opposite sex. Both are reminiscent of their ages and yet younger than their years, particularly James. (It doesn’t help that Adventureland’s titular amusement park is curiously staffed by college students instead of high schoolers.) And yet amidst trappings that would suggest that Adventureland is a teen movie in disguise, know that it isn’t. Whereas films like Superbad give us characters trying to figure out who they are, Adventureland gives us characters trying to figure out how to be who they are.

It’s a subtle yet significant difference in a subtle yet significant film. Written and directed by Greg Mottola, Adventureland has a modesty and earnestness that matches its 1987 setting, stirring memories of the Brat Pack era when teen movies could be naughty without being obscene. Whereas American Pie’s iconic scenes involve fornication with dessert and musical instruments, Adventureland shows no desire to push the envelope of crassness. The film’s rudest scene involves a goofball urinating on a window at a party; a small and pleasantly goofy moment that lightens Adventureland but hardly defines it. While Superbad succeeds because of all the truly hilarious and hilariously true things that the characters dare to say (“No one has gotten a handjob in cargos since Nam”), Adventureland is defined by things unsaid, by the effective performances of Eisenberg and Stewart as youngsters who find mature relationships even harder to come by than adult relations.

Inarguably, Adventureland is James’ story, but a good number of scenes belong solely to Stewart’s Em. That’s what sets Mottola’s film apart from The Graduate, or Say Anything, or Garden State, or any number of other films in which an aimless and melancholy young man finds rejuvenation through his attraction to a vibrant young woman. Unlike Elaine Robinson, Em is more than just an object of affection. She’s mourning the death of her mother, she’s adjusting to her father’s new wife and she’s struggling to determine whether her sexual affair with an older married man (Ryan Reynolds) is the thing keeping her sane or the thing tearing her apart. Look closely and you’ll note that in fact she’s the Benjamin Braddock of this story, the one going through a quarter-life crisis who never dreams that loving companionship might be part of the answer. James, meanwhile, takes on the role so often assigned to the female of the romantic comedy, allowing his lack of success in love to serve as the prism that colors his self-identity.

Eisenberg’s performance is filled with warmth and charm, but James isn’t much more than a cipher through which we (re-)experience the almost excruciating emotionality of youth. Not that there’s anything wrong with that. Wearing its 1987 setting like a comfortable pair of acid-washed jeans, Adventureland isn’t about a historical time period but an evolutionary one. Bill Hader’s mustache, Kristen Wiig’s navel-high denim and Falco’s “Rock Me Amadeus” all contribute to the film’s effortlessly 80s mise-en-scene while Adventureland saves its nostalgia for the innocence and fragility of early adulthood. Thus the titular amusement park where James and Em meet and (clumsily) fall in love is the perfect location for this story, evoking visceral sensations of childlike joy, sugary sweetness and warm summer nights.

When the fireworks explode over the skyline of the amusement park rides and tents, and James and Em gaze longingly at one another, you’ll likely find yourself remembering a time from your youth when you were scared-shitless in-love or scared-shitless out-of-love. Maybe both. One way or another, Adventureland is guaranteed to make your heart ache. Its true genius is its ability to make early adulthood seem like both the best and worst of times simultaneously. Whether James and Em are right for one another is almost irrelevant. What’s clear after spending time in Adventureland’s world is that everyone needs someone, especially in their early 20s.

Stewart’s ability to make Em vulnerable without turning her into a blubbering target for feminist scorn is what makes her performance so welcoming, not to mention noteworthy. Even the best Hollywood screenplays have a habit of painting their female characters into the victims’ corner, but Stewart refuses to go there. Em’s strength of spirit remains evident even when she’s wracked with insecurity, and while it might seem like a slam dunk for the teenage Stewart to emote angst and nervous energy, keep in mind that in 2002’s Panic Room she did what most child stars from Jodie Foster to Dakota Fanning are wont to do: exhibited maturity beyond her years. With downcast eyes and hair-tugging ticks, Em comes off like someone with some growing up to do while Stewart proves she’s grown up already. It’s a painfully honest performance that defines a piercingly sincere film.
Posted by Jason Bellamy at 2:04 PM

Well said about Stewart's performance - and you capture exactly how I feel about this film. In fact, it's so honest and bittersweet that I find myself not wanting to see it again right away - maybe later with someone who hasn't seen it.

Your assessment of the kinds of films for which Stewart is not suited is very clever. Yet the painful honesty of her performance signifies that her talent is significant.

I'm glad a filmmaker steered away from the teen genre into the 20-something genre. Being a high school teacher, I'm fascinated by the roads chosen by young people after college. As I was watching this film, I thought, "Ah, The Graduate for the new millennium."

Excellent review! I really want to see this film in a big way as I've read nothing but good things about it.

I also really enjoyed Stewart in another understated character study, IN THE LAND OF WOMEN. She quietly steals every scene she's in and one wishes that the film focused more on her than her mom played by Meg Ryan.

Nice analysis. I also wonder if we like the film so much because James is an English major who reads poetry for fun. His friend tries to woo another woman with a copy of Gogol's short stories. Aside from Stewart's talented performance, the film has a reflective literary side designed for critics.