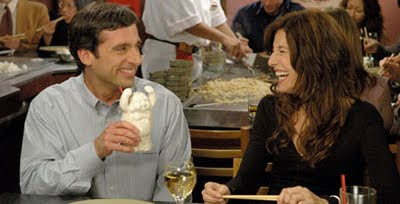 [With Judd Apatow's Funny People hitting theaters, The Cooler offers the following review, written upon the film’s release in the author’s pre-blog era.]

It would seem at first glance that The 40-Year-Old Virgin has too many ties to last year’s exhaustingly foolish Anchorman: The Legend of Ron Burgundy to have any hope of excellence. Steve Carell, who co-starred in Anchorman, assumes the titular role here, having co-written the screenplay with director Judd Apatow, who was an Anchorman producer. Meanwhile, Paul Rudd, Seth Rogen and David Koechner, low-level actors who were either completely unremarkable or entirely annoying as co-stars in Anchorman, manage to resurface in supporting roles, perhaps coming at a discounted bulk rate. All that’s missing then from Anchorman is its star, Will Ferrell. Oh, and one other thing: abject stupidity.

Whereas the humor of Anchorman is so base that only Carell’s weatherman Brick Tamland and his 48 IQ could possibly enjoy it from start to finish, Virgin has some wit about it, and, more significant, some charm. Sure, it’s peppered with the same crassness that seasons all R-rated comedies these days – foul-mouthed old folks, humping animals and bodily-fluid-filled sight gags that are indeed gag-inducing. But amidst this nonsense is a story actually worth caring about, leading to some laughs that you don’t have to regret the next morning. These days, that’s a rare treat.

As the title implies, Virgin is about a man who has never had any day-after regrets. He is Carell’s Andy, a stockroom worker at an electronics store who after going decades without sex has stopped looking for it. Andy leads a quiet, private life collecting toys, painting action figures and playing video games. The biggest event on his social calendar involves watching Survivor with the elderly couple upstairs. Everyone who meets Andy can tell he’s a bit off-center. His neighbors theorize that he needs sex to loosen up, but his coworkers think he’s helpless. One even assumes Andy must be a serial killer. So when the truth comes out about Andy’s sexual inexperience, Andy is bombarded with lady advice from his womanizing (Romany Malco), broken-hearted (Rudd) and pot-smoking (Rogen) coworkers.

You’d think from the title and the setup that the rest of the movie will be about Andy’s quest for sex, but it isn’t. Not entirely. Yes, Andy’s friends give him tips on how to score with women, sometimes to hilarious effect. At one point, Rogen’s Cal tells Andy that women are so self-centered that when hitting on them he should only ask questions. This leads to one of the film’s cleverest scenes wherein Andy is transformed from a sweet nice-guy to an edgy tough-guy (“think David Caruso in Jade”) just by acting as if he’s on Jeopardy! Coming on to a woman at a bookstore (Elizabeth Banks’ perfectly extreme Beth), Andy responds to her comment about the store’s do-it-yourself section by asking, “Do you like to do it yourself?”

But there’s more to The 40-Year-Old Virgin than awkward come-ons and first-time fumblings. Beneath all of that there is a movie about Andy breaking out of his shell and exposing his inner self in order to become close with someone else, not just physically but emotionally. It starts out as a quest for sex and turns into a crusade of the heart. The object of Andy’s interest is Trish (a delightful Catherine Keener), who is outgoing in every way that he is not. Trish runs her own business, has three daughters and is willing to give Andy her phone number when he’s too oblivious to ask for it. Her straight-forwardness and Andy’s awkwardness appear to make them an ill-fitting match, but the thing that Virgin does best is stop short of making Andy an imbecile. The film pokes fun at his sexual inexperience, his toy collection and his naiveté, but it never implies that he isn’t a good and capable person. If anything, Virgin demonizes society at large (as represented by his coworkers) for looking down on him.

Because of the way the film dances through this tricky terrain, Virgin is, on the whole, well-written. Some of its jokes are simple, like when Andy performs a magic trick for Trish’s youngest daughter, only to be mocked for the obvious preparation involved. Others rely on Carell’s gift for understated physical comedy, like when Andy sees a model of a woman’s reproductive region and stares at it with complete foreign curiosity, like a museum-going child might observe a foot-long African beetle. Meanwhile, Virgin also makes clever use of music, borrowing from Lionel Richie, the theme from The Greatest American Hero and the musical Hair, for scenes I wouldn’t dare spoil.

Yet for all its cunning, there are times when Virgin is clumsier than its subject. Keener, Banks and Jane Lynch (who plays Andy’s sexually-aggressive boss), do well in support, but the scenes with the fellas are weak; at one point, Rudd’s David and Cal are reduced to a “Do you know how I know you’re gay?” debate. Malco’s Jay provides a little more pizzazz than his counterparts, but twice he’s involved in sequences that are all foreplay and no climax. The most notable of these comes when Andy insults Jay’s girlfriend in an effort to protect his friend’s infidelities and is inches away from being on the losing end of a beat-down until the movie inexplicably cuts away to David having an absurd pants-dropping meltdown, after which the battle between Andy and Jay’s girlfriend never resumes.

It’s for these reasons that The 40-Year-Old Virgin fails to become a superb comedy. At best, it’s better than average with a few superb moments. Still, it’s nice these days to be able to follow a character we can root for. In this current comedy climate, where the odd and the twisted are simultaneously abhorred and revered, it’s refreshing to come across a story that ultimately decides that being different is okay. The 40-Year-Old Virgin isn’t worth saving ourselves for, but it’s an experience most grown-ups can enjoy. No regrets.
Posted by Jason Bellamy at 11:05 PM

After a few viewings of this movie I've come to appreciate it a little more than the first time through. But I think it's been for different reasons than you lay out here. I've always found Carell's character to be kind of annoying, and while I don't really get on board with his friends and co-workers ridiculing him, I have enjoyed their individual silliness, while it seems to grate on you.

As such, it won't surprise you that I consider Anchorman one of my favorite comedies of the decade...

Yeah, the individual silliness did grate on me when I saw this film (it's only been the one time, upon its release). That should have been my first clue about Apatow, actually, because I remember thinking: this movie seems to think I'd want to play poker with these guys; but I can't stand these guys.

Oops. And now I realized I commented on Anchorman in the Knocked Up comments. Arg.