Head of the Class: An Education 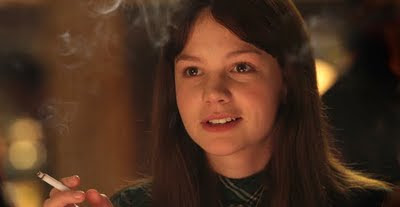 How many times at the movies have we watched the plight of a young girl coming of age? And how many times have we watched that not-quite-a-woman tiptoe between the expectations of her parents and the life her heart desires? Countless times. Too many times. And yet for all the ways that An Education should be tediously familiar, here is a picture that time and again feels refreshingly new. It doesn’t reinvent any formulas, let’s be clear. It revitalizes them. For that, don’t heap praise upon the memoirist, Lynn Barber, or the screenwriter, Nick Hornby, or even the director, Lone Scherfig. Credit the star. An Education is powered by an absolutely enchanting performance by Carey Mulligan as Jenny that’s as familiar as a birth and as thrilling as one, too. That’s fitting, actually, because in An Education a young woman comes to life and a star is born before our eyes.

You read that last part correctly. Mulligan’s performance is so impressive that it’s hard to keep from imagining what’s next. But let’s save the future for later, because there’s too much to enjoy in the present. If Mulligan’s portrayal here isn’t 2009’s best performance by an actress, it’s at least the most intoxicating. Her Jenny oozes a spirit that’s impossible to put down. Younger audiences are likely to identify with Jenny, sharing her desire to break free of the partial reality of schoolbooks and to engage with life – exploring romance, seeing the world, becoming someone. Older audiences, meanwhile, are likely to fall in love with Jenny, recognizing with bittersweet nostalgia that period of life when crisp perception and virginal ignorance act as partners in the same dance. Jenny is a rose just starting to bloom. You can resist her charms if you’re so determined, confident in the knowledge that these petals of optimism will eventually wither and fall, but why? Better to enjoy the spring. If Jenny’s verve can illuminate the dark and damp corners of Twickenham, England, circa 1961, she can certainly brighten your day. All you need to do is part your curtains of cynicism for a while and let the sunshine in.

Believe me, it’s worth it. Like Ellen Page in Juno, Mulligan commands the screen with unusual grace. Also like Page in Juno, Mulligan doesn’t do it alone. Where Page had Jason Bateman, Jennifer Garner, Michael Cera and J.K. Simmons, Mulligan has Peter Sarsgaard, Alfred Molina, Cara Seymour and Emma Thompson. As with Mulligan’s principal Jenny, these supporting characters don’t feel particularly new, but the performances behind them are distinctive enough that they don’t remind of anyone else either (except perhaps Seymour’s soft and squeaky mother, who could be an amalgam of several Brenda Blethyn characters). In instances when believing in the plot feels like walking a tightrope, it’s the conviction and warmth of these performances that keeps us from looking down. Of course, credibility isn’t everything. Colorfulness is worthwhile, too. Reined in a bit, Molina’s constantly exasperated father might have been more convincing, sure. But would he have been as entertaining? Not likely. Expect Molina to earn an Academy Award nomination for Best Supporting Actor and to have a fair shot at winning. It’s that kind of performance.

The only shame in giving praise to Molina is losing Sarsgaard in the shuffle. Of the supporting characters in this film, Sarsgaard doesn’t act most, but he acts best. Sarsgaard’s only mistake in playing David, the mysterious older man who (mostly openly) courts the 16-year-old Jenny and sweet-talks her parents into endorsing the relationship, is making it look too bloody easy. Sarsgaard’s David is everything the film needs him to be: assertive and yet easygoing, responsible and yet a bit dangerous, smooth and yet not so smooth that we always distrust him. The film’s romance works not just because we can see all the reasons why the schoolgirl would fall for the older man but also because we recognize all the reasons why the older man would fall for the schoolgirl (and not in a twisted, predatory Roman Polanski kind of way, to be clear). If it’s true that Jenny’s life was “boring” before she met David, the reverse is doubly true. We see that, of course. Jenny doesn’t. We also see something else: Jenny might be taking advantage of David as much as he’s taking advantage of her. This is the girl who yearns to live more than she yearns to love, remember. David is Jenny’s ticket to adventure more than he’s her destination. An Education might not be a complicated film, but nuances like these keep it from being dim.

For striking this nice balance, credit of course goes to Scherfig, who brings together these terrific performances and marries them to a lively soundtrack that’s as delightful as Hornby’s screenplay. An Education is polished without being showy. It has a brisk pace and cinematography that finds energy in its subject instead of creating it with camera movements. An Education’s only significant misstep is its final 10 minutes, in which the movie finally becomes too trite for us to pretend otherwise. Thankfully, Mulligan’s performance is so rich and satisfying that the bitter taste of the lackluster conclusion doesn’t last long. This is a performance to cherish. What’s next for Mulligan is difficult to guess because the sad truth is that actresses in 2010 have only a few more choices than working women of 1961. More often than not, female movie characters come of age, get lost in love or are reduced to sexual props. Still, An Education reminds that what’s old can feel new again.
Posted by Jason Bellamy at 9:42 PM

You are spot on in your assessment of Mulligan; well written. She is radiant, talented, and touching. She makes the movie. You cite the last ten minutes as "too trite for us to pretend otherwise." I agree. Unfortunately, I felt that triteness infiltrating the film in other places, and so, overall, I wasn't very moved or impressed by this film - but I was impressed by Mulligan as Jenny. We will see her again.

Very well said; I saw this a few weeks back and kept trying to think of what to say other than praise the performances. The script and the film seem lacking in the face of the acting, and it ends much too cleanly. But the trio you mentioned, and the supporting cast, made for wonderful company.

To borrow Tommy's line, this whole film makes for wonderful company, even when it is overly trite. And Mulligan just has that something, not just once or twice but over and over again.

Nice review! As I wrote on Twitter after I saw AN EDUCATION...I rarely use the word LOVELY to describe anything, but it seems so fitting here. In other words, AN EDUCATION as well as Mulligan's performance is just plain lovely. And Hokahey is right: we will definitely see her again.

Thanks, Kelli. Interestingly enough, Mulligan has a small part in Brothers, which I saw the other day. It isn't much, but she's good.

Here's hoping she gets roles worthy of her talents. That's the hard part.