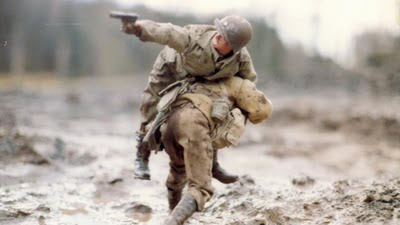 The only U.S. Army jeep in the Belgian town of Marwencol has years worth of wear and tear on its tires. That’s because whenever Mark Hogancamp walks into town, he drags the jeep behind him on a small stick. Marwencol, you see, isn’t a real town in Belgium, and the jeep isn’t real either. They’re both models, part of an imaginary world that Hogancamp created in an attempt to comfort his troubled mind. In 2000, Hogancamp was attacked by several men outside a bar and severely beaten. He was in a coma for nine days and spent 40 days at the hospital – learning to walk again, learning to write again – until his Medicaid ran out. Still in need of therapy, but with no money to pay for it, Hogancamp turned his attention to Marwencol, a miniature World War II-era town initially populated by Hogancamp’s G.I. Joe alter ego and 27 Barbie dolls that starred in a miniature narrative spun out of Hogancamp’s imagination. Over time, other characters entered the meticulously arranged environment, many of them based on Hogancamp’s friends, and Hogancamp documented the evolving story through intimate, carefully considered photographs. For its creator, Marwencol was a coping mechanism, a neighborhood of make-believe allowing Hogancamp to work through real-life issues. But thanks to his photographs, it was also something else: art.

Watching Jeff Malmberg’s documentary, named after the fictitious village, it’s the intimacy of Hogancamp’s art that’s most affecting. To be sure, Marwencol is a fascinating human-interest story that uses Hogancamp’s fictionalized reenactments as a means of learning about the real man – a connection that isn’t difficult to make given that Hogancamp is prone to speaking in the first person when describing the exploits of his miniature stand-in. Hogancamp is deeply invested in Marwencol. Probably too invested. It’s impossible to tell where his fantasies end and his real life begins. And without explicitly asking the question, Malmberg forces us to consider whether Marwencol is liberating Hogancamp or imprisoning him, helping him to reenter society or making it all too easy to avoid it. That there’s enough in the film to make compelling arguments either way is evidence of the documentary’s appeal as a portrait of human trauma. But for me the real-world struggles of Hogancamp are diversions from the more basic and more compelling experience of watching an artist at work. Hogancamp never meant for his scale-model dream-making to be art. His snapshots were the equivalent of a personal journal. But it was art just the same – demonstrating the compositional skills of a skilled photographer, the storytelling skills of a writer and the expository skills of an illustrator. And once Hogancamp’s photographs are married to his narrative descriptions via Malmberg’s film, it becomes the stuff of cinema.

That’s why Marwencol repeatedly inspires thoughts of Werner Herzog. Hogancamp’s oddities and obsessions, not to mention his struggle to cope within the cruel human world, make him an ideal Herzogian subject. (On that note I should mention that while Malmberg seems intent to avoid exploiting his subject, he also makes the curious decision to conceal one of Hogancamp’s peculiarities just long enough to use it as a tacky second-half plot twist.) But Herzog also comes to mind because of Hogancamp’s artistic single-mindedness. The very sensibility that inspired Herzog to drag a real steamship over a mountain for Fitzcarraldo must be the same one alive in Hogancamp’s scale modeling – in miniature, of course. Point being that Hogancamp could be called crazy, or at least imbalanced, for the way he immerses himself in his quasi-fictions, but so could Herzog. And although it would be easy to criticize Hogancamp for the way he lives through his fantasies, is he all that different than Quentin Tarantino, who repeatedly uses his films to validate his own interests? I’m not sure he is. With his awkward manner and modest lifestyle, Hogancamp comes off like a rather pathetic figure (particularly in contrast to the uber-confident Tarantino), but his habit of coping with life by playing God within his fantasies isn’t all that unusual. As far as I’m concerned, Marwencol deserves to be placed on the shelf next to Burden of Dreams and Hearts of Darkness; it’s a portrait of an artist who loses himself to his art.

And what striking art it is. Take a moment and look at the image atop this post, or the one below this paragraph. From even a slight distance, these could be frames of a big-budget Hollywood movie – deleted scenes from Saving Private Ryan or The Thin Red Line. The figures within the portraits are lifeless, but the shots have personality, vitality and movement. They have an aura history about them, too, instantly felt backstories, regardless of whether you’ve heard Hogancamp’s narrative. Shots like these are a reminder that art doesn’t need to be expensive or complicated to be compelling and rewarding. 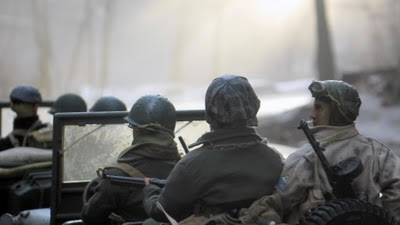 And that brings us to Battlfields (video embedded below). As you may or may not know, in addition to being a movie blogger, Hokahey is a teacher of 8th-grade history and the head of his Cape Cod school’s film club. Thus, it was in union of those vocations that Battlefields was born – a 4-minute depiction of the Battle of Antietam that, like Marwencol, uses miniature action figures to reenact a mighty war drama. By including Battlefields in this review, I don’t mean to suggest that Hokahey’s short rivals Marwencol or Marwencol; Hokahey worked on Battlefields with a few of his film club students over the first semester of this school year, and so the film is both meticulous and carefree. Yet for all its DIY modesty, Battlefields is a captivating experience that makes the Battle of Antietam come alive. The short includes shots of the actual battlefield, a few descriptive subtitles and some Civil War battle sound effects (booming cannons, musket volleys, whinnying horses), but most of the drama can be attributed to its various camera movements, angles and cuts. That’s why even though Battlefields has obvious usefulness as a historical teaching tool (in all honesty, I’m not sure that the Battle of Antietam is as palpable or accessible in Ken Burns’ PBS masterpiece Civil War), Hokahey’s film is even more valuable as an exemplar of the essence and effect of cinematography.

With that said, let me be perfectly clear: I’m biased. Hokahey isn’t just a friend in movies; he’s my uncle. But I’m not writing about Battlefields to convince you of its greatness as art (though I do think you’ll enjoy it). I’m writing about Battlefields because of what it teaches us about art. By creating a drama out of inanimate objects, Hokahey’s short, like Hogancamp’s photos and Todd Haynes’ Barbie-doll tragedy Superstar: The Karen Carpenter Story, enhances our ability to appreciate the inherent emotions of compositions themselves. As far as I’m concerned, aspiring filmmakers shouldn’t be allowed to make a film with human actors until they’d made an experimental film using inanimate ones. I can’t imagine a better way to learn the basic values of every pan, every zoom, every close-up, etc. These little worlds are hugely educational.

Posted by Jason Bellamy at 8:19 PM