Some Scandals Are More Memorable Than Others: Notes on a Scandal 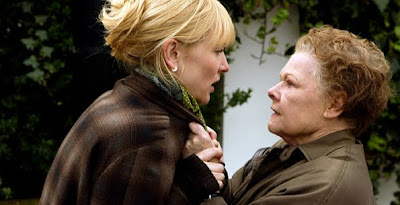 [Apropos of nothing (other than being busy), The Cooler offers the following review, written upon the film’s release in the author’s pre-blog era.]

If Lon Chaney was the man of 1,000 faces, Judi Dench is his polar opposite: the woman of one expression. Though a powerful actress almost beyond measure, Dench’s sourpuss scowl is such a constant that were she a bit younger (or at least younger-looking) we’d have to wonder if her frown had been Botoxed into place. Then again, given her penchant for playing crusty old birds, Dench has as much need for sweetness as Keanu Reeves has for an Oscar acceptance speech, and in the end Dench’s default expression suits her niche as perfectly as big red shoes fit a clown.

Thus it’s no shock whatsoever to see Dench playing a “battleaxe” teacher in Richard Eyre’s Notes on a Scandal; Battleaxe, I believe, really is Dench’s middle name. What is surprising, however, is the range of emotion the septuagenarian gets out of that tight-lipped visage. If not for Hugo Weaving’s impressive demonstration behind the face of Guy Fawkes in V For Vendetta it wouldn’t be a stretch to call Dench’s turn the best masked performance of the year. That may sound like a backhanded compliment – and in most cases it would be – but in this case that’s genuine praise.

In Notes, Dench plays a woman in hiding. Her Barbara Covett spends her days keeping the world at arm’s length, which isn’t hard to do since the world is scared to get any closer. Barbara is the teacher that the students respect and that fellow staff disregard for the very same reason: she seems to be without personality. When surrounded by others she sits quietly, like a hiker trying not to attract the attention of grazing bears. Meanwhile, her eyes scan the room like surveillance cameras, always recording. At night, Barbara’s day comes to life in retrospect, as she scrawls her observations in her diary, giving them an enthusiasm they never found in the sunlight.

Precisely what Barbara records in her diary on the average day, we never learn. As the film begins, the subject of Barbara’s curiosity is a new art teacher, Cate Blanchett’s Sheba Hart, who in the coming weeks will provide the kind of juicy diary material Kitty Kelley would kill for. But even from a distance Barbara dissects Sheba like a science experiment, her acerbic observations delivered to us via viciously tasty voiceovers that Dench infuses with venom; some of the best written and delivered movie narrative since Morgan Freeman’s Red in The Shawshank Redemption.

As narrator, Barbara provides us a window to her thoughts and emotions, which means that Sheba should be harder to know, and yet the opposite is true. Barbara editorializes in her diary, but as she and Sheba become friends she mostly listens. Sheba is an open book: married too young to her too-old-for-her husband (a terrific Bill Nighy) and ultimately as naïve and needy as she is beautiful. All of which comes together to create the titular scandal: Sheba’s passionate though misguided (not to mention illegal) affair with a 15-year-old student (Andrew Simpson).

Barbara finds out about the affair by accident: spotting the couple post-coitus. Confronting Sheba, she demands an explanation and gets one: a sharply-edited blend of flashbacks and confession. As Sheba talks, Barbara spots an opportunity. But an opportunity for what exactly? For illicit diary material? For some excitement in her life? For instructions on seducing teenagers? Or perhaps something more devious? I’ll let you find out, but not without noting that Barbara and Sheba’s last names are by no means coincidental.

Actually, just about everything in this film is delightfully deliberate (or annoyingly so, depending on your taste). Based on a book by Zoe Heller, the screenplay was adapted by Closer’s Patrick Harber, whose influence is unmistakable. One again, his characters are cold, selfish, vindictive and just as likely to use sex as a weapon as for a function of intimacy. These characters are, in another word, human. They may not represent the entire population, and at times they wear their hearts a little too obviously on their sleeves (not everyone can have voiceover), but they are never romanticized or made precious, and that’s a refreshing break from the norm.

Powered by a piano-pounding Philip Glass score, Notes moves forward without a breath, coiling in on itself until it breaks. The final act will be too much for some, and naysayers will attempt to pooh-pooh the picture by comparing it to Fatal Attraction – perhaps forgetting that the Glenn Close melodrama was an Oscar nominee for Best Picture. But while recognizing that Notes doesn’t close as smoothly as it opens (the final scene is especially in error), I won’t do so at the risk of throwing out the bunny with the boilwater – er, the baby with the bathwater. For all but five of its 93 minutes, Notes is one of the most engrossing pictures of the year, even when flawed.

Much of the credit goes to Harber and Eyre, but not to be overlooked is cinematographer Chris Menges, whose shots are impressive for their everyday precision. Not the lighting: the greenish haze of the school halls, the sunny glow of Sheba’s upper-middle-class dining room and the cave-like darkness of Barbara’s basement abode. In a film where characters dip into the surreal, such environmental authenticity becomes paramount as a counterbalance, and Menges makes this tale of national scandal feel like it’s happening just around the block.

But this is a year-end, Oscar-tempting film for actors, and Notes would be lost without its principle trio: Dench, whose precise vocal inflections make Harber look like the czar of screenwriting; Blanchett, who wraps Sheba’s contradictory traits into a frighteningly believable package; and Nighy, whose performance should be noted both for its cheerful ease and its saliva-spewing rage (the best performance of the film). Armed with less gifted portrayals, this film might have been a disaster. Instead, Dench, Blanchett and Nighy turn a roadside squabble into one of the most gripping scenes of the year and make Eyre’s film, yep, noteworthy.
Posted by Jason Bellamy at 9:12 PM