The Men Behind the Curtain: The Ides of March 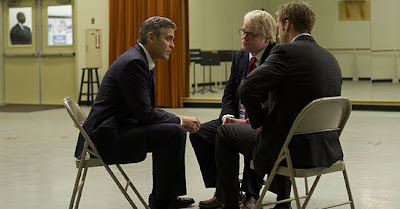 Near the beginning of The Ides of March, two political operatives are having drinks with a reporter named Ida Horowicz (Marisa Tomei). One of them is Philip Seymour Hoffman’s Paul Zara, the veteran campaign manager whose gray hair and ample waistline are symbols of the wear and tear of his chosen career. The other one is Ryan Gosling’s Stephen Myers, a young, good-looking crackerjack strategist for whom politics hasn’t lost its shine. Paul is a lifer; if he weren’t employed by this campaign, he’d be chain-smoking his way through another one. But Stephen, while not new to politics, is still in search of his dreams. He doesn’t want his candidate to win because he’s on the campaign; he’s on the campaign because he wants his candidate to win. The candidate in question is Governor Mike Morris, played by George Clooney, who also directed the picture, and while Paul no doubt sees in Morris the opportunity for political success, Stephen sees in him the opportunity to bring about Real Change. Morris must win, Stephen argues, because the country needs him. But Ida isn’t buying it. The system is the system, she argues, and politicians are politicians. “He’ll let you down sooner or later,” she says. And unless your only exposure to politics is The West Wing, you know she’s probably right.

The Ides of March is a throwback to 1970s films about political disillusionment that seizes on the emotions of the moment. Direct comparisons of Clooney’s Morris to President Obama are problematic, but Gosling’s Stephen is an effective stand-in for so many educated young(er) people in this country who thought Obama was change we could believe in. Stephen brags that at 30 he has more political experience than most people 10 years older, but his affection for Morris blinds him to all the lessons that he must have already learned – first and foremost of which is that politicians are more alike than they are different. (The rest of the review contains spoilers.) Because we know politics, and even more because we know politics movies, it’s of little surprise that Ida’s warning proves prophetic. Adapted from Beau Willimon’s Farragut North – a play with a title that’s sexy only to those inside the Beltway – The Ides of March is yet another movie in which idealism is snuffed out by the inherent corruption of the system. It’s a storyline we’ve encountered many times before, both at the cinema and in life, and yet it possesses a hint of originality: If at first glance Stephen appears to be a victim of the system, a closer look reveals that he was a wheel of the machine all along.

As the brains of Morris’ presidential campaign, Stephen and Paul are the men behind the curtain of their great and powerful candidate, and not just figuratively: in one scene the two strategists argue with one another on the other side of a huge American flag that’s serving as the backdrop for one of Morris’ stump speeches. Because Clooney never portrays Morris as a dolt, he never seems to be the mindless puppet that, say, George W. Bush is in Oliver Stone’s W., but even if Morris has his own voice his words are clearly Stephen’s, and they aren’t always genuine. Early in the film, Stephen encourages Morris to call for legislation that would make it mandatory for 18-year-olds to do two years of civil service in exchange for paid college education. The plan’s genius, Stephen points out, is that the only ones likely to oppose it aren’t eligible to vote. As Stephen explains the plan to Morris, it never occurs to him that by influencing Morris’ public stance he is orchestrating a deception. A small one, perhaps, but one that nevertheless demonstrates that politicians are often only as corrupt as their handlers. Later on, Stephen will go wide-eyed when he learns that Morris isn’t the man he thought he was, but that shouldn’t distract us from the way that Stephen covers up Morris’ mistakes without blinking. He isn’t corrupted by the system. He’s made for it.

To the degree that The Ides of March provides anything resembling potent commentary, that’s the extent of it. After a rather promising opening third that reminds of early Alan J. Pakula movies, the film quickly devolves into a plot-heavy John Grisham-esque thriller that reminds of late Pakula, with some circuitously preachy David Mamet thrown in. It’s a movie about characters more so than an examination of character. But thanks to the talent of the cast, that’s not so bad. Gosling has a silent intensity that reminds less of his own silent-intense performance in this year’s Drive than of Al Pacino’s titular performance in Serpico. Clooney, no surprise, exudes electable charm and power-hungry strength as Morris. Hoffman portrays the confidence and paranoia of a guy who knows all the tricks and fears they’ll be used against him. Paul Giamatti oozes ruthlessness as rival strategist Tom Duffy. (And, seriously, there's something wrong with Hollywood when it takes this long for Hoffman and Giamatti to be pitted against one another as intellectual brawlers.) Jeffrey Wright, as a senator with his eyes on a cabinet position, is engaging in the odd, twitchy, stealing-scenes-from-himself sort of way that Wright usually is. And Evan Rachel Wood captivates as the young campaign intern, Molly, who knows exactly what she wants and, alas, gets much more than that.

The film’s best scene is one at a hotel bar in which Stephen attempts to seduce Molly and Molly seduces Stephen even harder. Clooney captures Gosling and Wood in sexy, golden-hued close-ups that suggest he was paying attention when he starred in a similar scene in Steven Soderbergh’s Out of Sight. On the surface the scene might appear to offer nothing more than some perfunctory sexual energy, but it’s worth noting that Molly entices Stephen into bed much the same way that Stephen looks to entice votes from the public: she tells him exactly what he wants to hear, while acting according to her own best interests. This, The Ides of March seems to suggest, is the real problem. What's ailing us is that, from politicians to campaign managers to reporters to mostly innocent interns, we're all in it for ourselves. This is hardly a shocking conclusion, and the film also suffers from a plot that requires several worst-case scenarios to play out almost simultaneously in order to create a lick of tension. But Clooney and his actors make the film episodically thrilling. If on the whole it’s an all too familiar cliché, well, so is our political system.
Posted by Jason Bellamy at 9:07 PM

I enjoyed this movie and was nicely gripped after Gosling's character gets fired and then is turned down by Tom Duffy. As far as performances go, Hoffman and Evan Rachel Wood were the best, and the scene you describe in your last paragraph is definitely compelling and wonderfully staged. This was a good Clooney effort. He's a careful filmmaker. For my tastes, he needs to take some risks and try something more daring.