Real Human Beings: Into the Abyss 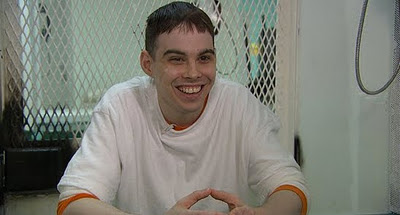 One of the reasons I’m fond of the documentary format is because, having written my share of news stories and features, I can relate to it. I have no concept of what it would be like to hold the tips of my thumbs and index fingers together and gaze through a rectangle made out of my hands while determining how to block an epic fight sequence, but I do know what it’s like to pore over vast amounts of data and try to bring the key points to the surface, and what it’s like to try to arrange that data in a way that’s compelling and propulsive, and what it’s like to interview people and try to get them to open up and articulate their feelings in an interesting way. The latter task can be especially challenging, but the great ones make it look easy. Werner Herzog is one of the great ones. People open up to him. They might not speak the truth exactly, but they reveal themselves honestly. As a documentary filmmaker, that’s Herzog’s gift. Unfortunately, sometimes honesty isn’t enough for Herzog. That’s his biggest weakness.

Herzog’s indulgences with truth are fairly well known among cinephiles, even if they’re often hidden within his films and infrequently dissected outside of them. Critics tend to assist Herzog in covering up his manipulations, even after he cops to them, by romanticizing his quest for “ecstatic truth,” which when you get down to it is Herzog’s term for “stuff that isn’t actually the truth but makes for a better story,” which when you get down to it is the kind of stuff that can get a newspaper journalist fired. A particularly egregious example would be in Little Dieter Needs to Fly, the 1997 documentary about a soldier who was held in a Vietnamese prison camp until he escaped, who is shown repeatedly opening and closing his front door to ensure it’s unlocked, which Herzog positions as evidence of the man’s imprisonment trauma when in reality it’s an “ecstatic” fabrication. If Into the Abyss, Herzog’s latest film, contains such deceits, I couldn’t spot them, but there are a handful of times when Herzog is guilty of leading the witness, putting words into the mouths of his subjects in an effort to make their stories more dramatic or poignant than they would be otherwise. The difference this time is that Herzog’s manipulations are blatant: we can hear Herzog guiding his subjects, articulating the memories he wishes they’d share. Into the Abyss isn’t among Herzog’s greatest documentaries, but in this respect and others it’s one of his most transparent.

That openness begins from the outset. Into the Abyss is a wandering exploration of capital punishment itself, as examined through a specific 2001 triple homicide in Texas carried out by two then-teenagers, one of whom landed on death row. His name is Michael Perry, and he’s one of the film’s first talking heads, interviewed by an unseen Herzog while sitting on the other side of shatterproof glass, only eight days away from his execution. Herzog asks Perry about what it feels like to know his death is coming, and he probes Perry with enough general questions about the murders to give him a chance to insist his innocence and, in doing so, reveal his dubiousness. Then Herzog tells Perry that he doesn’t believe in capital punishment, and that while he might not like Perry, he respects him as a human being and wishes him well. If that sounds somewhat contradictory, it’s only because it’s sincere. From that early exchange, Herzog’s position is clear: he doesn’t think the government should perform executions, even if the subject is more monster than man.

The rest of the film unspools from that recognizably antithetical position (one that, full disclosure, I find very relatable). Herzog attacks the details of the awful crimes: We learn that Perry and his accomplice, Jason Burkett, committed the murders because they wanted to steal a Comero. We see crime scene footage in which egg shells in a bowl and balls of cookie dough on a baking sheet remind of the life in progress that the young men stopped short. We see interviews with relatives of the victims, who because of the nature of the crimes became victims of a different kind – traumatized, heartbroken, empty. We even see the elbow of a corpse, submerged in a small lake. Herzog attacks the toll of capital punishment with equal honesty, most notably through the tearful comments of a death row priest, who has comforted countless lethal injectees in their final moments, and the dark memories of a former captain of a tie-down team, who assisted in more than 125 executions until he felt his own existence slipping away. Between these two extremes there’s an interview with the woman who met Burkett after he was sentenced to 40 years in prison and married him, and (mysteriously) became impregnated by him, and has clearly found something to love in this man, even if she’s incapable of accepting who he was.

The sum effect of these inspections is unspecific, which is to say that Herzog doesn’t lead us to a neat and tidy conclusion. People for and against the death penalty could watch this film and feel that it vindicates their position. The director himself is clearly against capital punishment, but even though Herzog gets the sister of two of the victims to agree that Jesus wouldn’t approve of the death penalty, when she asserts that “Some people just don’t deserve to live,” Herzog has no comeback, and it’s unlikely he’d wish away the sense of peace the woman says she received from Perry’s execution. This isn’t a film about right and wrong, you see. It’s about wrong and wrong. It’s about guilty men who refuse to take accountability for their actions and about the innocent people who can never break free of the consequences of the crimes. The emotions involved in murder, imprisonment and capital punishment are complex, and Herzog never once suggests otherwise. He openly wonders why God allows capital punishment, but he seems not at all surprised that humans do.

Almost all of the interviews in this film have a degree of peculiarity that I suspect extends beyond even Herzog’s imagination. There’s the priest who tears up while talking about squirrels, the two killers who continue to insist on their innocence despite overwhelming evidence to the contrary, the wife who rolls her eyes at death row groupies without realizing she is one and the guy who was stabbed by a screwdriver and went to work 30 minutes later. And then there’s Delbert Burkett, Jason’s father. In prison on drug charges, he’s the most fascinating character in the film, even though he had nothing to do with his son’s crimes. Or did he? Delbert tells Herzog that if he’d been present in Jason’s life, been a father to his son, he thinks the murders wouldn’t have happened. He may be right. Based on Delbert’s interview, it appears the only father-son bonding that he and Jason ever experienced is when they were handcuffed to one another while being transferred to another prison. It doesn’t get any lower than that, Delbert admits, and for his crimes as an absent father he wishes he could take on his son’s sentence. As he describes this, Delbert unintentionally shows the cost of mere imprisonment when he suggests that his son won’t be released until 1941. “You’re in the wrong decade,” Herzog corrects him. As punishments go, that’s probably severe enough. Except when it isn’t.
Posted by Jason Bellamy at 8:51 PM

I was fascinated by the interview with Delbert Burkett. Then I saw that he was not in prison on drug charges, but for Indecency with a child. It made me sick. He claims Jason's life may have been different if he was there, but who's to say it wouldn't have been worse?