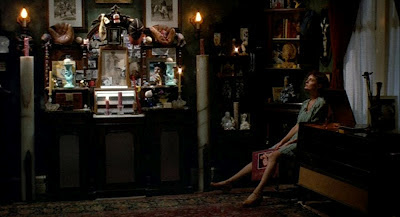 “I’ve tried ‘em all, I really have, and the only church that truly feeds the soul, day in, day out, is the church of baseball.”

The opening three minutes of Bull Durham are a masterpiece of thematic development. The film begins with the sound of a female gospel singer and a montage of black-and-white photographs featuring baseball legends at their best: Pete Rose making a headfirst dive; Jackie Robinson stealing home; Babe Ruth soaking in the adoring cheers at Yankee Stadium. “I believe in the church of baseball,” a woman narrates, and with that the camera pulls back from a picture on the wall and takes a Rear Window-esque tour of her home, panning past several more baseball photos, some candles and a bed before finding the narrator herself, sitting in front of three mirrors, one of which has a baseball card tucked into its frame, fixing her hair and makeup. She is Annie Savoy, and her personal introduction includes mentions of Buddha, Allah, Brahma, Vishnu, Shiva, Isadora Duncan, Emily Dickinson, Walt Whitman, Frank Robinson, Milt Pappas, sex, foreplay and light-hitting middle infielders with great gloves. It’s the kind of monologue that’s as revealing for its manner – scattered, worldly and cosmic – as its content, and by the time it ends, with Annie walking into the bright light of a minor league ballpark as organ music plays in the background, it’s hard to think of baseball as anything less than spiritual.

Bull Durham treats baseball with equal parts reverence and levity. It’s a hard game, and it humbles even the most talented professional athletes who try to play it, but it is a game – a joyous, beautiful game – played in this case by young men who, as often as not, act like little boys. Over and over again, Bull Durham finds baseball at the point at which the reverence and levity overlap: in the first baseman who blesses his bats with a chicken bone cross, in the star pitcher who believes he needs to wear women’s garters to succeed and in the catcher who knows that throwing a ball at the team mascot can work as an effective setup pitch. In one of the movie’s most memorable scenes, the ever exasperated manager of the Durham Bulls orders his team into the showers and lectures them on their lackadaisical effort, calling them “lollygaggers.” “It’s a simple game,” the manager insists. “You throw the ball. You hit the ball. You catch the ball.” What makes his tongue-lashing so comical is our awareness that baseball is anything but simple. It’s a game not unlike religious faith: straightforward in design but difficult in execution.

The church of baseball doesn’t discriminate. It welcomes airheads like Tim Robbins’ Ebby Calvin “Nuke” LaLoosh, the young pitcher with a lightning bolt for an arm and fungus on his shower shoes. It welcomes Kevin Costner’s Crash Davis, the baseball lifer who is smart enough to know what it takes to get to the big leagues but isn't quite talented enough to play there. It even welcomes Annie, the unofficial queen of minor league groupies, who loves the game, the young men who play it and the sex she has with them with equal fervor. Annie is played by Susan Sarandon, who like a clean-up hitter winning the World Series by going yard in the bottom of the ninth provides one of the best performances of her career in a role that most actresses can only dream of playing. By Hollywood standards, all it takes for a female character to be “complex” is to have boobs and a brain, but in writing one of the best sports movies of all time director Ron Shelton also crafted one of the richest female characters in cinema history – a woman who can convey her love of the game, her mysticism and her healthy sexual appetite in less than two minutes and still seem mostly sane. Sarandon acts the hell out the part, oozing confidence and eroticism without sacrificing yearning, vulnerability or romanticism. If Bull Durham is the Casablanca of baseball movies – filled with a love triangle, passion, battle (on the baseball field) and countless quotable lines – Annie is this movie’s Rick, the local legend who everyone knows and who has seen everything and who walks to the beat of her own drum.

Just like Humphrey Bogart, Sarandon glistens in the spotlight without leaving others in the dark. Robbins is hilarious as the bumbling yet arrogant Nuke, the fire-baller who wants to announce his presence with authority but has a tendency for buzzing the broadcast booth. When Nuke coils his lanky frame and looks to the sky in his Fernando Valenzuela-inspired delivery – which actually more closely resembles the twisting windup of a Dodgers pitcher who would come along years later, Hideo Nomo – it’s obvious to any baseball fan that Robbins isn’t slinging the ball with the velocity of Dwight Gooden, but he’s graceful enough to look the part. Costner, meanwhile, was born to wear eye-black, and Crash is right in his wheelhouse. Where Robbins’ baby face and long limbs make Nuke seem stuck in adolescence, Costner’s two-day stubble and short, sturdy frame make Crash look like a fully grown man who feels old age creeping around the corner. (Of course, the physical disparity between Nuke and Crash only underlines the gap of maturity and wisdom that defines their relationship.) It’s become fashionable over the years to dismiss Costner’s acting, but what he does in Bull Durham shouldn’t be taken for granted. His gift isn’t swinging a bat like a real ballplayer. It’s silently portraying a man at the end of his career looking out over the abyss and wondering what on earth he’ll do on the other side.

In one of the movie’s earliest scenes, Crash arrives in Durham as the proverbial player to be named later in a trade that’s meant to enhance Nuke’s chances of making “The Show,” not his own. On learning that he’s regarded as nothing more than a “stable pony,” Crash decides he’s had enough. “I fucking quit,” he says emphatically, walking out of his new manager’s office and slamming the door behind him. But the manager doesn’t so much as flinch, and a few seconds later Crash pokes his head back inside the office: “Who we play tomorrow?” In Bull Durham, baseball isn’t something you just walk away from. It’s too powerful for that. In the final scene, when Crash sits on Annie’s porch swing having decided his playing days are over, Annie says, “I’m quitting, too. I mean boys, not baseball.” She laughs as she clarifies, as if the idea of giving up baseball is truly unimaginable. Once you put all your faith in something, it’s hard to let go.
Posted by Jason Bellamy at 9:32 PM

An amazing movie, extraordinarily well-written. One can admire just the way Ron Shelton focuses on the word "lollygag." When I return to Bull Durham, I like to imagine an alternate universe where Kevin Costner's stardom retained this level of excellence. I also like his last zen speech:

So well written! I had a brain cramp trying to write this review because it felt wrong not to pay tribute to each awesome line, ranging from the hilarious to the clever to the profound.

* When Millie gives Annie her scouting report on Nuke: "Well, he fucks like he pitches, sorta all over the place." Genius!

* When Annie is altering Millie's wedding dress as they listen to the Bulls over the radio. Millie asks Annie if she deserves to wear white. "Honey," Annie says quietly, "we all deserve to wear white."

Sarandon's delivery of that line is just perfect. I also love the moment when Annie and Crash are at the batting cages together and Crash rips Nuke for being a young, dim pretty boy. Watch the way Sarandon delivers the line, "Young men ... are uncomplicated." Wonderful!

Later in the scene Annie says she's monogamous during the season, and when Crash protests Sarandon shows perfect comic timing, popping her head from being the piece of material hanging in the backstop to say, "It's true!"

Just after that, watch the expression Sarandon's face when she walks out of the cage -- a big shit-eating grin on her face that you have to pay attention to spot. It's almost certainly Sarandon smiling right there, not Annie, but it works; this movie is so playful, and you can feel everyone having a hell of a good time making it.

Oh, one more thing! As I was writing this I did a quick Google search for the screenplay so I could look up a line when my DVD wasn't handy.

I found this, which appears to be the original screenplay:
http://www.imsdb.com/scripts/Bull-Durham.html

Some interesting things I noticed ...

* In the original, Annie has a young black boy named Jackson who sits next to her and wipes of her seat before she sits down. Uh, good idea to remove that one.

* The lollygaggers lecture includes a review of the team's signals. It might have worked. But what's in the movie is streamlined perfection.

* The scene in which Annie barges into Crash's house to lecture him for telling Nuke not to fuck with a winning streak is much longer and more explicit in the original screenplay; I'm sure Sarandon would've pulled it off, but I like the comparative subtlety of the actual film.

* Annie has a long monologue telling Crash her life story at a bar. It explains why she has a shrine built to Thurmon Munson (not that it needs explaining). But Crash asks her questions that don't make much sense coming from him, like "What's so great about baseball?" I know he's supposed to be disillusioned -- I think that's what Shelton was going for -- but I love that in the film Crash is disillusioned precisely because he knows what's so great about baseball, so it pains him that the game can be so cruel.

* When Nuke gets called up, he doesn't find Crash in a pool hall but in a whorehouse, singing "Try a Little Tenderness" surrounded by half-naked women.

* In the morning-after scene, Nuke urges Crash to go to Annie and says of baseball, "I'm starting to like this game." Two things I'm glad they cut.

* Instead of Crash putting toenail polish on a tied-up Annie in the love-making montage, Annie puts makeup on Crash. Um, yeah.

* The one part cut from the movie I wish they'd left in: Annie, after her sex romp with Crash: "The house smelled like sex for days. It was wonderful." Sarandon would have owned those lines!!

I came from Sheila O'Malley's blog...I love this movie above all baseball movies, for many of the reasons you cite, and many more. Here's one: the hilarious little speech Crash gives Nuke about the virtues of maintaining clean shower shoes? It's easy to see that as another funny moment...but later on, when Nuke has been called up and is cleaning out his locker, at one point he's sitting there with his pristinely white shower shoes in his hand. Shelton doesn't highlight this at all: no line for Crash along the lines of "At least you have clean shower shoes", not even a close up of the shoes. You'd never notice it...in fact, I never did until a rewatch a few years ago.