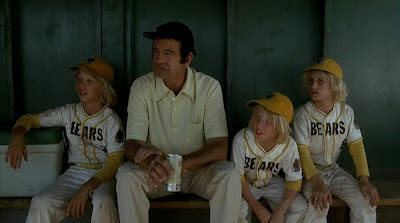 “You’re not supposed to have open liquor in the car. It’s against the law.”
“So is murder, Engleberg. Now put that back before you get me in real trouble.”

One of my favorite moments in AMC’s ongoing series Mad Men comes in the show’s first season when young Sally Draper walks into the kitchen covered head-to-knees in a plastic dry cleaning bag. Her mother recoils. “Sally Draper, come over here this minute,” she says, flicking ash from her cigarette. “If the clothes from that dry cleaning bag are on the floor of my closet, you’re going to be a very sorry young lady.” Needless to say, it isn’t the lecture we expect. And while Betty Draper’s selfish-centered comments hint that she’s never going to win Mother of the Year, the scene says even more about the era in which Mad Men is set – a time when kids did all sorts of dangerous things in the midst of adults who didn’t seem to realize how dangerous they were, or just didn’t care. The Bad News Bears, which is set more than a decade later, is similarly revealing about how times have changed, this time simply by reflecting the era in which it was made. Released in 1976, the movie is about a hard-drinking former professional ballplayer who becomes the manager of a lousy bunch of misfit Little Leaguers for an under-the-table paycheck, and while the movie is designed to make Morris Buttermaker the ultimate in irresponsible mentors, looking back on The Bad News Bears more than 35 years later it’s impossible to ignore just how well he blends into his surroundings.

Sure, Buttermaker is a drunk, toting a beer-packed cooler with him wherever he goes and gleefully swilling while driving or throwing batting practice. But as reprehensible as Buttermaker’s habits are, they are neutralized by the other adults in this movie – parents or opposing coaches – who, like Betty Draper watching Sally risk suffocation while playing inside a plastic bag, witness Buttermaker’s antics and apparently find no behavior so egregious that needs to be nipped in the bud. The ultimate effect isn’t a condemnation of a man so much as of an entire era, when behavior that would now be considered criminal was apparently just colorful. And it doesn’t stop there. Jackie Earle Haley’s Kelly Leak, who must be no older than 14, smokes openly and rides a motorcycle, but no adult gets too concerned about his behavior until the kid disturbs a pregame ceremony by driving his motorcycle across the field. Later on, when Kelly is set to take Amanda Whurlitzer (Tatum O’Neal) on a date, Buttermaker shows concern that Kelly might take advantage of the spunky pitcher, but it apparently never occurs to him that two kids riding a motorcycle sans helmets might crash and die before they ever get a chance to be alone. When Buttermaker objects to 11-year-old Amanda’s date, Amanda sticks up for herself by saying, “I know an 11-year-old who’s already on the pill,” and that cringe-inducing line, as much as any moment in this supposed family flick, underlines that what passed for PG in 1976 isn’t anywhere close to what’s PC today.

Yet while much has changed, too much has stayed the same. The Bad News Bears, which created a template for movies about seemingly hopeless kids improving at sports thanks to the attentiveness of an ultimately caring coach, expertly portrays the point at which adult ambition all too often overwhelms the childhood spirit of the game. Buttermaker, played with comic indifference and gruff irritability by Walter Matthau, makes this mistake early and often. He pushes Amanda to the point of injury. He orders Kelly to catch every ball that comes his way. He orders poor hitters not to swing. But the bigger offender is Roy Turner (Vic Morrow), the coach of the rival Yankees, who has a superiority complex and motivates his team by warning them about the evils of losing: “If you guys lose this game, each and every one of you are going to have to live with it.” Even if Turner didn’t strike his son, he’d be the poster boy for parental delusions of grandeur and misplaced priorities, and you’ve got to think youth sports today would have more compassionate coaches if The Bad News Bears were required viewing before the start of any season. Alas, even in this era of hyperconscious kid-first parenting, there are probably too many Turners and not enough Gil Buckmans (Parenthood), and it’s often the adults in the bleachers who are most in need of being confronted by their own reflection.

In The Bad News Bears, Buttermaker learns his lesson, and, somewhat ironically, it’s when he decides to let the kids play the game just for the sake of playing that his lazy posture and beer chugging are finally endearing. Here, unlike most sports movies, triumph doesn’t come in the form of excellence but in the form of best intentions, and as the Bears’ most uncoordinated players boot grounders and throw the ball all over the infield to the sound of the “Carmen” overture, the display of athleticism is ugly, but the integrity of their effort is truly beautiful. As the Yankees pull away in the championship game and even some of the Bears players suggest that Buttermaker needs to do something to help the team win, he smiles between chomps on his cigar and says proudly, “Don’t worry about it.” Those four words aren’t frequently uttered in sports these days, but in youth sports they certainly should be. One can only hope that the concept of “just having fun out there" isn’t as dated as the rest of this movie.
Posted by Jason Bellamy at 6:43 PM

One of my favorite movies. I remember when a friend's dad took us to see it as kids, my mom warned me "I don't want you coming home talking like the kids in that movie." Apparently, word had already gotten around to the mothers in the neighborhood about the film's mild profanity. (And you're right -- no one even noticed the drinking, smoking or motorcycle riding.) I'd still argue it's one of the best baseball movies ever made.

Will! Thanks much for leaving that memory. That's great. It's hard for me to see it as one of the best baseball movies ever made, only because there seem to be some baseball scenes missing. But its influence is undeniable, and it really does find beauty in the sweet awkwardness of kids trying to play the sport.