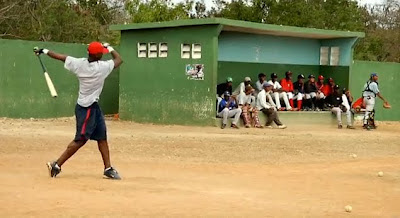 "At the end of the day, he's merchandise."

Major League Baseball's biggest importer of foreign talent is a country smaller than Cuba that turns out approximately 20 percent of the United States' professional baseball players. It is the Dominican Republic, birthplace of current stars Jose Bautista, David Ortiz and Albert Pujols, just to pick a few, plus scores of comparatively anonymous role players and hundreds of guys developing or languishing in the minor leagues. Given the modest size of its population, the Dominican Republic is arguably the most effective baseball talent factory in the world. But the documentary Ballplayer: Pelotero, currently available via On Demand, leaves no doubt that the Dominican Republic's factory operates amidst chaos — lacking responsible and compassionate leadership and thus prone to corruption.

Directed by Ross Finkel, Trevor Martin and Jonathan Paley, Pelotero chronicles the experiences of two aspiring major leaguers, Jean Carlos Batista and Miguel Angel Sano, both of whom, by turning 16, are about to be eligible to sign with an MLB club for the first time. Batista is a quiet kid who lives with his coach and father figure, Astin Jacobo, who instills in Batista a hope that he can land a signing bonus north of $1 million. Sano lives at home with seven family members — or is it eight? even they struggle to keep track — and has the swagger of a guy who knows he might sign for a record bonus north of $5 million. Both players are shortstops, considered to be can't-miss pros, to one degree or another. But just how good Batista and Sano are depends largely on their ages. If truly 16, they are special prospects. If older, not so much. Either way, they will be paid accordingly.

In an impoverished country where making it as a professional baseball player is one of the most realistic paths to fortune, and where the governmental record keeping is, well, a little suspect, the motivation and opportunity to cheat the system are high. Accordingly, MLB now performs rigorous background checks on aspiring players, but those investigations can move at a curious pace. When the July 2 signing day arrives with Sano's age in doubt, his market value plummets. Pelotero depicts a system that holds Sano guilty until proven innocent, with his family members openly accusing MLB franchises of colluding to create a false controversy around Sano's age to reduce his bonus payment. Although plausible from one point of view, this argument doesn't make a whole lot of sense in the big picture. Professional athletics are meritocracies, after all, and teams look for every edge they can get. Colluding to allow one major league franchise to land one unusually talented prospect at below market value creates more losers than winners and would suggest charity more than conspiracy. But because MLB declined to be interviewed for the film, the accusations of Sano's family, somewhat bolstered by the manipulative but hardly illegal dealings of Pittsburgh Pirates scout Rene Gayo, go unchallenged.

Although Pelotero's two-player biographical format and sports subject matter appears reminiscent of Hoop Dreams from afar, in actuality the documentaries are only barely comparable. Pelotero is a consistently slighter film, from its emotional impact to its running time (77 minutes vs. 170 minutes) and thematic vastness. Whereas Hoop Dreams is as valuable for its depiction of daily life in Chicago's projects as for its inside look at sports, Pelotero does little to show us what it means to live in, and try to move on from, the Dominican Republic. In one notable exception, the filmmakers capture one of the players, fresh off landing a multimillion-dollar signing bonus, traveling to get his first passport ... on a motorcycle that also holds his mother and father — a sight that would make his new employers cringe. In another instance, an investigation into the age of one of the players uncovers a thick volume of handwritten birth records within which this player's birth record is curiously scribbled in at the bottom of a page, out of order with the rest. These rare glimpses beyond the baseball diamond provide a strong sense of how much is at stake on it.

Still, it's difficult to watch Pelotero without wishing it were a different film, one that better examined the cost of not making it as a ballplayer, one that made more of an attempt to understand how a kid with almost nothing could walk away from a lucrative contract offer in an act of foolish pride. Instead of getting personal, Pelotero seems determined to portray MLB as uncaring and manipulative, which to some degree might be true. But lost in those attacks on the system is this reality: MLB gives these young men far more than it takes away — something that might not be fairly said about the instructors, agents and family members who use these athletes for their own personal gain. These omissions aside, Pelotero successfully examines a side of professional baseball that most of us never see. And, perhaps not surprisingly, the rule that's true of ballpark franks is true of ballplayers, too: the view of the assembly line is never pretty.

Posted by Jason Bellamy at 8:29 PM

Very cool. I forwarded this to my baseball lovin' friends, one of whom really likes your reviews.

When you briefly compared the film to Hoop Dreams, pointing out how this smaller, slighter film lacks the HD's scope, it made me want to re-watch it immediately. It blew my mind when I first saw it (at 16 yrs old when they wouldn't let us into Pulp Fiction).

Documentary filmmaking is so difficult and usually thankless (financially, anyway), and the guys that did Hoop Dreams famously invested years and years into the project. Makes you wonder if other documentary teams, like the one you just wrote about, could really do their subjects better justice by just sticking it out for longer? To not have any input from MLB seems like a huge detriment to this movie, and I wonder if they would have cooperated over time.