Skateboarding Cinema to the Future: QUIK 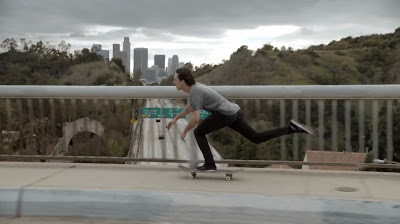 In first, second and third grade, I was mesmerized by the Star Wars trilogy not just as escapist adventure but also as an act of creation. As often as I watched the movies themselves, I watched my TV-recorded VHS copy of the 1983 documentary about their development. (I had a book, too.)

The Star Wars trilogy was full of moviemaking "stuff" that went beyond the usual. Instead of just actors, costumes and sets, there were models, robots and puppets — and things like Jabba the Hutt that seemed to be a combination of all three — not to mention an abundance of rubber and fur that appealed to the Muppet fan in me.

In my not-entirely-thought-through efforts to someday make a Star Wars movie of my own, I focused my initial energy on those smaller creations — even going so far as to beg my mom to buy me some furry fabric so that I could take a shot at making my own Ewok suit — in part because I was fascinated by that stuff, and in part because I knew I couldn't shoot an Ewok scene without an Ewok costume, but mostly because, at the time, owning my own movie camera seemed only slightly more realistic than owning my own Millennium Falcon.

Now digital moviemaking cameras, and editing programs and equipment, are ubiquitous and attainable. Becoming the next George Lucas or Steven Spielberg may not be easy. But making a movie and sharing it with the world? Barring significant income challenges, anyone can do it.

All of which is the long way around to saying that cinema isn't just on the big screen or the TV anymore. It's also on the Web, where sites like YouTube and Vimeo allow a shut-in with an iPhone and a cat to share screening space with professional moviemakers using state-of-the-art equipment.

None of this is news to you. Yet even the most open-minded of cinephiles wouldn't be likely to include a 5-minute timelapse video in the same conversation as the movies of, say, David Fincher. And maybe it's time we should. (Kevin B. Lee nudged us in that direction with a list of five "essential online videos" from 2012.)

More and more, when I need a little dose of cinematic inspiration, one of the places I look is the Staff Picks section at Vimeo. Typically, I scan for travelogue-type movies shot by true amateurs, because in recent years I've made similar movies myself, chronicling weekend getaways to this place or that. But in general if I'm drawn to a movie's thumbnail image I'll do the video equivalent of flipping through its pages.

In the past year I've enjoyed a frenetic road-trip movie composed of 5,000 stills, a touching portrait of a fishing father by his son, a silly spectacle celebrating the numerous ways to open a beer bottle, and so many others. But I'm not sure any direct-to-Web video thrilled me quite like QUIK.

If you haven't watched QUIK, stop here, spend fewer than 6 minutes and watch the movie. No, wait, let me amend that: even if you have watched QUIK, stop now and watch it — and not embedded here. Do it right: click here to see it bigger and, this is crucial, turn up the music! Enable its cinematic soul.

In a series of tweets and in my Bests of 2012 post, I recognized QUIK as the piece of cinema that we'd all be going apeshit about if it appeared within a feature film by a big-name director. I stand by that.

Then again, part of QUIK's charm is that, unlike the Star Wars trilogy, we can sense the modesty of its creation. It's a single-camera production, shot out of the back of a truck, that follows a skateboarder, Austyn Gillette, as he rides through fairly unspectacular parts of Los Angeles and performs fairly unspectacular stunts.

From afar, QUIK might appear to be just another skateboarding video set to music — a dime a dozen on the Internet. But it isn't, and the modesty of the production and the stunts is a big reason why. Directed by Colin Kennedy with cinematography by Marc Ritzema, QUIK isn't about showing off. It isn't about awesomeness. It's about fluidity.

The first 50 seconds establish the environment (concrete jungle Los Angles) and the approach (a moving camera, rolling by, capturing people at work and at play). Then, tilting down from a shot of blue sky and palm trees, we get our first glimpse of Gillette, who skates toward the camera as if catching up and then skates right on by.

The rest of the movie observes Gillette skating through the established environment, jumping off curbs and over obstacles (OK, sometimes fairly spectacularly) and weaving past people who seem as indifferent to him as he is to them.

It is, above all else, an exhibition of unceasing motion. QUIK isn't shot in one take and, given that Gillette wears at least three different outfits, there's no attempt to con the viewer into thinking that this is a single journey. But neither the skateboarder nor the camera ever stops — in fact, as often as not, Gillette is captured swinging his leg to propel himself forward to whatever lies ahead as the camera keeps pace.

The nonchalance of QUIK is felt right down to its sound design, which allows us to hear the sounds of the neighborhood and Gillette's skateboard rolling over the concrete. Thus, QUIK's boldest stroke might be its musical accompaniment, We Barbarians' "Chambray," which has a kind of U2 basement tapes sound to it and fairly ambiguous lyrics that set a mood without dictating narrative.

"Will I go back?" the song asks. "God, I hope not," it immediately answers. It's the perfect exchange for a movie that seems to be about moving to or away from something, about exploration and escape, about living in the moment and chasing the next one.

It isn't difficult to imagine the entirety of QUIK as the climax to a larger story of a young man struggling to find his place in the world (The Kid With a Skateboard, so to speak). In that context, no doubt this sequence would have stood out as some of the best cinema of the year, and movie fans would have fogged windows talking about it.

Cinema doesn't get much better than that. Shot by anyone. Playing anywhere.
Posted by Jason Bellamy at 4:28 PM

This is a great video. You are right, if a theatrical film included this footage, we'd be talking about it because it would be a great way to introduce a very interesting character, and we would know quite a bit about him and his world before we heard any dialogue.

I went to film school right during the cusp of the big switch over; my final project was shot on film, but we also learned to edit digitally. The big thing people talked about then was "one day some kid's gonna be able to make an amazing video in his back yard, and the cameras will look unreal. The playing field, at least technically, will be more level."

This video's pretty much proof of that. Stunning work.

Hokahey: Interesting ... I'd always thought of this as a climactic piece, but you're right: this would be a wonderful way to introduce a character, too. I mean, we're introduced to him here, after all. It works.

Jake: As I probably should have mentioned this above, this clearly isn't an amateur video in the truest sense. According to the Vimeo description, QUIK is "a collaboration between theberrics.com and Quiksilver," and the "special thanks" section of the credits includes none other than Giovanni Ribisi. I mention that out of a sense of basic journalistic obligation before saying that I completely agree with the spirit of your comment: indeed, this is proof of the leveling of the playing field (even if there are other examples that might better demonstrate the true DIY potential for cinema). It's exciting.

Got it. I mean, Ribisi and Quiksilver aside, though, it's just a car, a skater, and a digital camera. Still amazing that we can get quality like that today without half a million dollars.

You know who's stuff is unreal? This video director named Khalil Joseph. Here's his site:

His short film "Until the Quiet Comes" for Flying Lotus blew my mind.

It seems like it's on the same level as "QUIK," some mostly amateur artists with a vision and access to the right gear. A little money behind it, obviously, but nothing huge. Nothing like what would have been needed 10-15 years ago to get something of this quality.

Jake: I'll check that out.

We totally agree on QUIK: While it might not have been made by a true amateur with a single camera, a Mac, a truck and some gas, it easily could have been (which sounds like a backhanded compliment, but I don't mean it that way).