In the Shadow of Giants: Elway to Marino 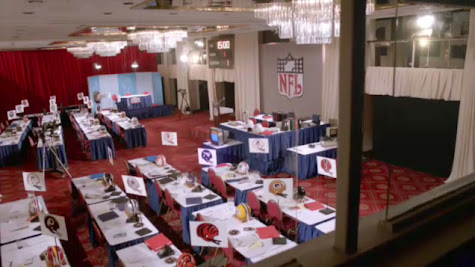 The 1983 NFL Draft produced more great quarterbacks than any other before or since. And that was just the first round. Six quarterbacks were taken in the first 27 picks that year, including two who would become among the top five (or so) ever to play the position, one who would play in four Super Bowls, two who would be fairly average and, not to be forgotten, a guy named Ken O'Brien who would flash enough brilliance to be named to two Pro Bowls but remain forever overshadowed by guys in his draft class named John Elway, Dan Marino and Jim Kelly. Elway to Marino, the latest entry in the ESPN Films "30 for 30" series, is fixated, no surprise, on the guys at the top. But in a documentary collection that has produced great films like June 17, 1994, The Two Escobars and Catching Hell, Elway to Marino is nothing more than a Ken O'Brien.

That's nothing to be ashamed of, but it's not much to cling to either. Director Ken Rodgers retells the events of the draft clearly and evocatively through talking-head interviews and archival footage, even going as far as to recreate the banquet room where then-NFL Commissioner Pete Rozelle announced the picks under a gaudy chandelier. But drafts are only so interesting, particularly in retrospect — even drafts in which the consensus best talent available, Elway, used a potential Major League Baseball career as leverage to avoid signing with the Baltimore Colts, which had the top pick that year. And for all the ways Elway's draft experience was unusual, Marino's is actually typical. Sure, his eventual professional output suggests he should have been selected a lot sooner than 27th. But it wasn't all that long ago that NFL MVP quarterback Aaron Rodgers fell to the 25th pick in 2005, suffering all the while in the green room. And all-time legends Joe Montana and Tom Brady didn't get picked until the third and sixth rounds, respectively. So this stuff happens.

Ken Rodgers does his best to make the 1983 draft seem extraordinary, but it isn't really. That year, like any year, some guys were picked where they should have been, and other guys weren't. Some guys began productive NFL careers, and other guys got one step closer to unemployment. Some picks generated applause, and Jets picks inspired boos. So it was, and so it always will be. Which means that if you've seen any NFL draft, you'll feel like you've seen this one — and reliving Rozelle's introductions doesn't create quite the same nostalgic electricity as an actual classic game. Making matters worse, the "30 for 30" series has already produced a pair of films covering the same general time frame and even some of the same tangential stories, The Band That Wouldn't Die and Small Potatoes: Who Killed the USFL?, which leaves the perfectly capable Elway to Marino unfairly covered in the stink of been there, done that.

Thus the pleasures of this documentary aren't provided by its narrative but by its trappings. The 1983 draft room, for example, is, in retrospect, awesomely modest. No players taking the stage to pose with the jersey of their new team — in fact not much of a stage to take; just a podium on a small, slightly elevated platform where Rozelle announced each pick. No glitzy ESPN production with Chris Berman's voice booming off the slick-back hairdo of Mel Kiper Jr.; just three guys sitting in typical banquet room chairs at a table with typical banquet room skirting looking like something out of a Ron Burgundy movie. No huge Radio City Music Hall crowd to react to each pick; just a hundred or so fans looking on from the balcony of the New York Sheraton ballroom.

One of those fans looks like a mini-Andy Reid, with a bright red mustache and ample chest hair protruding from the open neckline of his striped ketchup-and-mustard colored shirt, presumably from the Ronald McDonald Collection. The first time we glimpse this super-fan, he's standing with his buddies, dutifully scribbling notes like a Trekkie trying to transcribe William Shatner's keynote address at an annual Star Trek convention. It's an image that's simultaneously sweet and hilarious, and it's enough to make you reach for the pause button. Thankfully, Rodgers knows it. Because soon enough the super-fan is back, being interviewed on his own, looking appropriately puzzled by the Jets' selection of O'Brien from far off U.C. Davis, and getting no help from the interviewer who mistakenly refers to the new New York quarterback as "Ken Davis." That moment alone makes Elway to Marino worth watching.

Too much of the rest, like most NFL drafts, feels like much ado about nothing. Elway to Marino closes with the suggestion that the 1983 draft, which provided days of curiosity about how the Colts would handle Elway's preemptive holdout, sparked what is now an annual ritual of hype and excess. And that might be true, and certainly that would have been a more appropriate entryway to this story. But instead Elway to Marino, which is sorely lacking the directorial fascination of so many other entries in the "30 for 30" series, tries to position the events of April 26, 1983, as one of those "you never forget where you were when ..." sorts of historic moments, and, like so many draft picks, it fails to live up to those unfairly lofty expectations.

If every draft disappointment has a retroactive tell, a detail that in hindsight makes one wonder how the erring team didn't see it coming, Elway to Marino's tell is its fascination with the journals of Marvin Demoff, the agent of both titular quarterbacks. "Demoff had a plan, and he would record each step of it in a diary that until now has never been made public," narrates Tom Selleck early in the film, sounding more like John Facenda than any Magnum P.I. watcher could have imagined in 1983. Yes, Demoff's detailed notes provide a specific timeline that lends the documentary an air of authenticity. But on closer inspection, the diary doesn't do anything more than corroborate what Rodgers uncovers in archival footage and interviews. It's a reminder that if the worst phrase in nonfiction reporting is "We don't want to speculate, but ..." the second worst might be anything along the lines of "never before seen." Tantalizing as those words sound, more often than not they indicate someone is trying to convince us that what doesn't seem interesting actually is, purely by virtue of its uncovering. What's uncovered in Elway to Marino produces a solid, professional achievement worthy of pride. Of course, you might use the same words to describe the less than unforgettable career of Ken Davis. I mean, O'Brien.

Elway to Marino premieres tonight on ESPN at 8 pm ET, and will rerun frequently thereafter. The Cooler hopes to review each new film in the "30 for 30" series upon its release. See the Volume 1 and Volume 2 archive.
Posted by Jason Bellamy at 9:10 AM

I remember Elway's petulance, and had completely forgotten about Ken O'Brien, much less that he had a couple of good years. But, yeah, it wasn't like "A Draft To Remember."

Dude! As a WSU alum, I can promise you that Malick would love the rolling hills of the Palouse!

And while Leaf's imprisonment might make it hard for Malick to shoot him spinning through the wheat fields, that's no big deal: I'm sure Terry would end up cutting him from the movie anyway.

He'll plant a wheat field in the prison yard. The Malickians will hail it a blindingly beautiful metaphor.