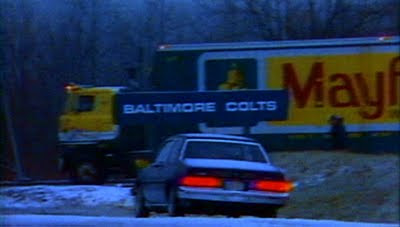 There are a number of clever elements within Diner that help make it a classic, but nothing is more singular to the 1982 comedy than its famous football quiz. The premise alone is hilarious: Steve Guttenberg’s Eddie is to give his fiancée a football exam – multiple choice, true/false and short answer – that she must pass in order for him to go through with their wedding. Dramatically speaking, the principal intent of the quiz is to underline Eddie’s immaturity and his genuine fear of the opposite sex. Yet the true genius of the quiz isn’t what it tells us about Eddie but what it tells us about Diner’s setting: Baltimore circa 1959. It’s important to note and yet easy to overlook that while Eddie’s friends question whether their pal would actually call off the wedding, they aren’t the least bit fazed by the quiz in general or the ultimatum attached to it. Neither are the parents of the bride and groom, but then how could they be, given that the wedding is set to take place at a church festooned in the blue and white of the Baltimore Colts, with the bride walking down the aisle to the Colts fight song? Eddie’s football obsession might seem like farce, but Diner plays it mostly straight, because in 1959 there was no love greater than that of the people of Baltimore for their Colts.

If Barry Levinson didn’t make that clear with Diner, the director makes it impossible to miss with a new documentary, The Band That Wouldn’t Die. Specifically the story of how the Baltimore Colts marching band refused to disband after the franchise was shipped out of town under the cover of night back in 1983, The Band That Wouldn’t Die is more broadly about the relationship between a city and its team. Levinson’s documentary is the second release of ESPN Films’ “30 for 30” series, and it’s the perfect follow-up to Kings Ransom, which in remembering the trade of Wayne Gretzky from the Edmonton Oilers to the Los Angeles Kings profiles a similar heartbreaking exodus. But where Peter Berg’s film is told through the experiences of the famous (Gretzky) and infamous (Oilers owner Peter Pocklington), Levinson’s abandonment story is told by the little people (the fans) who on December 18, 1983, watched helplessly as moving trucks shipped everything belonging to the Colts to the team’s new home in Indianapolis. Well, almost everything.

By pure luck, the band uniforms got left behind; they were at the cleaners. Quick-thinking band president John Ziemann got to the uniforms before anyone realized they were missing and, with help, smuggled them to a plumber’s workshop, then to his own home and then to a cemetery where the uniforms were stored inside a mausoleum until the wife of Colts owner Robert Irsay negotiated for the band to legally retain them. “We were the band that wouldn’t die,” band vice president Bill Turcan quips in reference to the resurrection from the mausoleum. “The band was saying, ‘We’re not going away until an NFL team comes back.’” And they didn’t. Quite the opposite, actually. They played on, marching in parades and going on the road to other NFL venues. The Colts now belonged to Indianapolis, but the band played as if the Colts had never left Baltimore. They were a band without a team that came to symbolize a city’s unending desire to rally around an NFL franchise.

This cute story that first seems like a colorful anecdote turns out to be the crux of Levinson’s film, often for richer but sometimes for poorer. By the end of the documentary there’s no question that the Baltimore Colts marching band made a difference. If nothing else, they helped rally support when a new stadium needed to be built in order to lure the NFL back to town in the mid-1990s. As former gubernatorial press secretary Bob Douglas suggests, the band proved what an NFL team would mean to Baltimore in the present by reminding people what the Colts meant to the city in the past – a past that extends back to the NFL Championship teams of Johnny Unitas. The Colts fight song “reaches deep,” Douglas says, and he gets emotional just thinking about it. He isn’t the only one. Just about everyone interviewed in this picture seems to get choked up talking about the significance of the Colts band and the team's battle hymn. And as touching as that is, it’s also a little strange. As the documentary rolls past its halfway point it’s hard to keep from getting cynical: “All this over a fight song? Really?”

That’s the problem with The Band That Wouldn’t Die. The story of a relationship between a community and its team has universal appeal, but after a while Levinson’s picture is perhaps too personal. Too much about the Baltimore Colts. Much too much about its band. Ziemann is a passionate man without a hint of genuine arrogance, but there are only so many times a guy can gush about the importance of his marching band and his herculean efforts to keep it together before he seems to take himself too seriously. Even if you come away convinced that without the band Baltimore might not have been able to build a stadium worthy of landing the Ravens (formerly the Cleveland Browns; how’s that for irony), in the end the band is just a band. If it disappeared tomorrow it’s hard to imagine many people crying about it 25 years later, though Levinson finds several Colts fans who can’t watch the footage of moving trucks rolling out of Baltimore in 1983 without spilling tears. These old-timers might have the Ravens to cheer for now, but their agony over losing the Colts is still fresh. One fan says it was like losing his best friend. Another compares it to a divorce, saying that when he first saw the Indianapolis version of the Colts on TV it was like seeing his ex-wife with another man. “You couldn’t quite watch,” he says. “It hurt too much.”

This pain turns out to be more compelling than the triumph of the band, and in that sense Levinson’s film withers as it unfolds. And yet The Band That Wouldn’t Die goes down as a terrific companion piece to Diner. Levinson’s 1982 ode to his childhood home was in theaters well before the Colts left for Indianapolis, and that’s significant because it demonstrates that Diner's football subplot wasn’t created as a tribute to a departed team but as a monument to an era when there was no better place to love professional football than Baltimore. Levinson makes no direct reference to Diner in his “30 for 30” feature, but he doesn’t need to. His name and casual presence within this documentary provide connection enough. Thus it came to be that while watching The Band That Wouldn’t Die I couldn’t help but imagine how Guttenberg’s Eddie would have felt seeing the Colts leave town and how poignant the team’s fight song would have been for him forever after. Eddie would have cried at the sound of it, I'm sure, just like the rest of them.


The Band That Wouldn't Die premieres tonight on ESPN at 8 pm ET, and will rerun frequently thereafter. The Cooler will be reviewing each film in the “30 for 30” series upon its release.
Posted by Jason Bellamy at 12:10 AM

Are you really reviewing every one of these films? This will be fascinating. I need to check back on your review of KR.

I knew nothing about this story and to be honest it doesn't sound like required viewing, but I can appreciate stories about sports teams and their cities (Minneapolis being the site of a few abandoning teams - the Lakers and North Stars, for example).

Anyway what struck me most while reading this was just one thought: NFL teams used to have marching bands?

I was born in Cincinnati, and as a lifelong Bengals fan, I live in fear that someone will take my perennially terrible, momentarily relevant team away from me in this fashion.

Daniel- I live in New Orleans as a kid for a few years in the early 1980s and, at my first Saints game, my father bought me a wall pennant celebrating the glory of their band, instead of anything related to the team itself.

Daniel: Yep, that's the plan. And, no, I wouldn't put this documentary on the "required" viewing list, unless you're like me and you're curious to see what kind of patchwork these docs create as a whole. Of the two so far, Kings Ransom is more compelling start to finish.

Chase: I'll be interested to hear what you think about the film. It's honest about the fact that the Ravens broke the hearts of Browns fans in leaving Cleveland for Baltimore, but it's sure an awkward element that makes it hard to feel like the Ravens are a total victory for the city.

On a personal note, I'm a San Francisco Giants fan, and for a while the team was on its way to St. Petersburg, of all places. I don't remember all the logistics of how that ended up not happening, but I'm thankful they stayed in San Francisco, even though (a) I've never lived in San Fran with them and (though I've seen them there oodles of times) and (b) I'm nowhere close to San Fran now.

If you’re in a school band - marching band, concert band, jazz band or even rock band, you have to check out the new Rhett & Link School Band Rap video.
http://www.youtube.com/watch?v=1CTDEteVMIA&feature=PlayList&p=F46A2A099A1F7398&playnext=1&playnext_from=PL&index=61

Agreed 100% with you on this one. It's an interesting premise (and again, I love learning more about these sports stories that I was too young to fully understand when they initially went down), but I found myself thinking "really, all this over a marching band?" somewhere in the middle. The heartbreak of losing a team is what I felt more than anything. The rally around the band aspect does nothing for me.

Also, I've always wondered how Baltimore fans felt about taking the Browns away from Cleveland, so it was nice to hear that for them it was a bittersweet kind of victory. Fortunately, in the end, it worked out for both sides (although Baltimore got the Super Bowl and Cleveland has been pretty much a doormat).

I should say that it was all worth it just to see footage of the inebriated Robert Irsay's press conference. Catching that kind of stuff on film is always fascinating.

Troy: I meant to mention the Irsay drunken interview and then when I finished my review I realized I never touched on it. It's truly fascinating! And sad.

Nice story as for me. It would be great to read more about that topic.
By the way look at the design I've made myself Companionship in London

Nice story as for me. I'd like to read a bit more about that topic. The only thing I would like to see on that blog is some photos of some gizmos.
Kate Karver
Cell phone jammer

I read an article in 1982 that said that people used to celebrate buying cheap viagra when they watch a game.

Great story you public here.
It will be intresting to read anything more concerning this article.
Thanks for giving that information.
With best regards Anna
Kiev escort

I am very enjoyed for this site. Its an informative topic. It help me very much to solve some problems. Its opportunity are so fantastic and working style so speedy. I think it may be help all of you. Thanks a lot for enjoying this beauty article with me. I am appreciating it very much! Looking forward to another great article. Good luck to the author! all the best!