An American Tragedy: The Legend of Jimmy the Greek 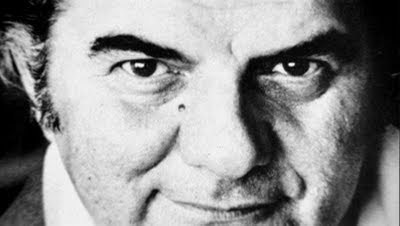 When I watched Dan Rather refer to Jimmy “The Greek” Snyder as “an American tragedy” in the first few minutes of the latest documentary in ESPN Films’ “30 for 30” series, I couldn’t help but roll my eyes. Rather’s assessment struck me as the kind of hyperbole that career on-camera interviewers – who know what makes for good TV – have a tendency to spew when they’re answering the questions instead of asking them. But by the end of The Legend of Jimmy the Greek, I was stunned to find myself nodding in agreement. If like me you remember Jimmy the Greek for the manner in which he became infamous, Fritz Mitchell’s film will reawaken you to the days in which “The Greek” was merely famous. Furthermore, it will enlighten you about an even earlier time, when Jimmy the Greek was just Demetrious Synodinos of Steubenville, Ohio. On paper this profile of a gambler turned TV personality turned outcast might appear to be the least compelling of the six “30 for 30” pictures released thus far. On screen, however, it’s the most complete film yet.

That’s fitting, really, because Jimmy the Greek loved an underdog, and underdogs live to surpass expectations. Thirteen years removed from his death, Jimmy the Greek is largely remembered today, if he’s remembered at all, for the insensitive comments about black athletes that got him fired from CBS more than two decades ago – a thick shadow of controversy that “The Greek” shaped with his own hands. Mitchell’s film doesn’t shy away from that controversy, but it also cuts through the fog, and what it finds is fascinating: I knew that Jimmy the Greek was a gambler, but I didn’t know the story of how he became one, at the age of 13. I knew that Jimmy the Greek was a colorful TV personality, but I didn’t know how hard he worked to get on the air in the first place (as with John Madden, his cartoonishness could distract from his legitimate credentials). I knew that Jimmy the Greek’s career ended sadly, but I didn’t know that his life had been touched by catastrophe long before that – as a parent who lost three children and as a child who lost a parent. This won’t be news for everyone, of course, but I suspect that even those familiar with this background will find it feels like new. In Mitchell’s film, Jimmy the Greek’s spirit is tangible.

That’s hardly an accident. Mitchell’s boldest gesture is having Greek-American comic Basile narrate anecdotes from Jimmy the Greek’s life in the first person. The tactic effectively invites us to experience the subject’s story through his eyes, rather than absent-mindedly observing it, but the artistic flourish isn’t without problems. First, rather than relying on the kind of straightforward line readings we’ve come to expect from Ken Burns documentaries, Basile delivers a vocal performance that is at once both overdramatic and flat, bearing little resemblance to the man he’s imitating. Second, Basile’s voice-over sometimes accompanies ill-advised reenactments featuring a Jimmy the Greek stand-in clad in a suit and dark glasses who looks more like an extra from Donnie Brasco than Jimmy the Greek himself. Third, Mitchell never makes it clear if Basile is reading Jimmy the Greek’s actual words, perhaps from his unmentioned autobiography, or if the descriptions and accounts are written expressly for the film. Not that it matters much. These are minor annoyances in a documentary that is routinely compelling even before it reaches its tragic conclusion. And it is tragic.

As Mitchell’s documentary makes clear, Jimmy the Greek was already wearing out his welcome at CBS, after 12 years with the network, even before he told a Washington, DC, newsman that “the black is the better athlete to begin with because he was bred that way.” Jimmy the Greek wasn’t trying to be controversial or derogatory or demeaning when he linked the athletic success of black athletes to the slave trade, but – only months removed from similarly offensive statements by Los Angeles Dodgers executive Al Campanis – it sure didn't play that way. It couldn't have helped that, given the impromptu nature of the interview, Jimmy the Greek's remarks had the appearance of being whispered surreptitiously, as if in acknowledgement of their impropriety. In response, CBS fired their analyst and, just as quickly, Jimmy the Greek was shattered. One of the most heartbreaking moments in Mitchell’s film is an all-too-brief clip from a media interview in which a contrite Jimmy the Greek tries to explain his offensive remarks, only to stop, shaking his head, seeming to realize that he’s an inch away from repeating them.

Mitchell covers this controversy and others (a difficult working relationship with Phyllis George, fisticuffs with Brent Musburger, etc.) with a deft touch. The Legend of Jimmy the Greek manages to feel blunt rather than sensational and compassionate rather than absolving. Mitchell’s film is packed with talking heads who are both complementary and critical – including members of Jimmy the Greek’s family. Using a nonlinear approach to cover the ups and downs of its subject’s life, Legend never rushes or lags, and it avoids the usual arc of the tragedy. By the time the documentary ends you might still believe, with good reason, that Jimmy the Greek’s notoriety overshadows his accomplishments. But at least you'll see through the fog. Mitchell’s film makes no attempt to rewrite or reanalyze the final act of Jimmy the Greek’s American tragedy. That would be useless. Instead it simply honors the American dream that came before the fall.


The Legend of Jimmy the Greek premieres tonight on ESPN at 8 pm ET, and will rerun frequently thereafter. The Cooler will be reviewing each film in the “30 for 30” series upon its release. The next "30 for 30" picture won't be released until December 12.
Posted by Jason Bellamy at 12:30 AM

"ill-advised reenactments featuring a Jimmy the Greek stand-in clad in a suit and dark glasses who looks more like an extra from Donnie Brasco than Jimmy the Greek himself."

Heh! This bit made me laugh out loud. Good review! I remember Jimmy the Greek and his predictions. He was a very colorful character as you point out and this sounds like a truly fascinating doc. Can't wait to check it out tonight. Thanks for the heads up.

I was first introduced to Jimmy the Greek on "The Simpson's" when they did a parody of him. I remember wondering why that was funny, and I'm sure my brother had to inform me of who they were satirizing. Sure enough years later I listened to the DVD commentary and they all talk about how huge NFL fans they are, and how Jimmy the Greek was like church for them on Sunday's. You couldn't watch football on Sunday's without first hearing what Jimmy had to say about the games. I wish I was old enough to remember Jimmy the Greek...

I'll return tomorrow with more thoughts (I have this ready to record on the DVR tonight), but I just wanted to say great review and I really look forward to watching this tonight. I'll return with something more substantial tomorrow.

ill-advised reenactments featuring a Jimmy the Greek stand-in clad in a suit and dark glasses who looks more like an extra from Donnie Brasco than Jimmy the Greek himself.

Interesting, as I've always heard this guy's name but knew next to nothing about him.

As it happens I have yet to see one of these docs in its entirety, but I'm sure learning a heck of lot from your reviews - thanks!

Well I must say I remember Jimmy well, as he was on during the years I was a fanatical sports fan. He was much like a dumbed down version of Howard Cosell, who of course was one during the same years. In fact they were to be seen sometimes on the same show. His famed banishment is as well know by most as his television persona. Viewers had a strange respect for Snyder, almost bordering on adulationas in their eyes he represented the inner statistical machinations of the game, having been a publicized bookmaker. It's much the same when Pat Buchanan speaks on political news shows. he must know something more. Peopel expected Snyder to comment on the team's state of mind from week to week. He was colorful for sure, but anything but an intellectual. I'd like to see this too.

Thanks for the comments, everybody. I'll be interested to hear what people think after they've seen it.

Sam: Viewers had a strange respect for Snyder, almost bordering on adulations in their eyes he represented the inner statistical machinations of the game, having been a publicized bookmaker.

Just today I was talking to someone at work who said almost the exact same thing. He noted how whenever his family talked about football, they always wanted to know, "What did Jimmy the Greek say?" They really did adore him. Of course, as the documentary is smart to remind, with fewer options on TV there were fewer people to adore. He was a star.

Hope folks check in after they've had a chance to see the doc.

I quite enjoyed this doc. and at times very riveting stuff. The DONNIE BRASCO re-enactments didn't bother me all that much but that may be because your review kinda warned me ahead of time. At times, those bits almost seemed liked outtakes from CASINO?! Weird.

This was very well done and really showed how tragic Jimmy's life was at the end, there. Damn shame. But watching this sure brought back memories of catching him and Musberger every Sunday. I had forgotten just how popular that show and Jimmy was back in the day. It's scary to think how few sports shows there were back then and now they're all over the place.

Thanks very much for that Jason. OK, I couldn't manage this premiere, but am relying on an upcoming repeat on ESPN. Glad to read what J.D. says there.

J.D.: Casino is probably a better call than Donnie Brasco. Yeah, I didn't find those scenes too bothersome, but it was still kind of goofy. I'm just not sure anything was really gained by it. The voice-overs, yes. The re-enactments, no.

Sam: The good news about ESPN is that repeats are easy to find. Plus, there's only one more "30 for 30" between now and March, and that's in December. I'm guessing "30 for 30" reruns will be everywhere over the holidays.

These things seem to be suffering from the one-hour time frame- feels like there's more story here than a generous what, 54 mnutes, can contain. I did really like that this installment didn't focus on the incident, which we all know about, but on the man as a whole. I didn't mind the Casino shots, btw, as I wasn't sure what else they were supposed to do. I will say that the 30 for 30 podcast with Brent Musberger works really well as a companion piece to this doc. Brent is one of those media personalities that I'd always taken for granted, as he'd always been at the epicenter of the sporting events that I grew up watching, but I haven't given him enough credit for being a compelling storyteller in his own right.

It is very interesting to read his biography, he really was a man who gambled almost with anything.

Poor jimmy he was a good person who didn't deserve this kind punishment!

why all the bad things happens to good people? poor Jimmy, I hope this have a good end for you, be well my bro, and don't worry, everything is gonna be all right.