Beyond the Game: The Two Escobars 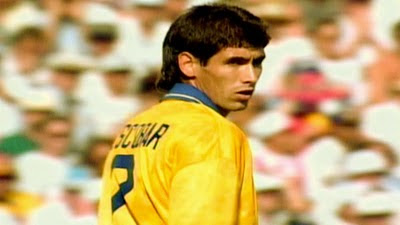 If one of the things that June 17, 1994 reminded us is that we can’t watch professional athletes on the playing field and know what kind of people they are, The Two Escobars offers the equally important reminder that no amount of media coverage can provide us with a clear understanding of what these athletes are going through. The latest release in ESPN Films’ “30 for 30” series opens with shots of the Colombian soccer team looking less than enthusiastic as they walk onto the pitch in front of a passionate capacity crowd at the Rose Bowl for a crucial match against the United States in the 1994 World Cup. To most, the Colombians look as if they’re feeling the pressure of having been upset by Romania in their opening game, and they are. They also look as if they’re suffering an unfamiliar lack of confidence, and that’s probably right, too. But there’s something else there, something that’s more difficult to detect because it’s not something most of us expect to find at a soccer game. That something else is fear, real fear – the fear of losing something much more significant than a game. To spot that fear, you have to be able to crawl inside the minds of the Colombian players, to understand where they come from, what they’re playing for and what they stand to lose. To see that fear, you have to see beyond sports. That’s what The Two Escobars does so well.

Directed by Jeff and Michael Zimbalist, The Two Escobars is less a sports documentary than a gritty South American crime saga. It’s The Godfather by way of Che Guevara as written by Tom Clancy and adapted for the screen by David Simon. It’s packed with assassinations, government corruption, drug trafficking, money laundering, militia wars, kidnapping and terrorism. There’s enough here for a miniseries. Instead it’s a taut 100-minute powerhouse overflowing with so much compelling archival footage that you figure the Zimbalists grew up clipping newspaper articles and storing them in shoeboxes underneath their beds, just waiting for their chance to tell this story. The impressive density and complexity of The Two Escobars is occasionally overwhelming, particularly in the early going when we’re assaulted with overlapping narrative voices (in Spanish, with English subtitles) that have a habit of referring to names we’re still trying to associate with faces. But the longer we watch, the more it makes sense, both logically and emotionally. Watching this film is a little like staring at Picasso’s Guernica: The whole is impossible to comprehend at once, so instead we understand it in pieces until the big picture paints itself in our minds as some kind of subconscious panorama that we could never quite describe in words.

The Escobars of the film’s title are Andres, the standout sweeper and national-team captain, and Pablo, the billionaire head of the Medellin cartel. Unlike the Zimbalists, these men were unrelated. But that doesn’t mean they weren’t linked. Andres was a star on the club soccer team owned by Pablo – the very team Pablo used as a front to launder millions he earned from his cocaine enterprise, and the team that Pablo made more successful than it otherwise would have been by bribing and threatening referees, and sometimes backing up those threats. When Pablo was on the run from the Colombian government, he carried a radio so that he could listen to the on-field feats of Andres and the rest of the national team. When Pablo was cozily behind bars at a prison he’d constructed, Andres was among the professional soccer players invited to come inside the gates to play exhibitions for their No. 1 fan. It was Pablo who paid for the soccer fields in poorer-than-poor neighborhoods. It was Pablo who made the drug-funded sport – “Narco-soccer,” they called it – such a lucrative endeavor in that impoverished country that Andres and his fellow Colombians developed into one of the best soccer squads in the world. It was Pablo who helped create Colombia’s worldwide reputation for drugs, murder and terrorism, which Andres and his teammates felt could only be rewritten by a shining performance on the World Cup stage. And when Andres was murdered a few days after scoring a tragic own-goal that eliminated his team from the World Cup, it was Pablo who entered people’s minds – some blaming him for fostering the criminal underworld responsible for Andres’ death, others professing that if soccer-fan Pablo had still been alive, Andres would have been, too.

To call Pablo Escobar a fascinating figure is to sell him short. He was the kingpin of a ruthless army of organized crime, which should have made him universally detestable, but he wasn’t. To many in Colombia he was a savior, a real-life Robin Hood, not because he won minds, convincing impoverished Colombians that their government was corrupt and needed to be overthrown, but because he did things the government couldn’t afford to do. For people who had been living in a garbage dump, he built homes. For communities with nothing, he gave them soccer fields and equipment. While he threatened those in Colombia who had, he gave to those who had not. They loved him for it. The Zimbalists document this creepy goodwill with the same clarity they apply to the carnage and destruction that resulted from Pablo’s wrath. It helps that several of Pablo’s close associates who are interviewed in this picture are just as detailed when describing Pablo’s calculated generosity as when describing his viciousness. But it’s the images that tell the story. Footage of assaults, shootings, explosions and corpses burn into the mind. This is the most graphic film in the “30 for 30” series thus far, and it will remain that way. Its gruesomeness is tough to top.

That’s why what I’m about to say feels so strange: In stretches, The Two Escobars is magnificently beautiful, too. If you’ve ever doubted the allure of soccer, you won’t after seeing highlights of the Colombian team (accompanied by Michael Furjanic’s lively score), which provide a welcome respite from the violence and corruption. Here, the documentary again transcends sports, because what these men do with a soccer ball is something higher than athleticism – it’s art. Dazzling. Breathtaking. Joyous. And, because we know the tragic conclusion, it’s also poignant. The Two Escobars is the perfect companion piece for The 16th Man, creating a “30 for 30” double-bill about teams attempting to bring unity to their homelands through sport – one team favored but doomed, the other overlooked but ultimately triumphant. To watch The 16th Man and see the Springboks rugby team of South Africa, or to think of Jackie Robinson here in America, is to be grateful for those times when sports themselves are transcendent, leading us toward a peace we couldn’t find any other way. And yet to see Andres Escobar’s face before that 1994 World Cup game, and after his own-goal, and after the loss to the U.S. and, in a grisly coroner’s photo, after his murder, is to know this: Sometimes it’s best when it's just a game.


The Two Escobars premieres tonight on ESPN at 9 pm ET, and will rerun frequently thereafter. The Cooler will be reviewing each film in the “30 for 30” series upon its release. See the archive.
Posted by Jason Bellamy at 5:15 AM

Awesome. As a big soccer fan I am eagerly anticipating this one. Can't wait to check it out tonight. Thanks for another excellent review!

I also wanted to add that I just bestowed the Versatile Blogger Award for all the great work you do on your blog:

Thanks, JD. On both counts.

Be sure to weigh in with your thoughts on the doc tomorrow. Happy viewing!

I am grateful for this episode of 30 For 30! My first one, too! Pop culture has made Pablo a household name but I was completely unaware of "the other Escobar" as well as this aspect of the Medellin cartel.
I was glued to the T.V.

Thanks for this review.

That was an amazing documentary. So much to think about.

At one point one of the interviewers says "Soccer is not an island." The same can be said about sports in general, and the 30 for 30 series is hammering that point home every time. The American sports media spoon feeds the public maybe 5% of what's really going on - this city has been a real eye-opener, and I know I'll never look at sports the same way again.

And those soccer highlights were just brilliant.

Wow, this was a fantastic doc! As someone else said, I was glued to the TV for the entire running time. The filmmaker really painted a fascinating picture of how the drug cartels intersected with soccer back in those days and just how bad things got. It really is incredible to see just how crazy things got there and the aftermath (like how far Colombia fell in international soccer rankings after all this went down). Incredibly tragic story but one definitely worth telling. This might be my fave of the series.

Haven't seen "Two Escobars" yet, but this is a superbly written piece. I will try to check it out.

where can i find this doc on the internet?

Thanks for the additional thoughts, everyone. Some belated replies ...

DialecticSoup: "Glued to the TV" is right on. About halfway through watching it, I found myself leaning forward on my couch. Engrossing.

Clarence: The other quote I like, which might directly follow yours, is the suggestion that the drug trade was an octopus, touching everything. Indeed, in this case it really did seem to touch everything. What a fascinating and terrifying world!

JD: The Pablo-aftermath stuff made me think of Iraq post-Saddam ... In the short term, the ensuing chaos is a step backward. And that "short term" can last the majority of a life time, or longer. And yet, morally speaking, it's a step forward, a necessary step. I keep using this word, but I'm so fascinated by a place like the Colombia depicted in this film -- a place where the killing of the most evil force in the country makes that country less safe, at least for a time.

Anon: I'm not sure if it's streaming anywhere, but if you're willing to pay, I believe this is one of the "30 for 30" docs that's already available on DVD via Amazon.

Beyond the Game: The Two Escobars ?

First off, great blog. Really enjoyable reading! I can't say enough about The Two Escobars. What a moving film about how lives intersect. Even knowing how the documentary was going to end, I still found myself riveted throughout. There was so much hope attached to this soccer team and this incredible young man. To see it all come crashing down was simply heartbreaking.

Scott: Thanks for the kind words. I appreciate it.

"Even knowing how the documentary was going to end, I still found myself riveted throughout."

In principle, a good happen, support the views of the author