Running Down a Dream: Into the Wind 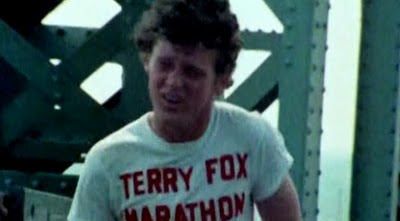 As if sports weren’t inherently dramatic enough, the language we use when discussing them is often bloody with consequence. Teams facing elimination from the playoffs are said to be in “do or die” situations. NFL games that are tied after four quarters go into “sudden death” overtime. And fans who allow their happiness be dictated by the success of their favorite team are said to be “diehards.” It’s all overstatement, provided that no one has made a bet they can’t afford to lose, but it’s harmless. (Working in the NFL when the United States invaded Iraq in 2003, I was puzzled by the insistence of some writers that it was now inappropriate to refer to a team’s draft-day strategy room as the “war room.” Were these people similarly uncomfortable with the football terms “blitz” and “gunner”? And, in our post-9/11 climate, where was the objection to the baseball terms “sacrifice fly” and “suicide squeeze”? But I digress.) Poetic enhancement is a sports tradition. Still, every now and then something comes along and reminds us of just how foolish these inflated terms really are, and of just how dramatic sports can be on their own. Into the Wind is that kind of reality check.

The first must-see entry in ESPN Films’ “30 for 30” documentary series since The Two Escobars debuted in June, Into the Wind tells the story of Terry Fox, who in 1980 set out to do the unthinkable: run all the way across his native Canada at a rate of approximately 26 miles (one marathon) each day. A formidable task in its own right, Fox’s expedition was made all the more challenging because he was without the better part of his right leg, which had been amputated six inches above the knee three years earlier, after Fox had been diagnosed with bone cancer. Fox’s goal wasn’t just to cover the distance but to raise money for cancer research and to raise the spirits of cancer patients at the same time. He called his run the “Marathon of Hope,” and in doing so he not only grossly undersold the length of his journey but also the emotions it would stir in those who witnessed it. Directed by NBA guard (and fellow Canadian) Steve Nash and Ezra Holland, Into the Wind gracefully combines modern interviews, archival footage and narrated excerpts from Fox’s journal to bring to life the heroic quest of a 21-year-old man who in the true spirit of sports wanted to test himself, and who in the true spirit of life wanted to do before he died.

It won’t surprise you to hear that Into the Wind is a severely emotional film. When you’re dealing with a young, handsome cancer victim and the choked-up memories of his friends and family, it’s a good idea to have a box of Kleenex handy. And yet while viewer experiences may vary, I found the primary emotion of the documentary to be, of all things, joy. Bittersweet joy, yes. But joy just the same. The image of Fox running alone down various Canadian roads, continuously swinging his clumsy prosthesis underneath him in an athletic but awkward rhythm, is moving beyond words. Because each stride is such a struggle, every step feels like a triumph. And with Fox running a marathon a day, that makes for a lot of triumph. At least, that’s how I look at it. That’s how I explain the lump in my throat that developed less than five minutes into the movie that was still there more than an hour after it was over. Fox on the run is a lurching portrait of all the things that we hope to find in our greatest champions: determination, perseverance, persistence, courage and passion. No wonder Canadians fell in love with him, lining roadsides to cheer him as he passed by or packing town squares to hear him speak during mid-day rests. Sure, they were drawn by the Herculean nature of Fox’s physical task, the difficulty of which was exacerbated by what he didn’t have: a right leg. But I suspect that even more they were drawn to Fox because of what he had so much of: spirit, bravery and toughness. It’s as if with each deliberate step, Fox’s heart beat for everyone to hear.

Miraculously, that sound didn’t carry beyond the Canadian border, not in any lasting way, at least. Given our country’s love of underdogs and running, it’s unthinkable that we don’t know Fox’s story by heart, perhaps with an assist from a Hollywood movie (which must be coming now; bank on it). And yet one of the things Into the Wind makes clear is just how difficult it was for Fox to be discovered in the first place. His legacy includes a statue in his honor, and his run ended with front-page headlines across Canada, but the “Marathon of Hope” began in near anonymity; the only reason there’s footage of Fox’s first steps is because he and his best friend, who drove the van in which the two would sleep along the way, begged a TV station to come out and film Fox on their day off. In the early stages of his journey, Fox would run to and through towns that had no idea he was coming and no clue he had left. It was a much different world. Today, someone like Fox could get his own reality show – presuming one doesn’t already exist for one-legged, cancer-stricken, cross-country runners – and if that didn’t work out, he could document his own journey on YouTube and spread the word via Twitter. Social media could have immediately provided Fox with the kind of exposure that he would only enjoy later on, when the Canadian Cancer Society stepped in to promote and manage his arrivals and appearances (for better and sometimes worse).

But having said that, I suspect that Fox’s run happened at just the right time. Because while the tools for self-promotion are more plentiful today, so is the amount of noise and cynicism. It’s worth wondering: If Fox made his run in the Facebook era, would he have enjoyed greater success, or would people simply have “liked” his run instead of donating to it, “friended” him instead of emotionally connecting with him? Would we have been moved by his courage, by his willingness to carry the hopes and dreams of others on his shoulders, or would we have doubted his sincerity, questioning whether his cause was nothing more than an act of self-glorification? The purity of Fox’s run is a huge part of what makes it so powerful: he’s a guy wearing Adidas shoes, shorts and T-shirts with iron-on lettering who is just running. It’s an act that needs no further enhancement. Its tone is nostalgically earnest. I have deliberately avoided mentioning exactly how Fox’s run ended, because that's beside the point. What’s so emotionally overwhelming isn’t how far Fox ran – though I'm sure your jaw will drop when you see the final statistics – it’s how often he got back out on the road and how he fought for every step. Fox’s run wasn’t about “do or die,” it was about do. That’s what made it so beautiful. Into the Wind allows us to feel the struggle of every step and to revel in the glory of its completion.


Into the Wind premieres tonight on ESPN at 8 pm ET, and will rerun frequently thereafter. The Cooler will be reviewing each film in the “30 for 30” series upon its release. See the archive.
Posted by Jason Bellamy at 5:57 AM

As a Canadian who grew up during the time he did his run I remember vividly this happening and the national coverage it eventually garnered. Amazing stuff. I am really looking forward to watching as I'm sure it will bring back the memories of that time.

There was a film, The Terry Fox Story, with Robert Duvall (not playing Terry), in the early '80s. Not that many saw it.

Fox's goal was originally to raise $1 for every Canadian for cancer research. The annual Terry Fox charity runs held by most schools and communities across Canada have exceeded that goal many times over. Cancer treatments around the world are better today because of him. And he is known in Europe and elsewhere, if not in the U.S.

There was at least one other film, too, in 2005, which starred Shawn Ashmore (aka Iceman from the X-Men movies) as Terry Fox.

Both of these films were produced for TV, though, so it doesn't look like Terry has ever received the full-fledged dramatized big-screen treatment.

Thanks for the comments, all. Sorry for the delayed reply.

* J.D. Would be interested to hear your perspective after you see it.

* Derek and Peter: Thanks for the notes on the TV movies. I've got to think that the three reasons that Hollywood hasn't given it the big screen treatment is because (1) having a main character with one leg presents a technical challenge or eliminates the ability to case a big-name actor (but rampant CGI should make that a nonissue now); (2) it happened in Canada; (3) it's a sad ending -- though I see it as pretty fucking triumphant. Still, Hollywood loves to ripoff proven ideas, and this documentary shows that a big screen drama could be tremendously moving. (Oh, how I hope Clint Eastwood doesn't direct it, because then it would be so sentimental I'd gag.)