The Curse: Four Days In October 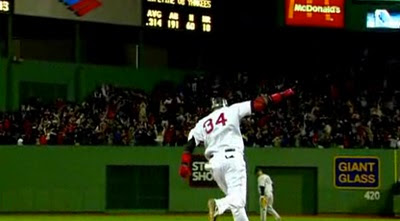 One frame. While watching Four Days in October, the latest entry in ESPN Films’ “30 for 30” documentary series, that’s how far I got before I rolled my eyes. The trigger for my annoyance was a pair of words that flashed up on the screen in blood red: “The Curse.” No, this isn’t a film about menstruation. It’s about the 2004 American League Championship Series. Which of course means that “The Curse” refers to “The Curse of the Bambino,” which of course refers to the sale of Babe Ruth by the Boston Red Sox to the New York Yankees prior to the 1920 season, the sacrilege of which was so great that it haunted the Red Sox for decades as they went in doomed pursuit of their first World Series title since 1918. Or so the lore goes. The problem with “The Curse,” and the reason it irritates me, is that it’s utter bullshit – less because it fails to accurately explain why the Red Sox went 86 years without a World Series title than because it creates the illusion that Red Sox fans are an especially tortured lot. Hardly. Yes, in a spring-to-autumn race that produces only one big winner each year, the Red Sox were losers for almost nine decades. But in the meantime they did a hell of a lot of winning. Since 1936, for example, the Red Sox have had only 18 losing seasons. In contrast, last Sunday the Pittsburgh Pirates wrapped up their 18th losing season of the past 18 years. That, sports fans, is the kind of suckitude that truly tortured fan bases are made of.

Having said that, there’s no denying that misery and despair were integral components of a Sawks’ fan’s identity circa 2004, back before the Red Sox vanquished their Yankee rivals en route to becoming the very kind of cocky, big-spending franchise that their fans had so long despised. And so it only makes sense that “The Curse” is mentioned as part of the backdrop of the 2004 ALCS, because if any group of sports fans expected to have their hearts broken in the most excruciating fashion possible, it was the one in Boston (and in many other parts of the country where Red Sox fandom was suddenly chic). In baseball’s long history, only one team has ever come back from a 3-0 deficit to win a seven-game playoff series, and thus Boston’s four straight wins were an incredible feat all on their own. But part of what made the unprecedented comeback such magical theater was its larger context: 86 years without a title; Red Sox vs. Yankees; Fenway Park and Yankee Stadium; the franchise that always lost and the one that always seemed to win. Director Gary Waksman clearly understands the importance of that context, or else he wouldn’t have opened his film with those two annoying words, but because a 50-minute film provides scant opportunity for prologue, that’s about the extent of Waksman’s ability to set the stage, and so he takes it on faith that these teams and their rivalry need no introduction. Furthermore, he takes it for granted that we’ve heard this story before.

It’s an appropriate decision in the first case, but a problematic one in others. Four Days in October has a bizarre habit of feeling like an extended instant replay, unfolding as if we all have a distinct idea of what happened in the 2004 ALCS and thus only wish to see it again from some alternate angles. For Sawks super-fans, who by now have likely watched footage of that series at least a half-dozen times, that’s perfectly okay. But for the rest of us, something is lacking: a clear portrait of the big picture. The film superbly captures moments – Dave Roberts in a crucial pinch-running situation in Game 4 or Curt Schilling taking to the mound with an injured ankle in Game 6 – but it fails to build some simple yet significant context: like establishing the fact that Yankees closer Mariano Rivera, against whom the Red Sox staged several of their comebacks, is the most dominant relief picture in MLB postseason history. Leaving out that detail is like telling the story of the Union victory at Gettysburg without explaining the battle prowess of Robert E. Lee. And the trouble with trusting sports buffs to fill in those gaps is that in doing so we are invited to contrast Waksman’s version of these events with our memories of them, and repeatedly Four Days in October seems small by comparison.

That might have been unavoidable. It’s impossible to capture the long, rich drama of four especially long, especially dramatic baseball games in under an hour. But Waksman doesn’t help matters by giving us something beyond the games themselves as if to justify his presence. Four Days in October is full of curious footage: too many clock shots and scoreboard shots; too many shots of fans in the stands and at bars; and too much footage shot by Red Sox players on their personal video cameras. It’s different way of looking at this historic baseball series, but almost none of this is anywhere near as interesting as the games themselves, nor does it provide a greater context for what happens on the field, with two significant exceptions: (1) at one point we see footage of Schilling’s seriously bruised, surgically treated ankle before it turns into a famously bloody mess; and (2) previous to that we see clubhouse leader Kevin Millar walking up to his teammates before Game 4 and playfully spinning a then preposterous but eventually prophetic fantasy that suggests the Yankees are done for if they don’t finish off the series that night. Those moments are gems. The rest of the time Waksman’s fondness for all this previously unseen footage feels misplaced, akin to a reporter printing the complete transcript of a rare interview with a reclusive figure without realizing that the subject of the interview didn’t say anything interesting. Prior to this film, I’d never seen David “Big Papi” Ortiz dancing with his pants off. I’m still not sure I needed to.

Although context is crucial to the drama of the 2004 ALCS, the series’ heart and soul is the baseball itself. Unfortunately, even then Waksman overcomplicates matters by refusing to provide us with traditional broadcast camera angles – once again trying to reinvent the 2004 ALCS and thus failing to recapture it. It’s thrilling when from a field-level camera angle we get to watch Dave Roberts speed around third and go sliding into home to score the tying run in the bottom of the 9th inning in Game 4, but otherwise most of these shots feel like the cinematic equivalent of a music artist’s messy, half-produced, experimental demos. And that’s a rather fitting comparison actually, because the score for Four Days in October ranges from Clint Eastwood-esque to Gladiator-ish to, wait a minute, is that a fucking pan flute?! Yes, I think it is. It’s as if Waksman is desperate to enhance an already powerful event to make it otherworldly, which given that this all unfolded in what we now know to be the peak of baseball’s steroid era (or close enough to it) is probably fitting. Faults aside, this film will provide a welcome flashback for most baseball fans (Yankees fans excluded, obviously). There’s no denying that these events are worthy of inclusion in the “30 for 30” series. But as Waksman learned the hard way, trying to do them justice in 50 minutes is something of a curse.


Four Days in October premieres tonight on ESPN at 8 pm ET, and will rerun frequently thereafter. The Cooler will be reviewing each film in the “30 for 30” series upon its release. See the archive.
Posted by Jason Bellamy at 5:15 AM

What gets me about "The Curse" is, after the Sox won the Series (the first time), the Yankees beat them in the playoffs (I think) the following year, and some brought up "The Curse" again! Christ, get over it: You could be living in Cleveland.

The White Sox (the eventual champs) swept the Red Sox in the ALDS in 2005.

I still haven't seen this segment yet, but this is the second time in the last week that someone has spoken negatively of episode's music.

Also, as a Cubs fan, I was VERY much looking forward to Alex Gibney's Catching Hell, but apparently ESPN is delaying it until 2011. Argh.