Unbreakable: The Best That Never Was 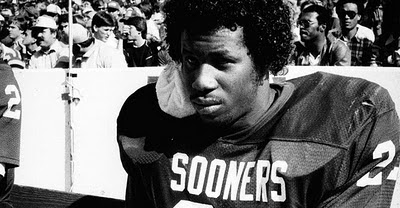 In trying to recount the skill of running back Marcus Dupree, no one minces words. One of his high school teammates says Dupree was “awesome” and could score whenever he wanted, “literally.” A Mississippi newspaper reporter says that watching Dupree running through and around his prep peers was like watching NFL great Jim Brown taking on teenagers. Oklahoma University legend Barry Switzer says that Dupree was the “most gifted player” he ever coached, “bar none.” And Lucious Selmon, who recruited Dupree to Oklahoma, says Dupree was the best athlete he ever saw and had the talent to be the best running back of all time. But of all the effusive assessments we encounter in Jonathan Hock’s documentary The Best That Never Was, the latest edition in ESPN Films’ “30 for 30” series, perhaps the most accurate one is provided by one of Dupree’s childhood friends, who matter-of-factly says, “We suspected he could do anything he wanted to do.” Wrapped up in that seemingly simple statement is the measure of Dupree’s enormous abilities and, ironically, the making of his downfall.

Marcus Dupree’s mixed blessing was that everyone who watched him play came away convinced that he was without limits. That’s why Dupree had his pick of any college in the country when he graduated from his high school in Philadelphia, Mississippi, and it’s also why Dupree’s college football career almost immediately became defined by all he didn’t do and everything he didn’t have. When Dupree set a still-standing Fiesta Bowl record by rushing for 239 yards (on just 17 carries!) in Oklahoma’s losing effort to Arizona State, Switzer didn’t praise his freshman running back, he threw him under the bus, reasoning that if Dupree had been in better shape he could have doubled his carries and doubled his yards and, in doing so, led the Sooners to victory. Dupree had been record-setting great and somehow not great enough. Not for Switzer, anyway, who was so determined to avoid giving Dupree anything he hadn’t earned that he went out of his way not to recognize the dominance that came to Depree so naturally. So it was that Dupree began wondering why the program that was so desperate to sign him in the first place withheld not just praise but also the (illegal) perks that other Sooners players were rumored to be enjoying. Influenced by family and friends who assumed that the football player who could do whatever he wanted on the field should get anything he wanted off of it, Dupree, too, started to judge his college experience according to oversized expectations. And so it came to be that instead of winning a Heisman trophy or leading Oklahoma to a national title, Dupree dropped out of Oklahoma before the end of his sophomore season. A lucrative contract with the USFL soon followed and, alas, just as quickly a devastating knee injury followed that. At the age of 20, Dupree’s football career was pronounced over.

Hock revives Dupree’s impressive and too brief athletic career with clarity and balance, effortlessly blending talking head interviews, archival footage and shots of Dupree revisiting his Philadelphia roots. But The Best That Never Was ranks among the upper echelon of “30 for 30” films not because it reminds us of a player that time has forgot but because it delicately demonstrates how Dupree the person was forgotten within his prime. Here’s a guy who was so sought after coming out of high school that college assistants hunkered down for the long haul in Mississippi hotels while other recruiters bribed Dupree’s teammates with gifts, trying to buy their influence. So intense was the contest for Dupree’s services that Willie Morris wrote a book about it: The Courting of Marcus Dupree. Yet once Dupree became a Sooner, the overwhelming interest that had been paid to him as a senior was gone. No one seemed to realize how unhappy he was, and if so, no one was concerned enough to do anything about it. Dupree was a teenager being treated like a professional, not because he was that mature but because he was that skilled, as if one correlates to the other. Hock allows us to spot this failure without aggressively pointing fingers. To watch this film is to be appalled by what we take for granted: recruiters spending heaps of money in an effort to land players who come from next to nothing; players being asked to live up to their impossible reputations, or else; athletes being coerced by advisors who greedily or foolishly assume that the dominance of an athlete at 18 is a guarantee of what’s to come even two years later. No wonder Dupree felt “burned out” by his sophomore year. He was being handled according to an image of his unrealized endless potential, rather than according to what he was: still just a kid.

So if I tell you that in his brief USFL career Dupree was taken advantage of by a trusted advisor who “invested” his salary in such a way that Dupree’s eventual legal fees eradicated his earnings, or that after his playing days Dupree’s effort to find employment required him to seek out a former Mississippi police officer who had served jail time for his role in the notorious murder of three political activists in 1964, or that now Dupree works as a truck driver, you might suspect that The Best That Never Was is a depressing film. But it isn’t. Because as it turns out, the same guy who failed to achieve the long and unrivaled professional football career that everyone thought was inevitable managed to rehabilitate himself en route to a short and pedestrian professional career that, after his knee injury, even Dupree thought was impossible. All these years later, in a position that would make so many of us feel defined by missed opportunities for glory and material wealth, Dupree stands tall, proud of all that he did achieve – both in his first short career, when everything came easily, and in his even shorter comeback stint with the Los Angeles Rams when Dupree truly earned every carry and every yard through incredible effort.

Dupree’s story compels because it is both unique and universal. No one followed quite the same path, yet so many athletes are stars one moment only to be forgotten the next. As Dupree looks through the dusty trophies on the mantle in his mother’s home, or watches clips his high school highlights, we see not bitterness but joy – a contentment that comes from knowing that he did many things no one else ever could, even if he didn’t do them for as long as people expected. Hock winds down his film with a parade of talking heads making wistful comments about all that Dupree could have been, but they reminisce without seeing all that Dupree is today. As foolish as it would be to ignore the tragedy of Dupree’s football career – from his lack of a strong mentor to all that unrealized promise – it would also be a mistake overlook the beauty of Dupree’s indomitable spirit almost 30 years later. When people watched Dupree play football in his prime, they saw a man who couldn’t be brought down. Apparently they were right.


The Best That Never Was premieres tonight on ESPN at 8 pm ET, and will rerun frequently thereafter. The Cooler will be reviewing each film in the “30 for 30” series upon its release. See the archive.
Posted by Jason Bellamy at 5:25 AM

I remember Dupree. Awesome indeed, and then he disappeared. Now I know why.

The contemporary equivalent to M.D. might be Maurice Clarett from OSU, although he faded due to an entirely different set of circumstances, most of them his fault. He's reportedly back in school, however, and would make a intriguing subject for one of these films himself.

I had a flickering vision, courtesy of your title, that Shyamalan had directed this. That's a relief.

The Shyamalan reference was intentional; to the film, not the director (rest easy). It's an imperfect headline, to be sure, because of course Dupree's legitimate injury ended a playing career he loved. But by the end of the film, I felt as if Dupree, like David Dunn, had earned a different kind of triumph.

I really enjoyed it, and it accomplished in a big way what the "30 for 30" documentary seers set out to do... tell the whole story of events that most of us remember but may not have all the facts.
I am the same age as Marcus Dupree (less three two weeks) and I found the subtext of his story to be fascinating. He played High School ball with the son of the sheriff convicted of killing the three young civil rights workers? Marcus would go to their house? he helped him get a job? Incredible. The whole story about his little brother was fascinating.
What I came away from this is that Marcus Dupree was not a slacker- he has an amazing work ethic- but his career ended mostly because of his own body. If his knee had not given out, he would have had a career similar to Herschel Walker.
I also noted that he is not bitter- he didn't have a bad word for the shiftless "minister" who ripped him off. You kinda wish he would blown the $40,000 check on his buddies instead of giving it to that guy.
This was an incredible edition of "30 for 30"- ESPN is reaching new heights with this series in my book. Maybe they made them just for me...

PS- I have nothing to base this on, but I think the reason the filmmakers held back on including a Steve Bartman documentary is because they started filming and got such good stuff that they may have other plans bigger than the ESPN documentary series... just a theory

Admin: it accomplished in a big way what the "30 for 30" documentary seers set out to do... tell the whole story of events that most of us remember but may not have all the facts.

Well said. This is one of those "30 for 30" films that's richer told today than it would have been if someone tried to make the movie at the time. Part of that is that people seem to feel more comfortable speaking about certain issues. But mainly because we need to be able to see where Dupree ended up (not to imply that he doesn't still have living to do).

As for the Bartman film: It's been pushed back to 2011, apparently because Alex Gibney just wanted more time with it. That'll make that the 31st "30 for 30" film, which has me convinced that Four Days in October, which turns out to have been more of an MLB production than the work of an individual artist, was a rushed throw-in job to take place of Gibney's Bartman movie, which kept getting bumped back in the schedule.

Mak: It's definitely an inspirational story. After watching the Marion Jones movie last week, I was particularly distrusting of Dupree's claims of contentment -- that is, I refused to take them at face value. But if he's lying, well, he sure as heck hides it well. So I'll take him at his word.