Ordinary People: All the President’s Men 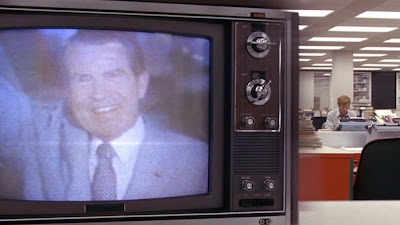 The reporting of Bob Woodward and Carl Bernstein didn’t just halt a presidency, it also helped to create a new American mindset. After Watergate, there was no more pretending that any public office was too lofty to be above crime or that any crime was too lowly for the corrupt to commit. Richard Nixon taught America that even a president could be a common crook (among other things), and the reporting of The Washington Post proved that a free press could be a powerful tool against unscrupulousness. In the years that followed, the government grew less trusting of the press while the press became more emboldened, proudly shining their studded collars as America’s de facto watchdogs. “Watergate,” by which I mean not just the crime itself but also the exposure of its perpetrators and schemers and its resulting ramifications, was a seismic event. Given its impact, one might expect the signature film about this epic “moment” in history to be populated by titans – imposing figures of villainy and heroism. But it isn’t. All the President’s Men is a story of ordinary people. That’s precisely what makes it so powerful.

Released in 1976, not even two full years removed from Nixon’s resignation, Alan J. Pakula’s film isn’t ripped from the headlines so much as it’s spun out of scribbles in reporters’ notebooks. It’s a film about details – details that when viewed alone had little meaning but that once put together rattled the foundation of America’s government. It’s also, of course, a film about the men who unearthed and sequenced those details – men who, if not for circumstance, would have appeared equally unremarkable. Woodward and Bernstein are for the most part household names now, but they weren’t then, and Pakula’s film, based on a screenplay by William Goldman, doesn’t even begin to suggest the incredible fame (by print journalism standards) that awaited them. Played by Robert Redford and Dustin Hoffman, respectively, Woodward and Bernstein are like a pair of terriers biting at the government’s pant legs and following their noses toward they-don’t-know-quite-what. They are tenacious, but also uncertain, and when they have to face the newspaper’s executive editor, Ben Bradlee (a perfectly cast Jason Robards), it’s usually with their tails between their legs. Woodward and Bernstein don’t look or act like the guys who have it all figured out, because they rarely do. And they don’t act like heroes because it never occurs to them that they might be.

The film’s cinematography does wonders to accentuate the anonymity of Woodward and Bernstein, as well as the magnitude of their challenge. Over and over, the reporters are shown in vast spaces surrounded by the chaos of indifference. Memorable is the famous scene at the Library of Congress in which the camera hovers just over the heads of Woodward and Bernstein, as they sift through piles of library checkout cards in search of a clue, and then reverse-zooms toward the ceiling, revealing a reading room bustling with routine activity. Just as effective are several shots of “Woodstein” pulling a car out of the parking structure at The Washington Post, the camera again pulling back to suggest their small place within a city of secrets. And of course there are the multiple shots within the newsroom depicting Woodward and Bernstein making their calls and typing their stories from unspectacular desks nearby other reporters at equally unspectacular desks doing more of the same. For the latter, cinematographer Gordon Willis regularly employed a split diopter, capturing in equal focus the reporter in the foreground, usually Redford’s Woodward, and the activity of the newsroom behind him. These shots remind that long before Watergate was an A-1 headline it was buried “in the middle,” just another story fighting for attention.

Willis’ split diopter is also used to provide historical context. In one scene, a TV in the foreground shows Nixon receiving the Republican nomination for a second term as Woodward, in the background, hammers away at his typewriter. Nixon is an elusive figure in this film, rarely mentioned or shown – a sign of how long it took the Watergate story to unfold before Tricky Dick became forever linked with the scandal. Woodward and Bernstein are too green or too innocent to even suspect the president’s involvement. They investigate their stories not with a zeal to turn power on its head – although an effect of Watergate would be to fill college journalism programs with idealistic reporters hungry for blood – rather, Woodward and Bernstein are determined to report their developing story to its fullest, no matter where it leads them. Often those destinations are less than glamorous. A good chunk of the film shows Woodward and Bernstein knocking on doors and crossing off names. They interview secretaries and aides, painstakingly drawing information out of their subjects and then struggling just as mightily to find another source who will confirm it. They sift through phonebooks and receipts. In between, they doodle (Woodward) and smoke (Bernstein). They don’t triumph over their story so much as they persevere.

Although All the President’s Men could be casually described as a film about two journalists taking down a corrupt president, the film is surprisingly free of any grand emotional crescendo. There’s no point in which Woodward or Bernstein are transformed from grinding members of the workforce into patriots, ala Norma Rae scrawling “UNION” on a piece of cardboard in a brave act of defiance. They begin the film as wide-eyed reporters and they end it that way, too. The film’s penultimate scene shows Nixon’s second inauguration on newsroom TVs as Woodward and Bernstein write the stories that one day will bring down Nixon and make them famous, but not quite yet. That’s why the film’s most imposing character isn’t Woodward or Bernstein but Hal Holbrook’s Deep Throat, the cryptic all-knowing guy in the trench coat, who by stepping out from the shadows in a parking garage became America’s fantasy image of the anonymous source. He is a movie character, straight out of film noir. Woodward and Bernstein are more like extras in an epic production, unaware of how close they are to the spotlight – until all of a sudden they’re in it. Reminiscent of Willis’ split diopter shots, All the President’s Men is about the seemingly mundane activities of the background coming into equal focus with the attention-grabbing stuff in the foreground. Heroes didn't make that happen. Two guys with notebooks did.
Posted by Jason Bellamy at 6:21 AM

Great film. The CITIZEN KANE of journalism movies. I also really love Gordon Willis' cinematography and the noirish vibe he creates in the scenes where Woodward meets Deep Throat in a parking garage late at night. The use of shadows in these scenes is incredible and certainly create a feeling of unease and tension as you don't know what's going to greet Woodward when he gets there. The feelings of paranoia gradually increase with these scenes.

What I always loved about the film was showing how much of an effort it took for Woodward and Bernstein to get this story right. It's almost amazing how Bradlee calls them out on errors that news editors today would let pass in the journalists-as-stenographers age.

The film now does feel like a celebration of a certain tenacity as well as the importance of leg work and fact-checking that is absent these days. It is odd that a movie I first saw at a young age to learn about why Nixon resigned is now a nostalgia piece about how journalism used to be.

Well, Blogger just ate my first attempt at replying. So now this will be brief.

JD: I love the increasing paranoia, too, and particularly that the movie never suggests whether these guys should fear for their lives. The movie ends with the suggestion that their lives are in danger, but that assessment is balanced out by the scene in which Woodward runs frightened from the parking garage and turns back to find ... nothing whatsoever behind him. Rather than showing us shadowy figures, the film just acknowledges that there were shadows. What was in them, who knows?

Steven: One of the things that's changed most about journalism is newspapers' willingness to accept anonymous sources. Most reporters must reveal the identity of those sources to their editors, but there's just not the same pressure to get names associate with the printed record.

I love the accuracy with which this film recreates the newspaper world of that ear. My dad is a career newspaperman, and the Post office here reminds me of newsrooms I saw as a kid. (Also, photos of my dad from that era show him to be a strange combination of Redford and Hoffman in this film in terms of dress and hair style.) To this day, my dad still doodles in his notebooks as Woodward is seen doing in this film.

As for the effort: Watching this film, or Zodiac, is a pleasure because it takes us back to an era in which leg work and fact-checking and general investigation could be so dramatic and cinematic. I'm stunned at the popularity of all those CSI type shows, because now shows are just trying to find ways that DNA evidence and quick Google searches won't provide an immediate answer. It's historically truthful, it just isn't as compelling to watch. That's why I love the scene in this film in which Woodward is amongst a pile of out-of-town phone books, just searching for one name. That shot tells us everything we need to know about his commitment and effort. Showing someone feverishly typing out a Google search just isn't the same.

As a wannabe journalist I obviously love this film. It really does look incredible compared to the current state of things: my professors don't even bother to check to see if we're being accurate and digging deep. I know some people who have just made up whole stories. In the actual journo world, the ability to draft a glorified press release has replaced what W&B did.

Who can forget Judy Miller's bullshit self-apologia when it became evident nearly all her stories on WMDs were wrong? Her half-assed mea culpa said that when a source is wrong, the journalist is wrong, when really a journalist could have said that source was wrong and shown how instead of copying things down verbatim.

Plus, the construction is just magnificent. I really enjoy The Parallax View but feel it is too disjointed between great scenes of paranoia. ATPM maintains its sense of dread and therefore can keep building it instead of having to double back all the time. Obviously its modern corollary (in terms of production date, at least, not setting) is Zodiac, which was equally wonderful in its sustained tension.

What is most notable about the film is it's total LACK of pretense and the kind of shallow, cardboard characterization that is so prevelant in modern cinema. Woodward and Bernstien are NOT depicted as noble warriors, but rather as ambitious and opportunistic, as well as being gifted journalists. Ben Bradlee comes off as an older, wiser version of the duo, but with one important difference. he understands the full import of the story and it's far-reaching ramifications.