A Pawn in the Game: The Conspirator 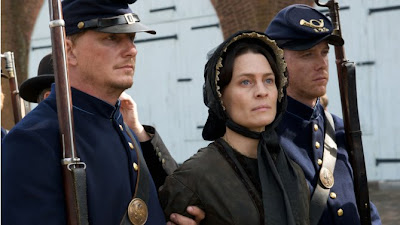 Robin Wright has a face of contradictions: soft blond beauty made out of firm features and a cold stare. It’s a face that welcomes us close but that never really lets us in. When Wright smiles, the expression seems sincere but rarely entirely carefree. It’s as if her mind is elsewhere, working out some problem much more significant than whatever she’s doing, or simply thinking three steps ahead of whatever is going on. On screen or in public, she’s a little aloof and a lot hard to read. That’s why Wright is a terrific choice to play Mary Surratt, the proprietor of a Washington, DC, boarding house that served as a meeting place for those accused of conspiring to assassinate President Abraham Lincoln, Vice President Andrew Johnson and Secretary of State William H. Seward on April 14, 1865 – among them Mary’s son John Surratt and, of course, John Wilkes Booth. Mary Surratt was hanged as a fellow conspirator less than three months after the assassination plot was carried out (to varying degrees of success), but her actual role in the affair, and even her awareness of it, has been a subject of debate ever since. Played by Wright in Robert Redford’s The Conspirator, Mary Surratt isn’t just an ambiguous figure, she’s an enigmatic one, too. More than questioning what Surratt did or didn’t know, Wright makes us wonder how Surratt feels about the whole mess.

Mary Surratt is a complex figure, to be sure. Mastermind or just mother? Lincoln hater or family protector? Does Mary resent her son for not coming forward, or does she blame herself for her son’s flight? Wright’s subdued performance makes it hard to say and compelling to wonder. Watching Wright in The Conspirator is a reminder of how underutilized she is – not just in cinema in general but also in this film specifically. Although by title Surratt is the focus of The Conspirator, in actuality she’s nothing more than a supporting player in a picture that’s less about her than about the trial in which she was convicted and less about the events of the past that it portrays than about the events of the present to which it alludes. Redford’s film may have the whiff of a History Channel reenactment, but above all else The Conspirator is a metaphor directly challenging the legality of the upcoming trials of Khalid Sheikh Mohammad, the alleged mastermind of the 9/11 terrorist attacks, and his coconspirators, who like Mary Surratt before them will be tried via military tribunal, rather than in civilian courts. Written by James D. Solomon, The Conspirator repeatedly argues that a conviction can only be just if it is achieved through just means, via a civilian trial in which guilt isn’t assumed ahead of time.

Of course, that’s an easier case to make when Mary Surratt takes the shape of the willowy Wright (the real Surratt had hips), and when she’s portrayed as nothing worse than a protective mother who believed that her son was "only" out to kidnap Abraham Lincoln in order to ransom the president in exchange for southern prisoners of war. (It’s actually quite shocking how innocent the film makes a presidential kidnapping sound, as if the conspirators meant to “just borrow” the president for a few hours, like neighbors sharing a wheelbarrow on a sunny summer afternoon.) It’s also an easier case to make when John Surratt (Johnny Simmons) is portrayed as a soft-featured innocent, a young Southern idealist who falls under the influence of the sinister Booth. In the court trial that takes up more than half of the film’s 123-minute running time, we hear that John Surratt had weapons waiting for Booth that April night, and that Mary knew about them. But because these events aren’t actually depicted on screen they come off like myths deviously manufactured by the prosecution to ensure Surratt’s conviction. I don’t say this to oppose The Conspirator’s moral stance about the judicial process. I mean only to point out that Redford has done just as fine a job of stacking the deck to support his desired outcome as the U.S. government seems to have done to ensure its desired outcome in the trial of Mary Surratt.

To Redford’s credit, though, he has layered his editorializing within a drama that satisfies as historical reproduction. Speaking as someone who has done a decent amount of reading about Booth and the assassination plot (I strongly recommend American Brutus, as well as Manhunt), and who routinely passes by Ford’s Theatre on Saturday movie excursions (often lunching at a restaurant that occupies the former footprint of Herndon House, where Booth first announced his assassination plot), the film’s attention to detail is impressive. The sequence near the start of the film depicting the simultaneous attacks on Lincoln and Seward, and the aborted attack on Johnson, is a gripping bit of parallel storytelling that does well to evoke the brutality and intimacy of the attacks, as well as the chaos of Tenth Street afterward, as Lincoln is carried to what will be his deathbed. Likewise, Mary Surratt’s final moments at the Washington Arsenal are expertly recreated, right down to the black umbrella that shields her from the sun during her walk to the gallows. The Conspirator was shot in Savannah, Georgia, but it feels like Washington, thanks in part to a few stunning CGI shots that depict the White House amidst mostly undeveloped land and in front of a Washington Monument that has just begun its climb toward the sky. Thanks to all this, The Conspirator has atmosphere, which is more than could be said for Redford’s previous directorial effort, Lions for Lambs, which is less a work of drama than an academic exercise captured on film.

That said, the ambience of this film is thicker in some scenes than others. It’s hard to overlook that much of The Conspirator is distinguishable from an episode of Law & Order by costume alone. The protagonist of the film is James McAvoy’s Frederick Aiken, a young lawyer given the unenviable task of defending a woman no one in the north wants to see set free. The rhythms of the trial are like any courtroom drama about the presumed guilty: Aiken is reluctant to take the case at first, but before long he’s risking his relationship and his professional and social standing by going all-in in the name of truth, justice and the American way. Same old, same old. By dedicating so much attention to the trial, Redford neatly sidesteps Mary Surratt’s culpability while waving his finger at those who condemned her – and, thus, by extension chastising the current government for the military tribunals coming up. Alas, Redford also sidesteps Mary Surratt, a complex figure who isn’t given enough screen time to become a complex character. Just as before, Mary Surratt, guilty or innocent, remains a pawn in the game.
Posted by Jason Bellamy at 4:28 PM

What did you think of McAvoy's stirring climactic speech? "Surratt? I wanted to get the Theater. But the truth is...the Theater's gonna get us."

Actually, I haven't seen this, and will probably catch up to it on DVD, seeing as you describe the film exactly as I imagined it. Terrific review, though, your thoughts on the qualities of Robin Wright (no longer Penn, thank God) particularly illuminating.

Will see this when it makes its way down to Cape Cod, but it was very clear to me from the preview that this would be the kind of film you depict here - very much a History Channel reenactment, very much a been-there-seen-that courtroom drama (one of my least favorite kind of drama). I also imagined, if I were making this film, I would start with parallel editing of the various parts of the plot that went on that fateful night, and I'm glad to hear that Redford had the same idea.

Also from the preview I noted what is my pet peeve about recent depictions of the Civil War period. All the costumes and uniforms look so clean! D.C. was a dirty, dusty, muddy place at that time and they look so neat and clean. I haven't seen the movie yet, and maybe it's just the preview, but it looks too much like a reenactment in which atmosphere is not that important.

Craig: Thanks. I have to say, sometimes when I've seen photos of Wright over the past 10 or so years, I've wondered if that look of preoccupation was a sign she was thinking, "My husband is fucking exhausting." That said, I admit I was strangely saddened when I heard the news, only because it seems that if someone can put up with Penn at all these days, there must be genuine love there.

Hokahey: Well, yeah, everyone in this movie is pretty clean. I give you that. Still, I think you'll find the recreations stirring enough to make this film somewhat enjoyable. That said, it only heightens my interest to see what Spielberg might do with similar scenes, if he ever gets his Lincoln movie made.

Yeah, Jason, the only thing THE CONSPIRATOR did for me is make me look forward to Spielberg's Lincoln film. I've always given Redford some leeway, even when he ineptly directs a film, because there is usually an underlying passion to his work. Here, I only got occasional moments of that (mostly in the flashback scenes).

I could overlook the film's problematic comparisons to Guantanamo (the use of a military tribunal is an inherently greater lapse in judgement when it comes to citizens versus non-citizens). But I had more trouble overlooking some of the miscasting. I find it hard to take some of the younger cast memebers (McAvoy, Long) seriously in weightier roles despite the addition of mustaches and beards (the fact that they aren't real distracts even further) to age them.

All this being said, Robin Wright is excellent in the film and the sole reason to see the movie.

It's not a radical work by any means, but I seemed to have enjoyed this film more than everyone here. Jason does have a point about how Mary Surratt remains a little too cold a character to carry the emotional weight of the film. All the same, I don't think I could ever really bring myself to pan this film, since there's nothing terribly wrong with it. It could have been bolder and it certainly could have had a greater scope, but I have a feeling it will age nicely.

My hunch is that future cinephiles will look back and ask, "Why did The Conspirator get such a bad rap?" Redford does, after all, do about as good a job as anyone could have with this screenplay. It did, at the very least, open me up to details about the assassination which I had previously been unfamiliar with.

And I'm surprised nobody has yet picked up on the inside joke in Craig's comment about McAvoy's "climatic speech" at the end. Hehe...

Tony: Yeah, Jason, the only thing THE CONSPIRATOR did for me is make me look forward to Spielberg's Lincoln film.

Yeah, even though I got more enjoyment out of this one than you did, even in the moments when I appreciated the film's attention to historical detail there was a voice in the back of my head wondering what Spielberg will get out of the same.

Adam: My hunch is that future cinephiles will look back and ask, "Why did The Conspirator get such a bad rap?"

I suspect that might be true, but for a different reason than you might be suggesting. Fifteen years from now, all the present-day allusions won't seem as forced or as blatant. It will allow the film to be seen first as a historical picture and second as a metaphorical op-ed. Given that this film does best when recreating history, I think that will work in its favor.