Old Times They Are Not Forgotten: Ghosts of Ole Miss 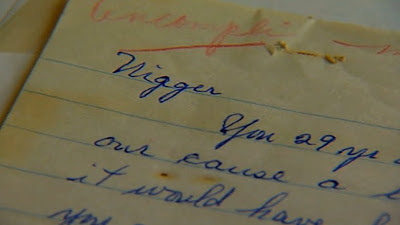 "What is the cost of knowing our past? What is the cost of not?" That's the quandary driving Ghosts of Ole Miss, the latest entry in ESPN Films' "30 for 30" series, which pokes at a 50-year-old wound that for many Mississippians has never quite healed. Back in 1962, the University of Mississippi's first black student enrolled on campus, flanked by military escorts, in peaceful defiance of a violent revolt by the university's student body, and others within the community. On the night of September 30, 1962, James Meredith slept peacefully in a dorm room as Mississippians protesting his admittance clashed with the hundreds of U.S. Marshals and military police sent by President John F. Kennedy and Attorney General Robert F. Kennedy to protect his constitutional rights. Guns were fired. Molotov cocktails were thrown. More than 200 were injured and two died. It was the darkest day in the history of Ole Miss — a day many who lived through it would like to forget. And yet it happened in the same year that Ole Miss' football team turned in a season to remember, going 10-0, winning the Sugar Bowl, and missing a chance at the national title perhaps only because the university's reputation had been sullied by the campus violence.

How does one come to terms with the conflicting emotions brought on by those respectively shameful and celebratory events? That's not the exact question that writer and narrator Wright Thompson asks in this documentary, directed by Fritz Mitchell, but Ghosts of Ole Miss is very much about the challenge of archiving a community's, university's, family's or individual's checkered past. Thompson is a 36-year-old Mississippi native who is proud of his heritage but also uncomfortable with Mississippi's selective memory. How is it, Thompson wonders, that he never learned about James Meredith in school? What does it mean if his own family members (or neighbors, or acquaintances) refuse to acknowledge their role in Mississippi's regrettable past? How does one pay respect to an ancestry that's riddled with ideas, events and traditions that history has rendered unfashionable at best and revolting at worst? This is a documentary that recounts the past as a means to wrestle with it in the present.

Silencing our nightmarish memories of There's No Place Like Home, Ghosts of Ole Miss is a positive example of the first-person documentary — classy, thoughtful and worthy of our attention. Throughout the picture, Thompson expertly walks the documentary storyteller's tightrope, balancing an archivist's recounting of the facts with personal reflection. Made by a non-Mississippian, Ghosts of Ole Miss might have come across as unsympathetically scathing. With Thompson guiding the picture, however, the documentary is repentantly scathing, which is far more interesting. At its best, the film isn't just a needed history lesson but also a journey into the soul of a man who admits he's moved to tears when he hears "Dixie," because it inspires memories of his father, even while he's aware that the Southern anthem is loaded with repulsive subtext for African-Americans and non-Southerners. Ghosts of Ole Miss didn't need Thompson in particular, of course, but he's a refreshingly articulate narrator, and Mitchell lets Thompson guide the way autobiographically without becoming an overbearing presence only capable of drawing attention to himself.

The oddity of this sports documentary is that it's only loosely linked to sports at all. Thompson begins the film by saying that he's always been fascinated by the 1962 Rebels, which I'm sure is true, but for the most part the football angle seems tacked on to meet the minimum requirements of the "30 for 30" series. If that sounds like a criticism, it isn't meant as one. Mississippians may choose to remember otherwise, but Ole Miss' undefeated football season isn't remotely as significant as Meredith's enrollment and the unrest it inspired, nor is the old game footage as fascinating as the audio recordings of the Kennedys talking to Mississippi governor Ross Barnett, first in an attempt to prevent campus violence and then in response to it. Even while Mitchell's film places some of the Ole Miss players at the scene of the riot and utilizes them as eyewitnesses to an important moment in civil rights history, Ghosts of Ole Miss maintains appropriate perspective by keeping football mostly on the sidelines. That said, the football angle is still significant, not just because sports have been a leading force for racial integration in this country, or because football is so intrinsic to Ole Miss culture that President Kennedy cited it when encouraging the university to act with honor, but also, and most importantly, because the reverence reserved for the undefeated Ole Miss team tells us a lot about our culture — not all of it flattering.

Throughout the film, Thompson and others credit the football team for rising above adversity and helping a university and community heal. But the argument could be made that Ole Miss' undefeated season was the worst thing to happen to that university. It created pride for a community that should have felt ashamed. It allowed Ole Miss to forgive itself, presuming it regretted its behavior in the first place. It bolstered, one would assume, feelings of white superiority that were already thriving (stating the obvious: all of the players on the team were white). It created an atmosphere in which the athletic success of a football team supposedly said more about the character of a university than all the threatening letters sent to Meredith, or all the slurs lobbed in his direction. If ever there was a university that needed to look in the mirror and feel nothing but disgrace, wasn't it Ole Miss in 1962? Isn't it possible that the undefeated football team only helped Mississippi do the very thing Thompson criticizes it for now: look away from its unpleasant past as if it wasn't there?

Thompson doesn't explore that specific line of thought, nor does he cite its potential. Thus, Ghosts of Ole Miss regrettably embraces the kind of myth-making tactics that kept everyone from seeing the truth about Joe Paterno or Lance Armstrong: it links victory with virtue. Still, there's no doubt that these are the kinds of arguments that Thompson and Mitchell hope this film will inspire, and to criticize Ghosts of Ole Miss for its over-glorification of the football team is to ignore that the documentary uses sports to prompt a reexamination of a more significant, non-sports event that so many Southerners would like to leave behind. What is the cost of not knowing? Thompson answers his own question: ignorance. Ghosts of Ole Miss could be called too forgiving, but it forces those who want to celebrate the 1962 Rebels for rising from the ashes to begin by staring into the flame.


Ghosts of Ole Miss premieres tonight on ESPN at 8 pm ET, and will rerun frequently thereafter. The Cooler hopes to review each new film in the "30 for 30" series upon its release.
See the Volume 1 and Volume 2 archive.
Posted by Jason Bellamy at 6:16 PM

Good conversation about this one in my classes today. Contemporary college students find it hard to believe they live in a world where, for some people, this essentially happened just a moment ago. Nice write-up.

While it's hard to imagine a losing season making this community face its ugly side, it may have kept it from forming outsized illusions of itself. Therefore, I agree with your assessment that the winning season brought some unpleasant, unintended consequences with it. For another "30 for 30" film that deals with racism and sports, you have to see No Crossover: The Trial of Alan Iverson, in which Steve James is the local boy/documentarian who finds a community very reluctant to talk about the racism underlying the incident.

Mark: That's really well said. I'm 35 and the older I get, the more stunned I am at the proximity of my own life to events like these. Thanks for the comment!

Marilyn: I reviewed No Crossover when it came out (it's in the archive on my site). In that film, and this one, there's something compelling about watching people who struggle to face the realities of their past. You're right, of course, that a losing season wouldn't have made the community face anything. But, yes, at least success on the football field couldn't have been used to distract from the atrocities on campus.