This Time With Meaning: Survive and Advance 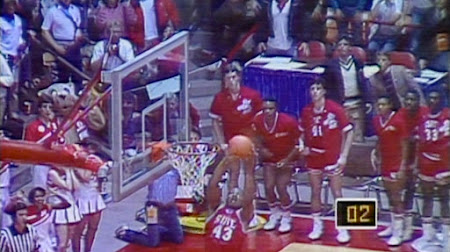 Dereck Whittenburg receives the awkward one-handed fling from Thurl Bailey less like the targeted shooter in the closing seconds of a national championship basketball game than like a defensive back intercepting a wayward pass before it sails into the bleachers. From nearer to half court than the 3-point arc, Whittenburg gathers the ball, turns, takes a deep knee bend and fires. It's a moon shot, and at the very moment it becomes obvious that the ball won't reach the rim Lorenzo Charles leaps into the frame, collects the ball near the iron and drops it into the hoop as time expires, giving North Carolina State a 54-52 upset victory over the University of Houston and sending the Wolfpack's flamboyant head coach Jim Valvano running around on the court looking for someone to hug.

It's one of the most famous sequences in college basketball history — memorable because NC State wasn't supposed to have a chance against Houston in that 1983 NCAA championship, memorable because Valvano's reaction reveals both his shock and his spirit, memorable because the game-winning bucket and Valvano's reaction are so charmingly inelegant and, last but not least, memorable because CBS and ESPN play the hell out of that highlight clip each March. If you're even a little bit of a college basketball fan, you've seen that play at least a dozen times. It's the quintessential March Madness moment and it's something of an eternal flame for Valvano, the beloved coach, broadcaster and motivational speaker. That said, the ubiquity of the NC State upset highlight is the very thing that made me skeptical about Survive and Advance, the latest edition of ESPN Films' "30 for 30" series, which seeks to climax with a sports moment that is as worn from overuse as a child's favorite toy. In the original "30 for 30" volume, director Jonathan Hock did a marvelous job reviving the forgotten legend of Marcus Dupree, but I wondered if he could be as successful crafting drama and insight from a story that is already so familiar.

Turns out, he was ready.

Indeed, Survive and Advance gives due analysis to that game-winning play (all it's missing is Kevin Costner as Jim Garrison saying "back and to the left"), but what it does more impressively is to provide the play with emotional meaning through context — which is to say that Hock's film makes that highlight matter again. It's one thing to watch that clip and remember that NC State was an underdog even before it met up with the "Phi Slamma Jamma" Houston team starring Hakeem Olajuwon and Clyde Drexler, but it's another thing to really see it and feel it. Hock's documentary backs up to show us the improbable path that brought the Wolfpack to that one shining moment — a route that included numerous come-from-behind victories that would seem unbelievable even today that were even more miraculous in the pre-shot-clock era when teams could sit on even a mere 2-point lead for, well, as long as they wanted. NC State didn't just win these do-or-die games in the NCAA Tournament but, before that, in the ACC Tournament, which the Wolfpack had to win to gain entry into the big dance. In the nine-game run that closed out their season, NC State survived not one but two matchups with 7-foot-4 center Ralph Sampson, got through Michael Jordan's North Carolina Tar Heels and defeated Olajuwon on a night he scored 20, pulled down 18 boards and blocked 7 shots. And they did it all with a roster of players you wouldn't remember today if they hadn't done the unforgettable.

At 100 minutes, Survive and Advance is one of the longer documentaries in a "30 for 30" series that tends to do better at half that length. But after a slow start, Hock's doc repeatedly earns its running time. It's packed with interviews and roundtable reminiscences from the surviving members of that team, and it gets in its fair share of Valvano highlights from archival press conferences and speeches. But the film's strength is its game footage, which captures college basketball at a time when it was simultaneously more developed, less advanced and more joyously idiosyncratic than it is today (you gotta love some of these players' form on free throws!) and it blessedly lives up to and even surpasses the Cardiac Pack's rosy legend. Don't get me wrong: the Wolfpack's title run isn't pretty. NC State repeatedly earns victories by virtue of their opposition choking at the free throw line. It might not sound like gripping sports drama, but it becomes just that by virtue of the frequency with which the Wolfpack survives sure defeat.

Equally important, the rare chemistry that NC State players had with their charismatic coach is supported by the archival footage, too: Again, it's one thing for grown men to speak eloquently of Valvano's influence on them 20 years removed from his tragic death, but it's another thing to see Bailey, as a quiet collegian, say in a routine interview that he and his teammates "really believe in Coach V," or to see Whittenburg picking up his coach after numerous wins and kissing him on the cheek in the post-championship press conference. With a light touch, Hock repeatedly demonstrates that the 1983 NC State team was special long before they were champions, and that they deeply loved Valvano long before he became a figure of national admiration and sympathy through his battle with cancer.

There's still an air of hagiography to any depiction of Valvano, despite Hock's attempts to highlight the coach's faults without getting too far off topic, but, man, it's hard to feel as if Valvano doesn't earn it. Sure, you can see why he'd have rubbed some people the wrong way; even if you thought he was saintly you could find the volume of his saintliness overwhelming. But there's a sincerity to his spirit that makes you want to forgive his obvious need for attention. In his famous ESPY's acceptance speech, which Hock chronicles, Valvano urged everyone to strive to laugh, think and be moved to tears every day. Hock directs Survive and Advance as if he's trying to help us meet our daily quota. Hock's picture reminds us of what we love about sports and cinema.


Survive and Advance premieres tonight on ESPN at 9 pm ET, and will rerun frequently thereafter. The Cooler hopes to review each new film in the "30 for 30" series upon its release.
See the Volume 1 and Volume 2 archive.
Posted by Jason Bellamy at 8:30 PM

I liked the structure of "Survive and Advance." Many of the 30 for 30s have been unimaginatively linear, and so I was expecting more of a standard rise-and-decline narrative (b-ball in the first hour, cancer in the second). Some may see holding off the Lorenzo Charles climax as supplying a feel-good ending, but I think Hock's point is that, with Valvano and his legacy, all these parts are integrated and moving simultaneously. They glossed over the violations a bit, as you said, but then I'm half-surprised they were mentioned at all.

Craig: I'm glad you mentioned the structure. I meant to point that out in my review.

At the point they bring up Valvano's cancer diagnosis and death it seemed like odd timing, but the doc is much better for it, because by distrupting the tired linear trajectory (any break from the norm is nice) it keeps us focused on the content as it unfolds, rather than waiting for Hock to touch each base, if you forgive the baseball metaphor.

As for the violations, yeah, I'm torn on that one. Covering that ground is necessary to offset the impression that the doc would have otherwise created, that Valvano was flawless. But beyond that, the violations really have nothing whatsoever to do with the 1983 do-or-die championship run, and so to focus on them at length would have been to get lost in a scandalous aside. So the more I think of it, the more it feels like the right kind of balance for THIS story, whereas if this were a straightforward Valvano profile I'd say it was certainly unbalanced.

Despite the somewhat nonlinear approach, there's certainly a lot of convention in this doc; nothing about it is as stylistically daring as JUNE 17, 1994 or WINNING TIME, and it doesn't feel Important the way THE TWO ESCOBARS does. But it's fitting that SURVIVE AND ADVANCE succeeds much like the team it profiles: on solid fundamentals and spirit. (I suppose that should have been in my review, too. Ugh.)