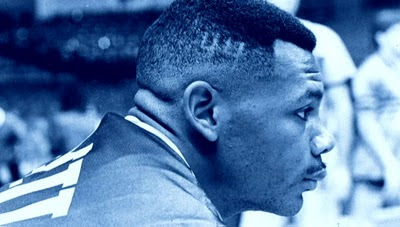 As a standout basketball player for Loyola Marymount University, Hank Gathers was all the things that sports fans love to celebrate. He was talented, for starters, but perhaps more importantly he was tough, relentless, charismatic, passionate and inexhaustible. He was the type of athlete that fans and coaches like to say played with a big heart. And yet when it comes to Gathers we don’t dare utter those words because, sadly, they’re all too true. Gathers really did have a big heart, and, in a depressing irony, it was that physical abnormality that helped to trigger his sudden and sickening on-court death just over 20 years ago. One moment Gathers was slamming home the business end of an alley-oop. The next moment he was flat on his back. A few moments later, he was being lifted onto a stretcher in front of a horrified crowd that was as silent as Gathers’ body was lifeless. Hank Gathers, once the nation’s leading scorer and rebounder, was dead at the age of 23. Sport went from ecstasy to catastrophe, just like that.

If you’re a fan of college basketball, you surely remember Gathers, or, perhaps more accurately, you can’t manage to forget him. Gathers’ death and the inspired performance by his teammates that followed it respectively rank among the most tragic and then uplifting sports stories of the past three decades. That’s why it’s entirely appropriate that these events should be remembered in ESPN Films’ “30 for 30” documentary series, and that’s why it’s altogether puzzling that they aren’t the explicit and exclusive focus of Bill Couturie’s film, Guru of Go. No, as you might be able to tell from the title, the film isn’t the Hank Gathers story or even the Loyola Marymount story. It is instead a profile of Gathers’ head coach, Paul Westhead, the mastermind of the fast-breaking, hard-pressing, never-resting offense that Westhead called “The System.” Couturie’s film is the documentary that should have been made had Gathers lived and led Loyola to a national title, dominating all-comers with an offense of organized chaos. Trouble is, that’s not what happened.

That’s why framing the Gathers story, or the Loyola story, as the Westhead story comes off as disingenuous or foolish, or maybe both. Couturie might have been trying to keep his documentary from feeling like a snuff film, something callously exploitive or unbearably grotesque, but to embed the Gathers tragedy within the tale of a vagabond coach who is steadfastly devoted to his unorthodox “System” is to either bury the lead or to entirely miss the point. When sports fans think of that Loyola team, they almost certainly remember Gathers first, teammate Bo Kimble second and the pedal-to-the-metal offense third. The guy who orchestrated the offense would rank fourth, if he’s thought of at all. Westhead might have been the figurehead going into that 1989-90 season, but he’s a supporting player in its history. The cold hard truth is that without Gathers’ death, Westhead isn’t worthy of “30 for 30” treatment. Couturie is wise to give the events of that season some context, but a deeper, more detailed understanding of Gathers’ upbringing would have served this film better than an account of Westhead’s tenure with the Los Angeles Lakers, the Denver Nuggets or the Phoenix Mercury – coaching campaigns that most sports fans will file under the “Who cares?” category.

Even more troublesome, this misguided infatuation with Westhead also leads to the film’s clumsiest gimmick: In a nod to the former English professor’s fondness for dropping lines by the Bard, Guru of Go is separated into mini-chapters that are framed by famous Shakespeare quotes. It’s bad enough that the quotes pop up on the screen like slides from a PowerPoint presentation at a lame motivational seminar for white collar professionals. What’s worse is that they thwart the film’s ability to generate narrative momentum. By pounding us with these Shakespeare titlecards that in many places are only a few minutes apart, Guru of Go doesn’t develop thematic cohesion so much as it illustrates the shallowness of its snatch-and-grab approach. It’s as if Couturie is trying to will his film into being about something more than Gathers’ death, and yet somehow he overlooks that the best way to do that would be to dedicate more time to Gathers’ life. A profile of Westhead should be a lengthy chapter in the story of Gathers or his Loyola team, no question. What Westhead shouldn’t be is this story’s cover and spine.

In the film’s uninspired moments, and there are a handful of them, Guru of Go is the most pedestrian documentary of the “30 for 30” series through nine episodes. But what’s amazing is how little its flaws matter in the end. Despite the film’s wanderings, despite all that it might have been, when Guru of Go gets to Loyola’s 1989-90 season, the documentary is overpowering. No matter how many times you’ve seen the footage, watching the vital, exuberant Gathers tumble to the ground is shocking. Seeing Gathers’ family huddled around his inert body is gut-wrenching. Watching Gathers’ former teammates struggling to remember that day two decades later is heartbreaking. As Gathers’ teammates struggle for words in thoughtful talking-head interviews, you might find yourself struggling to breathe. And not for the last time. The beauty of sports is that it can heal as swiftly as it hurts. And so, to his credit, Couturie spends just as much time chronicling Loyola’s NCAA tournament run as he does on Gathers’ death before it. The team’s victories over New Mexico, Michigan and Alabama, to reach the Elite Eight, are uplifting even in brief. But nothing is more moving, or more memorable, than Kimble’s in-game tribute to his fallen friend: a left-handed free throw in the midst of March Madness that finds nothing but the bottom of the net.

To watch Couturie’s documentary isn’t to just see these moments again. It’s to feel them, too. It’s a film that most certainly could have been better, particularly if in content and title it had been Hank the Bank, instead of Guru of Go. But if providing 30 filmmakers with complete artistic control means suffering a few letdowns along the way, it’s a small price to pay for the “30 for 30” series’ exciting diversity. Guru of Go doesn’t sing like the operatic Winning Time. It doesn’t tuck us under its arm and rush us forward like The U. But what it does do is put the usual concerns of sports into perspective, reminding us that winning isn’t everything. What it does do is reveal that an awkward, weak-handed free throw can be as poignant and poetic as anything William Shakespeare ever wrote.

Guru of Go premieres tonight on ABC at 4 pm ET, and will rerun frequently thereafter. The Cooler will be reviewing each film in the “30 for 30” series upon its release.
Posted by Jason Bellamy at 1:00 AM

This series, with its unrepentant nostalgia for the basketball legends of my childhood, has me by the stones. I recognize that I'm being pandered to, and than I'm old enough now to feel nostalgia for this era like the baby boomers must feel for the Yankees and Reds teams of the 70s, and I am totally into it.

Really, Westhead? The coach Magic Johnson ran out of the Lakers organization on a rail? Wasn't he also implicated in the lawsuits that followed Gathers' death? Bo Kimble would have been a logical and far more effective frame-of-reference. The Hank Gathers tragedy was just as cataclysmic as Len Bias; too bad their stories have made for two of the weaker episodes of this series.

Westhead, as you probably are aware of, is now the head coach of the Lady Ducks. I caught a couple of their games this year on the local feed, and I have to say that his style is extremely entertaining...even to a person like me who doesn't even really care about woman's basketball; however, it was hypnotizing and entertaining enough for this causal viewer to stop what he was doing and pay attention for more than five minutes. I'm looking forward to this short film because I want to see what Westhead's psychotic style looked like in the realm of men's basketball.

Here's one fan's perspective on the Gathers story from a guy who was at that LMU-Michigan game.

Excellent movie because I got different feelings when I watched it, specially because the main character knows how to do his work perfectly,. I love his performance.